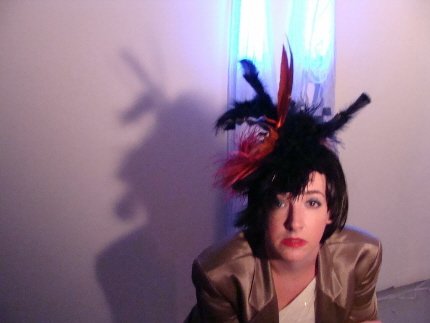 Editor, consultant and fashion icon Isabella Blow lived what can only be described as a tumultuous life that encompassed trend-setting style, two marriages plagued by infertility, championing designers like Alexander McQueen who then left her behind, coping with her brother’s drowning when they were children, battling ovarian cancer, trying electro-shock therapy to counteract depression, attempting suicide several times until she succeeded by swallowing  weed killer, although it took her hours to die.

So, of course, Mad Cat Theatre Company is turning her life into an entry in the annual South Beach Comedy Festival for two shows on Wednesday, April 17.

Charming Acts of Misery is a 45-minute workshop of a play being developed for a longer, fuller production this August by Jessica Farr, the co-author of Mad Cat’s Hamlet Dog and Pony Show last season.

For 13 years, Mad Cat has developed a reputation not for pushing the edge of the envelope, but shredding it with highly-stylized and thought provoking plays.

“What really kind of triggered me is that even though there’s a lot of tragedy, there’s a lot of humor,” Tei said about the life of British-born Blow. “It’s the case of the English having  an uncanny ability to find humor while keeping their dignity. As opposed to the American fable, which usually has an upward trajectory, someone ascends and then falls. With the English, there’s a lot of little roller coasters that occur throughout their lives.”

The challenge was to find and highlight the humor. “It’s very much a love letter to someone who left us way too soon. Yes, we understand her pain, and it’s not a wonderful life, but you feel regretful that you never got to hang out with her,” Tei said.

Although she fought depression much of her life, Blow was a major figure from the mid-1980s to her death in 2007, much of it as a journalist for the British Tatler, Sunday Times Style and the American edition of Vogue. Besides buying McQueen’s first graduate school collection, she championed milliner Philip Treacy, discovered supermodels Sophie Dahl and Stella Tennant, and counted among her friends Rupert Everett, Andy Warhol, Roy Lichtenstein and Jean-Michel Basquiat.

Blow, whose outsized sense of style included signature hats by Treacy, fits Mad Cat’s edgy aesthetic. Set in the last hours of Blow’s life, “memories of her past tend to blur together to create this narrative of what it is she’s looking for,” Tei said. The troupe has talked about trying to create a sense of Alice in Wonderland meets movie director Wes Anderson via a Fellini sensibility that Blow enjoyed.

To get there, Tei and Farr have brought together an intriguing cast starting with one of Mad Cat’s repertory members, Erin Joy Schmidt as Blow. Tei and Farr have been talking to Schmidt about the role for some time. “She’s the best actress I know down here, in her age range anyway, and she has that versatility and commitment level,” Tei said.

Schmidt is equally a Tei fan: “There’s a handful of great directors down here, like Joe (Adler of GableStage) and Paul. People forget what a great director he is. They see this image of him and they forget he has an MFA in directing from DePaul. We kind of speak the same kind of language.”

She has been working with him almost since she moved to Florida in the mid-2000s. “I would not be working down here if not for Paul. He was the first person who saw talent in me. I auditioned for everyone and could not get a job. He saw me in one thing and he became a champion of my work.”

This part has been a welcome challenge for Schmidt who has been balancing new motherhood with recent parts in Palm Beach Dramaworks’ Talley’s Folly and Actors’ Playhouse’s Other Desert Cities.

“I knew who Isabella Blow was, but I didn’t know much more. I remember seeing pictures of her and her avant-garde nature,” Schmidt said. But researching the part was difficult, in part because Blow didn’t talk about herself much. Further, the classic grad school advice failed as far as forming a character based on what other people say about her because the information conflicted.

She has support from the rest of the cast, notably multiple Carbonell winner and Mad Cat alumni Gregg Weiner who played opposite Schmidt in the acclaimed GableStage production, Fifty Words. Also on board is character actor Noah Levine (The Rover, Cat Lady and [title of show]) and Yevgenia Kats (AAPACT’s Dutchman and Miami Theater Center’s Three Sisters) who Tei said was a natural choice to play supermodel Dahl.

The production is a tweaking of what Mad Cat has done in recent years: This one is planned to be a bit more focused, with a smaller cast and one playwright, which allows Tei, who often has been a co-writer, the freedom to focus on directing.

In the end, Tei said, the play is about having “control when everything around you is out of control, how to take some control of your life.”

For Blow, this may have meant ending her life. Before ingesting the poison, she told a friend that she was going shopping.

“It was a desperate shopping excursion,” Tei said.