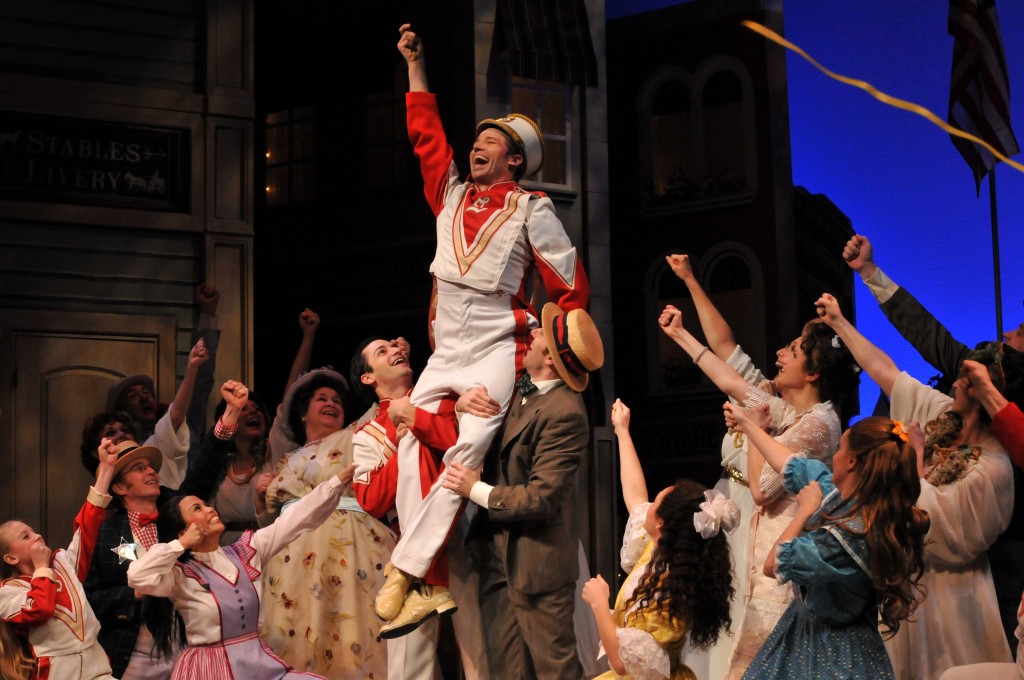 A con man has come to north Palm Beach County to steal your money. His name’s not Bernie Madoff; it’s Harold Hill.

Well, actually, it’s the effervescent triple-threat performer Matt Loehr wearing the braided band leader’s uniform as he leads the citizens of River City, Iowa, in a parade through the Maltz Jupiter Theatre auditorium like a Pied Piper in The Music Man opening this week.

The latter day song-and-dance man, who won over audiences in 2011’s Crazy For You and Cornelius Hackl in last season’s Hello Dolly, is headlining director Mark Martino’s vision of Meredith Willson’s iconic musical.

He’ll need that charm for two reasons. First, Hill really is a crook who sells instruments and future lessons for a boys’ band that he has no intention of sticking around to create. Second, because older audiences remember Robert Preston’s career-making performance on stage and younger audiences cannot forget his star turn in the film version.

But besides his unique personality, Loehr brings two well-developed skills that the charismatic Preston did not: He can sing the score well and, above all, he can dance – a dimension that Martino plans to use to distinguish this production.

Choreographer and Crazy for You alumnus Shea Sullivan has staged a lot more than the ice cream social cakewalk of  “Shipoopi.”  At the end of the first scene in which travelling salesmen sing in a railroad car, the script then has a static transition to Hill standing at the railroad station in River City. Martino has solved this by having Hill’s Loehr dance his way from one scene to the next.

“This tells people right away that we’re going to tell the story through dance,” Loehr said early in rehearsals.

Loehr, just as affable in person and looking a bit like John Ritter, sounded a hair surprised that he was doing the role in his early 30s.

“It was on my bucket list. After Crazy For You, Andrew (Kato, the Maltz’s producing artistic director) asked me what I’d like to do and I gave him a list of shows I wanted to so ‘someday.’ For years, I always thought I would be a very young Harold Hill; it was something I’d like to play when I was older. Well, now I’m older.”

Like Martino who doubts you can fight the iconic nature of the show and the original star, Loehr plans “to meld both the best of Preston and my own personality, fuse them. I always like to steal from the best. (Preston’s) phrasing on ‘Ya Got Trouble’ and ‘76 Trombones’ can’t escape my mind and it shouldn’t. But I bring in my own sense of humor and blend the charm and slickness. It’s Matt’s Harold Hill not Robert Preston’s.”

Some predecessors have failed to acknowledge that Hill is there to steal the Iowans’ savings, fearing they’ll lose the audience’s sympathy. The key, Loehr said, is Hill’s line when the boy Winthrop asks him if he’s a thief: “I always think there’s a band, kid.”

Loehr has worked on the challenge by assuming that Harold has conned himself as well with a raft of rationalizations. “He thinks, ‘They’ll find someone to lead the band’ when he’s gone. ‘They’ll just be mad at me for a little while’.” And he believes, accurately, that he has changed their lives. “They’re gonna be happier in the long run’.”

Martino, who directed Crazy For You, agreed. “He has a delight in the con.
There’s a huge charm in bad boys.”

This new vision of the role may be physically demanding, but the goal is to make it look easy as Loehr did for his Carbonell-winning lead in Crazy For You. But that  smooth grace involves a lot of work. While he is working a lot these days (he did another production of Dolly with co-star Gary Beach in Chicago), he works out every day when at home in Winston-Salem, North Carolina.

“Five years ago, I said if I’m going to do this (be a song-and-dance man), I’m going to have to keep up” the skill sets. He focuses on daily maintenance drills for his muscles and his voice. “I don’t want it to be a question when I reach up for a top note.”

Martino, a veteran of many revivals, is equally stoked to take on the show that he only directed once before for a high school production.

“There’s a reason it’s done so much. The show is so spectacular that it’s iconic. I don’t want to reinvent the show if it doesn’t need it,” said Martino who just finished helming Frank Loesser’s Guys and Dolls in Chicago. “I don’t think it’s a lack of ego, I don’t think this needs any deconstruction; the job is to present it in the best possible light.”

The catch is that the Maltz has a limited budget and audience members who saw the film have memories of much lusher images than the stage can provide. One answer is that Martino has hired almost no “chorus members.” Every principal player is in nearly every scene as a member of the town whether it’s the mayor or the barbershop quartet or the children in the band..

It took six years to develop a show this sturdy. Willson was a composer for early television programs who had not had much success in theater. He synthesized his experiences growing up in Iowa into the book, music and lyrics (allegedly with a little help from his mentor Loesser) and a lot of help from director Morton Da Costa, according to his memoir, But He Doesn’t Know The Territory.

The 1957 show was a smash hit, outscoring West Side Story at the Tony Awards in most categories. It made a stage star out of Preston, who had limited song and dance skills and was best known as the charming villain (often betraying his buddy the hero) in many 1940s and 1950s films.

Afterward, Willson tried in vain to equal the success of The Music Man, with The Unsinkable Molly Brown and Here’s Love (a musical based on Miracle On 34th Street), but he never caught the same lightning.

Martino thinks one of the secrets of its success is the underlying love story. Hill is redeemed by the love of Marian the Librarian. “Everyone in this show takes a journey and he takes the biggest one. It’s about two lonely people finding each other and finding their better selves. It’s very satisfying.”