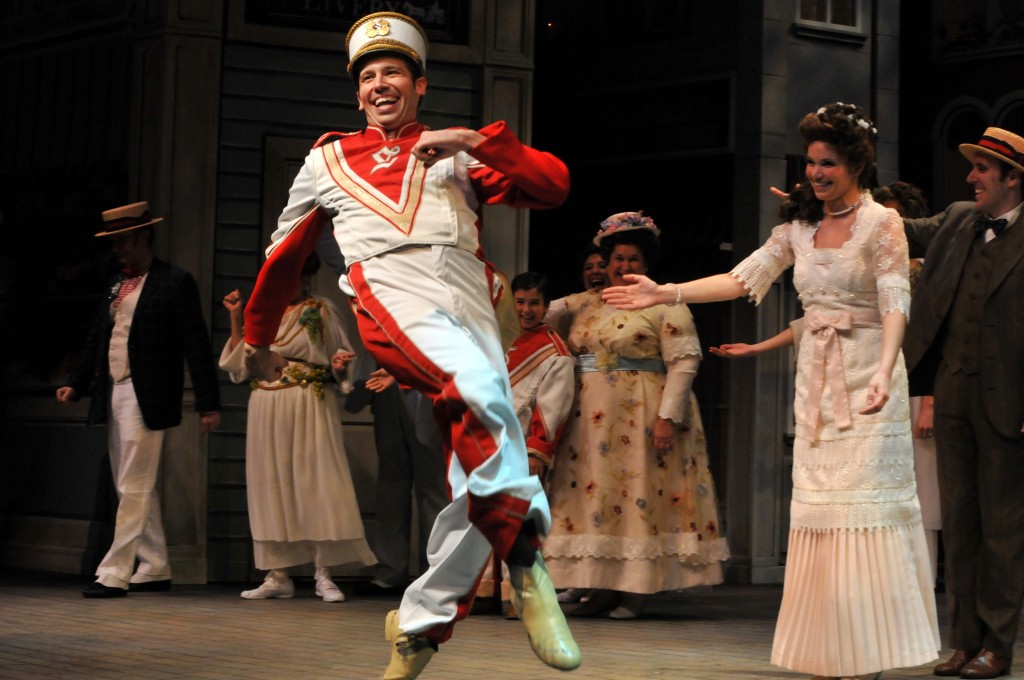 Know this, the Maltz Jupiter Theater’s production of The Music Man  is what the American musical theater used to be.

Joyful as a teenager skipping home after a first kiss, adult as a 20-year anniversary, funny as a firecracker lit under a lady’s petticoat, sharp as the brim on a summer boater, crisp as the crease in linen slacks, smooth as vanilla ice cream, as skillful as a surgeon but too smart to let it show, and being unafraid of the difference between sentiment and sentimentality.

But this snappy, polished edition of Meredith Willson’s masterpiece, incisively helmed by Mark Martino and choreographer Shea Sullivan, is not some retro throwback or musty museum piece. It is delivered as fresh and honest as if someone had written it last month rather than the 1950s, much as the Maltz did last season with Hello, Dolly!

And no review should go another paragraph without honoring Matt Loehr, the Carbonell-winning song-and-dance man from the Maltz’s Crazy for You last year. Exuding viral joy, Loehr not only inhabits the hornswaggling charmer of a con man Harold Hill whose heart gets caught in the door along with his foot, but he makes the part so indelibly his own that he banishes the memory of the iconic Robert Preston.

No one reveres Sondheim and his successors more than this critic, but many warhorses have gotten a bad rep over the decades because they, this one especially, have been so badly mauled by amateur theater groups, high school drama clubs and misguided revivals treating them like sanitized paper-thin Disneyfications. The Maltz rendition proves why Harold Hill is still selling snake oil a half-century later. This is the best of a dozen Music Mans we’ve seen since the never-to-be-equaled first production with Robert Preston that I saw when I was 8 years old.

Martino, Sullivan and an exemplary cast and creative team never photocopy the 1957 original nor the 1962 film, which would be suicidal. Instead, within the confines of the material, they strive to make it unique – first by injecting far more terpsichorean magic to take advantage of the leading man’s skill, and second, to dig deep into the heart of the piece in the second act. When Mandy Bruno’s Marian trills “Till There Was You,” she uncovers its emotional truth and makes its preposterous premise plausible: Marian knows Harold is a crook about to desert her, but she is profoundly grateful that he has opened her heart to her own capacity for love. And the light-footed and light-fingered Loehr is credibly impaled and transformed by her declaration – as surprised as anyone by his reaction.  Frankly, this moment rarely works in most productions, let alone scores as affectingly as it does here.

Loehr is simply wonder-filling. He is what Matthew Broderick wishes he was in Broadway’s Nice Work If You Can Get It. He has that embarrassed grin John Ritter used in Three’s Company and a dance style reminiscent of the loose limbed Ray Bolger in Where’s Charley. In our review of Crazy For You, we kept using the word joy when talking about Loehr. It’s not a self-conscious “Look at me, I’m a dancing virtuoso” feel; it’s an undeniable swell of bliss from someone who loves what he’s doing for its own sake. Loehr’s Harold also has more depth and maturity than the goofball playboy he portrayed in the Gershwin musical.

While Loehr is the driving engine, the show doesn’t stop when he leaves the stage. The rest of the cast, with a couple of “just average” exceptions, is nearly perfect. Native Iowan Willson was affectionately teasing his roots, so the cast under Martino has created archetypes, not stereotypes; they veer close but never keel over into cartoon land.

Bruno’s Marian may start off a bit tamped down (you wish for a little more longing in “Goodnight, My Someone”), but when she caresses her crystalline soprano around “My White Knight,” the denied passion – not just for love but for life — pours out of her.

Special mention is due the pitch-perfect interweaving harmonies of the ad hoc barbershop quartet of Paul Castree, Richard Costa, Don Rey and Joshua Woodie under the musical direction of Anne Shuttlesworth.

But they’re not alone. The cast of 30 including nine children is nearly note perfect, and, incredibly, every single solitary word of Willson’s witty lyrics were enunciated clearly, from the mass choral numbers to Hill’s patter songs.

Martino is such a skilled stager of classic musical theater that only professionals will spot how smoothly he moves people around, how he varies the pace but never lets it bog down, and how he loves grace notes that deepen the story without calling attention to themselves. For instance, during the all-out exultation of “Shipoopi,” Harold and Marian stop for no more than a few seconds as the townspeople barrel away at full polka. They are not taking a break as principal actors often do during dance numbers; their characters are savoring the sight of the energized community and enjoying their burgeoning feelings for each other.

Shea’s choreography with an assist from O’Bannion is a vibrant procession of struts, cakewalks, polkas, kicklines and a virtual catalog of Broadway production number steps executed with enthusiasm and precision much of the time. But you can tell she gloried in having Loehr as her alter ego. Loehr has a slightly loopy patina and Shea has given him several moves with his arms waving like a galumphing yet graceful whooping crane. He has a small nuclear power plant inside his body, so she never has him walk when he can scissor step, never step off a riser when he can leap into the air.

The production has myriad other strengths including Jose M. Rivera’s period costumes. He designed a dry goods store’s worth of outfits including ankle-length shirts, frou-frou hats with feathers, brooches, necklaces, bow ties, spats and vests. (Iowa must have had an unseasonably cool summer in 1912.) His choice of patterns and color palette are just slightly off kilter enough to tease the period but not seem like something yanked from a storybook. Marty Mets’ sound is textbook crisp and clean; Donald Edmund Thomas’ lighting deftly evokes time of day, prevailing emotions and pushes our attention to the central figure of a scene while keeping everyone else visible.

Paul Tate Depoo III’s set design of quintessential Americana escapes feeling like Disney World’s Main Street. By adding a backdrop or flying in a few pieces of scenery, the stage fluidly morphs from the town square to a wood-paneled library to a school gymnasium. He and Thomas create glowing sunsets and night skies behind a modest skyline and they depict warm houselights appearing behind the curtained windows.

Shuttlesworth’s  musical direction seemed flawless as she led her singers and musicians in a thrilling, crackling aural soundscape. Her band was spot on from the first rip of the snare drum to the final crashing chord of the brass section. No one has had a full orchestra in the pit in years other than Lincoln Center’s atypical South Pacific. But the nine pieces sounded as if she had twice that number with orchestrations that accented the tweeting piccolos, tinkling triangles and clashing cymbals of Willson’s youth playing for John Phillip Sousa.

South Florida should be grateful that the Maltz is increasingly putting its talent and resources toward plays like its season opener Amadeus and later this winter, Doubt.  But Hello, Dolly, Cabaret and now The Music Man are solidly in the Matlz’s wheelhouse. The citizenry of River City aren’t going to be the only ones being seduced and falling in love each night.
The Music Man plays Nov. 27-Dec. 16 at the Maltz Jupiter Theatre, 1001 E. Indiantown Road in Jupiter. 7:30 p.m. Tuesday-Friday,  8 p.m. Saturday,  2 p.m. Wednesday, Saturday and Sunday. Tickets are $46-$68, available by calling (561) 575-2223 or visit  jupitertheatre.org.

To read interviews with Loehr and Martino, click here.