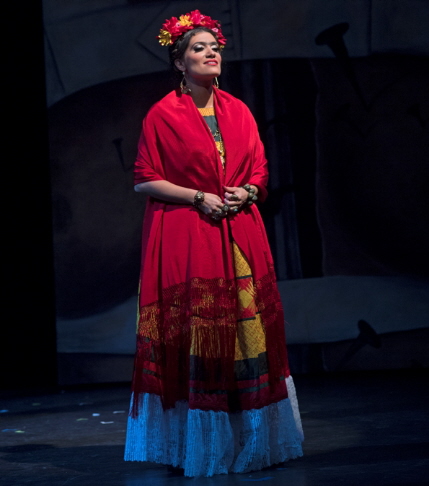 It’s not unusual for opera singers to have a special affinity for a particular character and a particular score, so that certain parts become “signature roles” for an artist throughout their career.

Until a few years ago, the Miami-based, Colombian-born soprano Catalina Cuervo was best known for holding the record for portraying Maria in Piazzolla’s Maria de Buenos Aires — more than 50 times including for the Florida Grand Opera.

But since 2015, she has been forging a similar bond with the iconic Mexican painter in Robert Xavier Rodriguez’s 1991 biographical piece Frida. She will get her third run at the part this month for Florida Grand Opera as it once again schedules a work among its usual classics that is little known by its regular patrons.

The work tracing Frida Kahlo’s life from adolescence to her death has so many musical influences and vibes that it exists in a grey area between opera and musical theater. It’s highly stylized staging and more intimate scope means it will be staged at smaller venues: the Miami-Dade County Auditorium, Miramar Cultural Center and Parker Playhouse in Fort Lauderdale.

“This is not your regular opera,” Cuervo said. “This is not the music from Puccini or Mozart. It’s very, very different — modern composition with a lot of Mexican sounds and Mexican instruments. In the orchestra you’ll hear an accordion. It will be a mixture of jazz and classical and contemporary” embracing mariachi-style orchestrations, tangos, echoes of zarzuela, ragtime, vaudeville and 1930s jazz. “And it’s all there to serve the moment and be driven by what’s happening in the scene,” she said.

Six women and five men performing multiple characters appear in a variety of guises, masked and bare-faced. The vision encompasses two- and three-dimensional puppets, as well as shadow puppets and projections.

The challenge of the piece is far from modest as Cuervo knows, having portrayed the fiery iconoclast at the Cincinnati Opera 2017 and Michigan Opera Theater 2015 whose physical production is duplicated here.

“Frida is an idol — an idol for the Mexican people and an idol for women in general. And for Mexican women, she is this national treasurer,” Cuervo said between rehearsals. “That’s a big responsibility. I feel a lot of weight on my shoulders being a Colombian that you need to do right by her for Mexican people.”

Kahlo, who died in 1954 at the age of 47, carved a unique path with her unique visual style that unabashedly reflected her country’s pop culture, fantasy mixed with realism and a folk art sensibility seen in scores of portraits, self-portraits and broader works reflecting the zeitgeist of her homeland. She was outspoken about politics and feminism seen through the lenses of affairs and marriages including to famed muralist Diego Rivera whom she lived with during part of his controversial stay in the United States.

The opera was conceived by librettist Hilary Blecher, with the English and Spanish lyrics and monologues by Migdalia Cruz.

Rodriguez’s demands on Cuervo are considerable, but she feels more comfortable on this third run at the work (She has two more productions slated in the coming two years).

“After a couple of years getting into my voice and the character and really settling in, I feel right now I can bring more to the table both vocally and artistically,” she said. “When it was first done, it very difficult.” Rodriguez told her, “Frida will sing like she lived her life, always against the beat. It’s still very difficult — not the notes, not the tessitura, but the rhythm and the entrances. (But now) I feel like I can stop counting so much and be in the moment.”

The hardest part for her is the music that is composed for someone with both a mezzo and soprano ranges, she said, “for a singer with the ability to sing in a chest voice, well, like musical theatre. It can go very, very low into ‘contraltoland’ and then arias all the way up in ‘sopranoland,’ and in one aria go from one to the other.”

But she is in love with the piece. “It has beautiful moments. One of my favorite musical moments is the bath scene, very sensual, but the music is absolutely gorgeous. She has divorced Diego and is discovering her sexuality apart from him.”

It helps that her Diego is baritone-bass Ricardo Herrera who has performed the role with her before. The director is New York Theatre Ballet’s Marco Pelle, also a Frida veteran, who will inject the more surrealistic scenes with his talent as a choreographer such as having dancers perform images in Kahlo’s mind as a wounded deer as Frida sits to the side painting them.

Cuervo is also a dancer, model and what her biography says is “one of the leading voices of Symphonic Rock/Metal Music in Colombia.” Although she travels the world, she has called Miami home since 2000. She received her bachelor’s degree in vocal music performance from the New World School of the Arts, then left to earn a master’s degree from the Chicago College of the Performing Arts in 2007 and then returned in 2014 to what she considers her hometown.

Frida plays March 16-30 with a different schedule of venues than usual: Miramar Cultural Center, 2400 Civic Center Place, March 16 at 7:30 p.m. and March 17 at 3 p.m.; Parker Playhouse, 707 NE 8th Street, Fort Lauderdale, March 28 and 30 at 7:30 p.m.; and Miami-Dade County Auditorium, 2901 West Flagler Street, on March 21 at 8 p.m., March 23 at 7 p.m. and March 24 at 3 p.m. Tickets are $35-$99. They can be purchased in person at the Florida Grand Opera Box Office at the Doral Center at 8390 NW 25th Street, online at www.FGO.org, by phone at 1.800.741.1010, or email at Sales@FGO.org. Tickets can also be purchased through the venue box offices onsite and online at the Miramar Cultural Center at www.MiramarCulturalCenter.org, Miami-Dade County Auditorium at www.MiamiDadeCountyAuditorium.org, Parker Playhouse at www.ParkerPlayhouse.com, and on www.Ticketmaster.com