Savor the Flavor of This ‘Tootsie’ Pop at the Broward Center

Sometimes, all we want is to just sit in a chair and be entertained by full-throated singers, appealing actors, solid dancing and a script that offers more than a few laughs. That sheer entertainment factor is on the boards—spanglely red dress and all—in the non-equity production of the musical Tootsie, running through Jan. 23 at the Broward Center for the Performing Arts in Fort Lauderdale.

The musical, with songs by composer-lyricist David Yazbek (The Band’s Visit), takes its cue from the terrific 1982 Sydney Pollack film starring Dustin Hoffman, about the arrogant, impossible-to-hire actor Michael Dorsey who disguises himself as a woman named Dorothy Michaels in order to finally get cast in a role. The basic premise is still the same—Dorothy/Michael gets the role, becomes popular and famous immediately, falls in love with this co-star who thinks he’s a woman and learns a lot about sexism, diplomacy and his own inadequacies.

The Broadway production garnered 10 Tony nominations with two wins for Best Book of a Musical (by Robert Horn) and Best Performance by a Leading Actor in a Musical to Santino Fontana, who is scheduled to perform at The Parker on Feb. 5 as part of the Seth Rudetsky Broadway Concert series. (For tickets visit https://www.parkerplayhouse.com/events/detail/santino-fontana-with-seth-rudetsky-2022)

While the musical keeps the basic conceit of the movie, a major change is that Dorothy/Michael gets the role in a Broadway musical rather than a soap opera set in a hospital. While a musical, of course, opens itself up to lots of reasons for singing and dancing, it seems a soap opera would provide even more fodder for a story line and songs that lampoon daytime drama.

The only connection to “health care” is that now the show is Juliet’s Curse, a sequel to Romeo and Juliet with Dorothy playing the nurse. In this version, Juliet lives, Romeo dies.

Juliet’s Curse looks like a stinker of a musical with gloriously bad songs and worse dialogue. That is until Dorothy is cast and begins to remake the show, winning the respect of the cast, the producer and, most of all, leading lady Julie Nichols. The show is renamed Juliet’s Nurse.

Drew Becker is an appealing actor with an equally appealing voice. His transition from the full-of-himself Michael Dorsey to the calm, assertive, take no disrespect from condescending directors Dorothy Michaels works. He nails his solos of “Unstoppable” and “I Won’t Let You Down.” His illusion as Dorothy is credible.

As Julie, Ashley Alexander displays her mettle as a woman devoted to her craft, willing to make the sacrifices she believes are necessary to be a successful actor. Alexander and Becker have a solid chemistry that makes their pairing believable.

But two actors are scene stealers—Jared David Michael Grant as Jeff Slater, Michael’s roommate, and Payton Reilly as Sandy Lester, Michael’s ex-girlfriend and acting student. The rubber-faced Grant conveys his deep affection for his long-time friend and his disgust at Michael’s scheme in every scene he is in. His song “Jeff Sums It Up” is hilarious. The manic, often hysterical Reilly conveys so much energy on stage, demanding the others keep up with her, as in “What’s Gonna Happen.”

Also notable are the hilarious Lukas James Miller as the can’t-act-his-way-out-of-a-paper-bag reality star Max Van Horn; Steve Brustien as Michael’s weary agent Stan Fields; and Kathy Halenda as the stalwart producer Rita Marshall, who, no doubt, has put up with more enough sexism during her career. Adam Du Plessis is a bit too over the top as the misogynistic director Ron Carlisle, though his attempts to illustrate dance numbers is quite funny.

Kudos to Christine Peters for her tour scenic design based on David Rockwell’s original design for Broadway; William Ivy Long for costumes and Christopher Vergara for costume coordinator; Brian Ronan for sound design and Donald Holder for lighting design.

And a special note to the ensemble who kept Tootsie moving and hard-working conductor Andrew David Sotomayor and his equally hard-working band.

We’re glad to have live theater back and maybe Tootsie is just the balm we needed.

COVID Protocol at Broward Center: All guests age 2 and over are required to wear a suitable face covering while inside the theater. All guests age 12 and over are asked to provide documentation of a recent negative COVID-19 test OR, fully vaccinated guests provided the option of providing documentation of full vaccination status; matching photo ID will be required for adults 18 and over.
Visit the Guest Policy at https://www.browardcenter.org/visit/guest-entry-policy forfull details. 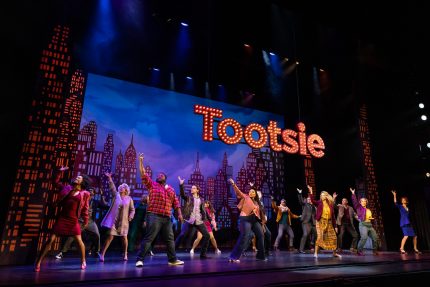 This entry was posted in General and tagged Tootsie. Bookmark the permalink.