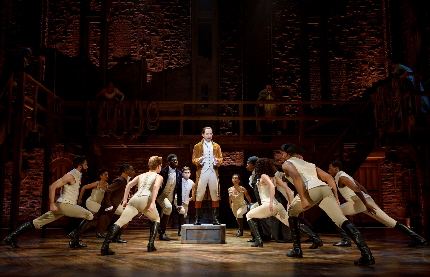 An Assorted Cornucopia For The Room Where It Happens

The ground-breaking record-breaking Tony-winning Grammy-winning Pulitzer-winning musical Hamilton is expected to attract unprecedented numbers of fans and newcomers from across South Florida when the second of three simultaneous national tours arrives at the Broward Center for the Performing Arts this month.

But that raises a dozen logistical challenges, starting with where will as many as 2,600 people attending each show at the main Au-Rene theater find places to park, and how will officials handle potential traffic jams?

But there are many other questions. For instance, can people still get tickets? If not, is the show touring anywhere else in Florida?

Several entities have been working for months, in some cases even longer, to anticipate and find solutions for the challenges. The Broward Center and the City of Fort Lauderdale, from the mayor’s office to the police department, have been conferring with the staff of the sponsoring Broadway Across America. They have spoken with and visited other venues where the show has been playing.

The scope of the hosting effort is massive and will have to last from December 18 to January 20 – a longer than usual visit. But the Broward Center staff came into the process with some confidence because of past experience, said Kelley Shanley, Broward Center president and CEO.

“We’ve had every major blockbuster show to debut here. Phantom of the Opera, Lion King, The Book of Mormon, Wicked, they all came here first for long extended sold out runs, so we know what to do. But we always try to think for ourselves around where things may have changed and always are looking for ways to improve,” Shanley said.

Still, Hamilton is special in that it has driven up the number of season subscribers, although both the Broward Center and Broadway Across America balked at revealing the kind of figures released every week for every show currently playing on Broadway.

Shanley’s key piece of advice to audience members to make the experience smoother: Come early. Not 15 minutes early, not even a half-hour early, but considerably early to find parking. Patience in this and every other aspect will be rewarded.

The parking garage just north of the center – owned and operated by the city and center – has about 900 spaces. A serious problem used to exist because the credit card billing process for parking was slow because of wireless problems. But the processing time of about 60 seconds per car has been reduced to as little as five seconds, Shanley said. The resulting traffic problem appears to have evaporated for the well-attended The King and I tour, he said.

The center is leasing other parking to accommodate staff who normally park in the garage.

Some spaces have already been pre-sold as a season subscription package options. Extra valet staff will be added. Signage and live guides at the bottom of the entry hill will answers questions and direct arrivals.

Patrons might find it prudent to scout alternative lots a few days earlier. Other parking lots exist within two blocks of the center and the county Government Center is as located a little further away across the railroad tracks.

Shuttle service is being evaluated from City Hall and the new Brightline railroad station.

Police, security teams and city officials are talking about traffic flow, said Dayana Diaz of the city’s Strategic Communications office. The Florida Department of Transportation will manage the signals on Broward Boulevard between I-95 and the Broward Center. City officials will be able to control the signals in the surrounding area to improve the flow of traffic. Fort Lauderdale police will be present to prevent or at least unsnarl jams.

This is especially crucial on matinee Wednesdays when the exodus will coincide with the beginning of rush hour. For instance, taxis and rideshare services like Uber and Lyft will only be able to drop off and pickup at a dedicated spot near Esplanade Park down the hill and to the east of the center, specifically SW 4th Avenue south of Himmarshee Street. Officials hope that private cars dropping off and picking up people will use the same location to reduce double-parking and hold-ups in the traffic flow.

If patrons come early, the Broward Center is hoping they will come hungry. Besides the restaurants lining Himmarshee, the center’s offerings begin with its Marti’s New River Bistro, although many evenings are already booked up, leaving walk-up customers to eat outside. A carved turkey station will sell food in the main lobby. The center has always had high-end eateries at the Club Level and the Intermezzo Lounge. But the center is adding a high-end buffet kind of dining just during the Hamilton run at its Abdo New River Room, plus adding a pizza stall in the courtyard.

There are complicating factors: For instance, shows will still be scheduled in the adjacent Amaturo Theater with 582 seats, notably Slow Burn Theatre Company’s Legally Blonde, which will overlap for about two weekends.

Some problems are familiar but are expected to ratchet up at Hamilton. For instance, cellphone use is still banned (not to mention distracting for neighboring audience members and the actors). Deft, diplomatic efforts to curb the instincts of audience more accustomed to rock concerts will be in place.

The run is scheduled to play 8 p.m. Tuesdays-Saturdays, 2 p.m. most Saturdays and some Wednesdays, 1 and 7 p.m. Sundays with no performances Christmas Eve, Christmas Day or New Year’s Eve.

The production will play 39 performances; if it sells out every performance, it might create a record-breaking 100,000-plus attendance.

As of early December, an undisclosed number of tickets were still available through responsible vetted channels such as Ticketmaster. But not a lot. Ticketmaster’s website shows those tickets are selling from between $78 to $950.
Tickets for the just closed The King and I were going for $40 to $80 and for next spring’s Fiddler on the Roof  for $35 to $95. Broadway seats available for the coming week were selling for $304 to $984 for a Thursday, and for the following Saturday, $565 to $ 2,043.

There is no official waiting list for unsold tickets.

The Broward Center has not received any formal reports, but its officials have little doubt that there are scalpers out there, as well as brokers who have tried to circumvent the four-ticket maximum rule. And there are always the out and out scammers such as those who scan the bar codes on photos of tickets that people have posted in social media – and then counterfeit a ticket for resale.

If you can’t get a ticket locally, the show plays Jan.22 to Feb. 10 at the Dr. Phillips Center in Orlando and Feb. 12 to March 6 at the Straz Center in Tampa.

—Again, come early. The earlier the better. It will not only increase the likelihood of parking in the adjacent garage, but it allows time in case you have to park a block or blocks away. Keep in mind: Most shows will not seat you after the show starts until after the opening number is completed.
—Do a little homework: The musical cannonballs at a blinding speed through major developments in Hamilton’s life, the politics of creating the country and the rocky decades following the Revolution. It will help your appreciation to do a few minutes of online research of the period and the players.
—Listen to the score ahead of time: The lyrics are nothing short of brilliant, but it’s mostly performed as rap music. Therefore, the words will be all the more appreciated if you have listened to the original cast album two or three times. Some copies of it are available through the Broward County library system (but demand has been, is and will be high).
—Have patience leaving the show: Traffic problems will be just as daunting after the show as before it. At a running time of 2 hours and 45 minutes (including one intermission) matinees will get out just as rush hour is starting.
—Cellphones: Taking photos during the show is strictly prohibited. Period. That stops no one from equally forbidden photographing the set before the show starts or selfies with their programs. But during the show, you might find your cellphone confiscated until after the show ends. Texting your mother and taking a call from your brother-in-law is incredibly rude and disturbing to those around you because of the lights and sound (the actors can see you in the reflected light, by the way). And putting a phone on vibrate is useless, because if there is an Amber Alert or Weather Alert, the warning alarm goes off even if you have the sound turned off.

For the detail-oriented, trivia provided by the production

•         There are about 25 crew members backstage who run Hamilton, plus all the managers and other people that help make the show happen, totaling more than 100.
•         There are 513 lighting instruments
•         There are 1,098 light clues
•         Hamilton’s sound team is utilizing state of the art technology. Some speakers can change where sound is physically directed using electronic waves, while others are the first of their kind to be used in production.
•         Over 1,000 man days went into engineering, building, painting and automating the Hamilton set.
•         Almost all the brick and wood on the set is fake. The brick is mostly made of homasote and vacuform, while the wood is mostly engineered sheet goods that has been textured and painted.
•         Hamilton’s show deck is only 9” tall, but within it are housed all the motors, encoders, drivers and other mechanisms needed to make the turntable work.
•         There are over 50 different types of paper props in the show.
•         There are over 20 hidden prop boxes around the set.
•         Larger props/tables/candle carts fly up and out of the way in the wings
•         Fabric for the costumes are made specifically for the show in France and England: The Ensemble Military wools are hand woven and dyed in England.
•         The camel colors are referred to as HAMIL-TAN also referred to as “The Parchments”

This entry was posted in General and tagged Broward Center for the Performing Arts, Hamilton, Kelley Shanley. Bookmark the permalink.