Time is not always kind to continuing enterprises like The Naked Stage’s annual fundraiser The 24-Hour Theatre Project. But the seventh edition on Monday proved once again to be stronger and more consistent than each previous year while preserving its ambiance of camaraderie amid the chaos.

Coming hard upon the holiday, silly spookiness complete with ghosts, voodoo spirits, aliens and a Hitchcockian murder plot were featured in the eight short playlets created from nothing but a whimsical title 24 hours earlier.

This year’s entries were generally better constructed, often had a plot and character arc, and for the first time, other than one joke, the actors all had their lines memorized – well, at least no one was carrying a script. As always, a couple of playlets were rougher than others, but a few ought to have a future life, perhaps in City Shorts programs. Regardless, the actors and director threw themselves completely into selling the madness.

Such critical assessments are completely beside the point.  It was all, to succumb to the inevitable, a hoot.

As always, the highlight of the evening was its final moments as the 70 or so participants and volunteers swarmed onto the stage to hug each other and acknowledge the audience’s ovation. The South Florida theater world has its share of rivalries, grudges and jealousies, but such moments indisputably prove it also harbors an even greater measure of unstinting support, unshakeable friendships and a sense of community that trumps any schadenfreude.

The event was created by Naked Stage co-founders Antonio Amadeo, John Manzelli and the real workhorse of the project, Katherine Amadeo. Virtually everything is donated from the manpower to the space by Dramaworks to the after-party from the South Florida Theatre League. The proceeds are earmarked for Naked Stage’s long-awaited production of Strindberg’s Miss Julie in June. The company is known for powerful and inventive productions performed at the Pelican Theatre at Barry University in Miami Shores, acclaimed works like The Turn of the Screw and 4:48 Psychosis. But it basically has to raise money before it can mount a production, the theatrical version of living hand to mouth. 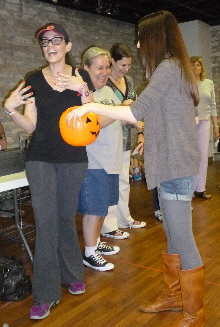 Katherine Amadeo offers a bowl of names of actors to playwright Deborah Sherman as Tony Finstrom looks on.

Some of the 60-plus playwrights, directors, actors, stage managers, tech folks and interns gathered at 7 p.m. Sunday at Palm Beach Dramaworks’ rehearsal hall to pull names out of a black plastic jack-o-lantern like picking sides in a schoolyard baseball game. A few people weren’t present because they were driving up from matinees in Broward and Dade or performing in Dramawork’s Sunday mounting of the drama Of Mice and Men downstairs.

Then the groups chose a title from nonsensical phrases thought up by the project’s Amadeo. The playwrights secreted themselves around the theater complex all night writing scripts. For a few, it came easily like for Michael McKeever who said he got a nap for the first time in the seven years. Others watched hairs turn grey as they paced, drank coffee or hunched over their laptops at 4 a.m.  A few made reference to the fact that the show was performed on Michael Amico’s set for Of Mice and Men, a rude, weather-worn barn. For instance, one character said, “I didn’t expect to spend my honeymoon at the Steinbeck Lodge.”

At 7 a.m., the artists reconvened to begin blocking while some playwrights continued to fine-tune their scripts – or sleep. Some playwrights noted that their visions came together exactly as they imagined or even better due to the contributions of the director and cast. Others noted quietly that what made it to the stage only sort of resembled what they had written.

The Curse of Willoughby (Writer: Tony Finstrom / Director: Michael Leeds / Stage Manager: Jovon Jacobs) Karen Stephens played the head of a financially-imperiled women’s college still haunted by a mass murder on campus, as her secretary Niki Fridh reminded her. But succor appeared in the guise of Texas billionaire Shane Tanner (alongside the acerbic wisecracking ghost of murder victim Tracey Barrow-Schoenblatt). Tanner was willing to donate generously if they would admit him to finish his degree – and start a football team for him to quarterback. Of course, he had a secret that explains a great deal.

The Legend of Hitchhiker Jones (Writer: Andie Arthur / Director: Kim Ehly)
Margery Lowe and friends Matt Stabile and Nanique Gheridian took a nocturnal road trip seeking a spirit who figured in a highly romantic legend. When he appeared in the form of Clive Cholerton, Lowe’s hoped-for romance didn’t quite go as expected. Cholerton discovered that the skeptical Gheridian was the reincarnation of his long-lost love.

Area 54 (Writer: Jessica Farr / Director: David Hemphill) Adam Simpson as (we think) David Bowie, Wayne LeGette as (we think) Lou Reed and Clay Cartland as (we think) Mick Jagger are drinking at Studio 54 being served by roller-skating waitress Mia Matthews. In reality, they are aliens who fell to Earth (didn’t you always suspect that) and are deciding whether to destroy the planet.

Till Beth Do We Part (Writer: Christopher Demos-Brown / Director: Andy Rogow) Gregg Weiner revealed why he had yet to propose to Irene Adjan at her 40th birthday party: He believed he was fated to spend life with someone named Beth after finding a missive in a bottle from a “Beth” on a trip to Ireland. As Adjan tried to cope, Weiner’s wisecracking sister Meredith Bartmon made it all the more difficult, along with interruptions from his mother, Beverly Blanchette.

Smile as the Hearse Goes By (Writer: Paul Tei / Director: Kim St. Leon)
If you thought Area 54 was strange, this one was a weirder mélange of surreal, spooky and silly in a Twilight Zone-ish episode. Nick Duckart and Natalia Coego were stranded in the bayous outside New Orleans on their honeymoon night, bedeviled by a collection of creatures including Amy McKenna as the hearse driver who gives them a lift and Lela Elam as a voodoo queen. A particularly funny moment came as Elam appeared a spooky flower seller carrying a armful of blooms, saying “flores para los muertos,” a reference to A Streetcar Named Desire.

The Ritual (Writer: Marj O’Neill-Butler / Director: Adalberto Acevedo)
Patti Gardner was a young wife to George Schiavone. She wanted to fly to her sister’s annual Halloween party. But Schiavone hated all of his temporary healthcare givers and his son Noah Levine didn’t want to babysit. She brought in what she claimed was the current caregiver, Alex Alvarez. But Alvarez was just a pal of Levine’s. To tease the curmudgeon, the three audibly plotted his murder as a joke. But it gives Gardner ideas.

Unearthed (Writer: Deborah Sherman / Director: Leland Patton) It takes a little while to figure out exactly what is going on here, but once you do, it pays off as an unusually moving and impressively performed entry. Two unrelated couples on either side of the stage (who we later realize are brother-and-sister duos) are sitting at the bedsides of their fatally ill mothers. Often speaking the same words at the same time, then finishing each other’s sentences, the two couples are shown in the universal experience of dealing with the death of a loved one. Intricately constructed and precisely directed, the script would be tough to pull off with days and days of rehearsal, but Laura Hodos, David Meldman, Sally Bondi and Barry Tarallo nailed it with eight hours’ work.

The Seven Deaths of Rhona Banks (Writer: Michael McKeever / Director: Desmond Gallant) Son Cliff Burgess railed against father Dave Corey for letting his very young girlfriend Abby Perkins host the family Halloween party that was a tradition started by Corey’s late wife, although his other son Pierre Tannous was less concerned. Burgess kept listing the transgressions that would have killed his mother if she had known, leading to a funny swapping of other behaviors by everyone on stage that would have killed the mother. But like an episode of Modern Family, everyone came together in the end, brought together by the wisdom of Perkins.