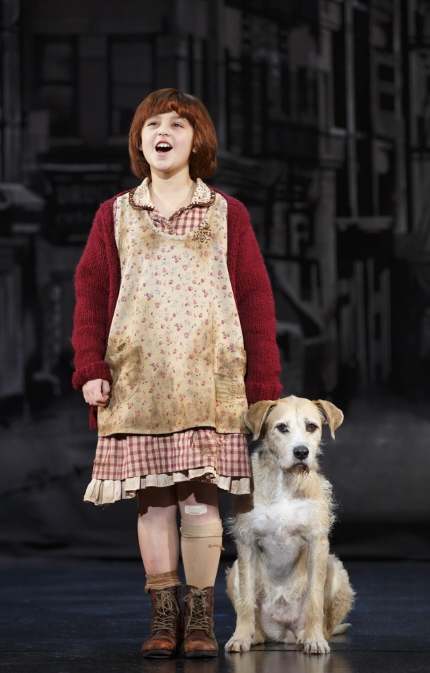 Why should you go to see Annie yet once again, besides delighting your children and the fact that this edition of a new-from-scratch national tour at the Broward Center is one of best Annie productions we’ve seen? Two reasons.

The first is that Martin Charnin, directing it literally for the 19th time since he helmed it in 1976, has banished a lot of the saccharine overkill and played the remaining cuteness and heart-tugging moments against a grimy, downtrodden Depression that resonates a good deal with our current world.

It’s not that this is a dark revisionist Annie; there’s still an adorable gang of orphaned moppets, a scruffy dog and genuinely moving moments such as the irresistible and iconic song “Tomorrow.”

It’s that Charnin has underscored bookwriter Thomas Meehan’s vision that Annie’s optimism triumphs over a world so spiritually damaged by widespread poverty and the resulting venality that imminent war is a tertiary concern.

So when a resurrected hope surfaces and good prevails, it’s a resilient optimism whose bona fides as a legitimate philosophy have been earned, tested by harsh realities of “a hard knock life.” You can hear the anger underneath the dispossessed’s witty sarcasm in “We’d Like To Thank You, Herbert Hoover.” And that, folks, is why hard-hearted cynics found their throats closing up and their eyes moistening several times on opening night. Not to mention one of the most endearing Broadway scores of all time.

The ultimate test is in the scene in which Annie energizes Roosevelt’s demoralized cabinet with her reprise of “Tomorrow.” The litany of worries facing them – economic, political, social, and even the threat of Hitler — are painfully familiar to many in the audience. So when the cast enthusiastically belts out their hymn to hope, it is greeted with an ovation from an audience thirsting for a glint of dawn.

The second reason to see this Annie is Annie. Savor the national bow of Davie resident Issie Swickle as she nails the title role with the polish and chops of someone a lot older than her nine years

Now here’s a surprise: She can belt out a song with best of them and she has performer’s pizzazz without self-consciously mugging for applause. But Swickle’s not some blinding strobe light pulling focus from everyone else like such forces of nature as the original Annie, Andrea McArdle. She’s not a dynamo (although she reportedly has that quality), she’s not a mini-Merman (although she reportedly has that ability). She actually acts the part, not performs it – which is probably why Charnin chose her over about 500 other applicants. It’s especially evident in the non-belt numbers such as the wistful opener “Maybe.”

Swickle inhabits a street savvy, scrappy survivor who has spent her entire childhood in a soul-crushing orphanage in the depth of the Depression. So when she sings out loud and strong about the sun coming out tomorrow, this Annie knows whereof she speaks.

Yes, she’s adorable, winsome and charming, but neither she nor the show is a two-dimensional cartoon character. When she makes her second act entrance in the red ringlets and jumper, high-kicking down a curving stairway in the Warbucks mansion, the beams emanating from her face seem genuine even as they are pure Broadway fantasy. To paraphrase the old pop standard, you’re gonna hear from her.

But she has first-rate support from a no excuses cast top-to-bottom, starting with Lynn Andrews as greedhead Miss Hannigan and Gilgamesh Taggett as Warbucks (Gilgamesh, wasn’t that one of the monsters in Ghostbusters?)

Taggett, who has played the role twice before, persuasively creates the gruff, emotionally shut off billionaire who learns what he has been missing. Not just tall and broad shouldered, but a bullet head on bull’s body, Taggett has a strong voice, of course. But he clearly charts Warbucks’ growth. Try to resist when Warbucks has committed his heart and yet must deny his own happiness to ensure Annie’s when she says all she wants is to find her parents.

Andrews, bless her, does not spend a moment trying to win the audience’s favor by winkingly playing the role as a lovable comedienne like when Carol Burnett did it in John Huston’s misbegotten film version. Her Miss Hannigan is still a blowsy alcoholic abusive monster, but the villainess’ hapless and luckless pursuit of riches somehow seems almost pitiful in its doomed ineptness. Almost.

Stocky with a wide eyes and pug nose, Andrews also has a fine singing voice that drips toxic discontent. She snarls a terrific guttural growl with menacing accusations like, “Did I hear happiness in here?”

Credit to Ashley Elder as secretary Grace who holds her own in a part that usually fades into the background. Garrett Deagon and Lucy Werner are delightfully venal and rubber-legged as Rooster and Lily St. Regis (named after the hotel she brags, which prompts to Hannigan to ask, which floor).

A shout out to the chipper FDR played by Allan Baker who has appeared at Actors Playhouse in both Mid-Life Crisis shows and Becky’s New Car.

Of course, the moppets are simultaneously appealing and might pick your pocket if you gave them a chance: Adia Dant, Isabel Wallach, Lillybea Ireland, Sydney Shuck, the impossibly cute Lilly Mae Stewart as Molly, and Miamian Angelina Carballo.

In a bit of bravura method acting, we have to credit Sunny who plumbs previously unknown dramatic depths in the character of Sandy, although his/her choices tend more toward the stoic than the histrionic.

But the show is the real star: Meehan’s perfectly constructed book, Charnin’s witty lyrics and Charles Strouse’s infectious score. And this crew under Charnin’s direction lands number after number with a polish and perfection that makes you shake your head. There is not a single weak moment in the production.

A highlight is the anthem “NYC” which is as thrilling here as we’ve ever heard it. Taggett’s unabashed love for the Big Apple is infectious, and Hannah Slabaugh’s solo as Star To Be captures the enthusiasm and fear that still marks a newcomer to the city.

Don’t misunderstand. This is still a musical comedy based on a comic strip, but Charnin ensures that it rarely feels like a cartoon.

This tour is produced by Troika Entertainment, which was once known for non-Equity shows of varying quality. But their product has become pretty reliable in recent years and this one is a worthy accomplishment.

To begin with, they have not stinted on the creative team or their output. Liza Gennaro’s choreography is winning, especially the strutting celebration of greed, “Easy Street.” Suzy Benzinger has designed stained care-worn clothing for the 99 percenters, stylish attire for Grace and crisp stylish uniforms for Warbucks’ staff.

Best of all is Beowulf Boritt’s set designs perfectly lit by veteran Tony-winner Ken Billington to create the grimy, downtrodden orphanage and the grim Hooverville, which contrast perfectly with the fairy tale opulence of Warbucks’ mansion. Boritt, who is becoming the dean of the next generation of designers, is especially skilled at whipping up seemingly three-dimensional backdrops of a black-and-white New York City from St. Patrick’s Cathedral to the Brooklyn Bridge looming over the Hooverville camps.

Charnin has lived with this piece in one form or another for 38 years and his experience with it ensures a smoothly running, fine-grained production with scores of directorial touches. He knows what works and what doesn’t. The tone is unafraid of warmth and sentiment without being cloyingly sentimental.

Side note: In an interview earlier that day, Charnin acknowledged that a new movie version of Annie is coming out for Christmas, which is “renting” six or seven of the 15 songs, jettisoning Meehan’s entire script and setting it in 2014 Manhattan in which political candidate Will Stacks (played by Jamie Foxx) rescues Annie (Quvenzhané Wallis) from being hit by a van. He won’t dis the undertaking but he puts his finger on its limitations when he said, “Their Annie is for today. Our Annie is for always.”

Annie runs through Oct. 19 at the Broward Center for the Performing Arts as part of the Broadway Across America-Fort Lauderdale series, 201 SW Fifth Ave., Fort Lauderdale. Runs 2 ½ hours including one intermission. For more information, call 954-462-0222 or visit BrowardCenter.org.

To read an interview with Issie Swickle, click here. 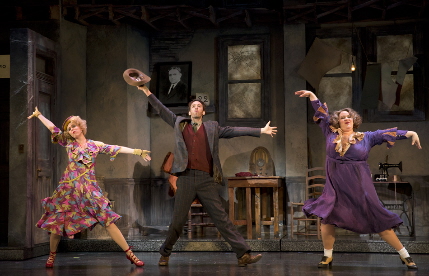