Posted on December 3, 2016 by Bill Hirschman 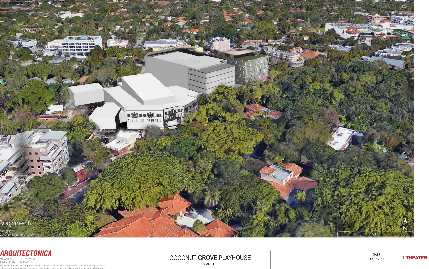 A specific plan finally has been unveiled by county officials and consultants for a new 300-seat theater on the site of the legendary Coconut Grove Playhouse – a plan that preserves some of the 1926 structure that has been deteriorating since it shuttered ten years ago.

The plans were posted early Friday evening on the website of the Miami-Dade County Cultural Affairs Division in preparation for a town hall slated for Thursday at Ransom Everglades School a few blocks from the theater.

Although the “master plan” is only one further step on what has already been a lengthy and contentious process, the floor plans and artists’ renderings may provide a concrete manifestation that some observers have been waiting for to signal that the project will actually come to pass, said people working on the project.

The vision for a modest but national-class regional theater, which will be tweaked during the design process, will not satisfy some critics who want the entire venerable structure resurrected as a historical landmark nor the forces campaigning for an 800-seat venue on the site.

But key elements of the plan are expected to go forward:

—renovating the façade of the existing structure and the “front building” facing the street, which would house offices and possibly retail outlets

—building a small courtyard behind it

—the city of Miami would build an adjacent 500-slot parking garage to be used by the theater, FIU, local businesses and nearby public schools; the structure might also house residential apartments and retail stores.

GableStage’s Producing Artistic Director Joseph Adler said Thursday, “The plan is absolutely great in every level and preserves what it is important in the Coconut Grove Playhouse.”

These plans and the extensive studies evaluating the current building’s structural integrity will be reviewed at length at the town hall meeting held from 6 p.m. to 8:30 p.m. Thursday, Dec. 8, at the auditorium of Ransom Everglades School, 3575 Main Highway in Coconut Grove. Parking is available on a first-come, first served basis. While the room has space for about 600 people, the county requests an RSVP from attendees for planning purposes by registering at http://www.miamidadearts.org/content/town-meeting-coconut-grove-playhouse.

The documents are on the county’s website at http://www.miamidadearts.org/coconut-grove-playhouse.

While further public input will be sought in future town hall meetings, the main thrust of the project is now set and architects will begin designing construction plans, said Michael Spring, senior advisor to the mayor and director of the Department of Cultural Affairs.

The meeting marks the first time the project has surfaced publically in the 19 months since the Miami-Dade County Commission voted unanimously in April 2015 to approve a $2.398 million master plan-design-consultant contract with Miami-based Arquitectonica International Corp., and a 25-year agreement with GableStage to manage the theater with options stretching out to 2113. FIU’s theater department is a full third partner in the projected operation of the site.

County officials, notably Spring, worked to save the nationally-recognized theater facility long before the Playhouse’s non-profit board of directors locked the doors in 2006 in a $4 million bankruptcy after 50 years of operation that brought national attention to South Florida’s cultural scene.

Since the closure, the county commission, urged by Mayor Carlos Gimenez and Commissioner Xavier Suarez, endorsed $20 million from two dedicated bond funds approved by voters. But commissioners pointedly and repeatedly emphasized that they would not spend one additional dime – an edict that has shaped numerous decisions. The plans being unveiled this month were ready earlier this fall, but officials wanted to wait until after the mayoral election before making the proposal public, said a source knowledgeable about the project

The current plan is to finish the design work in 12 to 18 months, then have the county commission solicit bids and hire a contractor, and then the public should expect a two-year construction schedule – assuming all goes perfectly, Spring said. Major construction projects in Miami-Dade are infamous for getting sidetracked, delayed or running over costs.

As promised by the county, rough plans are included in the current packet of documents for a second 700-seat theater on the site, Spring said. But they are not as developed or detailed as the primary plans. Some citizens, especially a group led by arts philanthropist and activist Mike Eidson, were pushing for a more expansive project, suggesting that a fund-raising campaign could fulfill the potential need for another $45 million.

But that option was crippled from the start. The land is actually owned by the state Department of Environmental Protection, which manages the state’s surplus land. It has given a long-term lease jointly to the county and FIU. That lease specifically cites a 300-seat theater and a proposed self-sustaining operating budget for the modest facility, Spring said. The county commission has no intention of providing the project with a formal line item in its ongoing budgets for operating expenses as it does with the Arsht Center for the Performing Arts.

One indication of the financial concerns is that a contingency fund must be cut out of the $20 million for cost overruns, and the proposed preservation also limits how much can be spent on the new building. Initial blue sky brainstorming plans among the players that had no limits have been scaled back, Adler said.

But the county has already applied and been recommended for a $500,000 grant from the Florida Division of Historical Resources, Spring said. The funding is pending allocations by the 2017 Florida Legislature and Governor. The site will be designed so that other upgrades can be added in the future as more funding becomes available, he added.

Another group of citizens, who have been outspoken on Facebook, have pressured for a plan that fully preserves the entire existing structure. The building is formally recognized as a “historic site” by the City of Miami. The three-story edifice was designed as a silent movie house in 1926 in the Spanish Baroque “Mediterranean Revival” style by Kiehnel and Elliott Architects, and reworked slightly when a hurricane damaged it soon after. Unlike many movie palaces of the era such as the Fox Theater in Atlanta, the interior was not unusually ornate.

Among the reports released Friday are detailed analyses of the building’s structural integrity. Generally, they indicate that even if the building was in good condition, the structure would not meet current building codes required to allow anyone to occupy it. But the reports unreeled pages of specific citations of rotting roofs and cracked concrete eroded by seawater used to mix the concoction — all of which would require more money than is available through the bond issues. That confirmed what former employees and others who have been inside had said: The facility was literally falling apart even before growing financial problems caused the theater’s non-profit board of directors to shutter the structure.

The county contends that little of the original design being lauded by preservationists still exists. The county hired architectural history expert Jorge Hernandez to study extensive records of the building as well as conduct on-site inspections. He confirmed previous reports that the building had been renovated and altered repeatedly since its construction, most notably in 1955 when the auditorium area was overhauled to accommodate stage productions, even including a balcony. The lobby and other areas were also altered. Another study took samples of paint from many of the walls in the building. Though a microscope, investigators found layer after layer of different colored paint going back to a golden hue from the building’s earliest days, Adler said.  Even the façade was changed, as documented in photographs from 1926 and 1971.

Adler and GableStage’s board members have been discussing for months what they will need to do to prepare. The current board of 12 members will need to be enlarged with new members contributing their own fiscal resources and their fundraising abilities that will make the larger more expensive operation feasible, Adler said.

Another issue is the financial facet. The company operating out of the Biltmore Hotel in Coral Gables has a budget of about $1.1 million. The early estimates of operating a theater at the Playhouse are about $2.6 million.  The county’s plan is include some revenue from the parking garage subsidizing the theater operations, Spring said. Further, GableStage, which currently gets an annual grant from the county, would likely get a larger amount because it would be upgraded for a medium-sized institution to a major cultural institution like the Miami City Ballet and Florida Grand Opera, Adler said.

All of the players, who have been meeting by phone almost weekly on Wednesdays for the past year and a half, will continue during design and construction to build GableStage’s needed internal infrastructure from budgetary issues to providing a leadership succession plan.

The Coconut Grove Playhouse on the corner at 3500 Main Highway has played a major role in Florida cultural history. In the 1950s, it began a history as one of the nation’s leading regional theaters that emerged after World War II.

In its heyday, producers like Zev Buffman, Robert Kantor, Jose Ferrer and, after 1985, Arnold Mittelman mounted their own shows, hosted national tours and even provided a home for works being developed for Broadway. 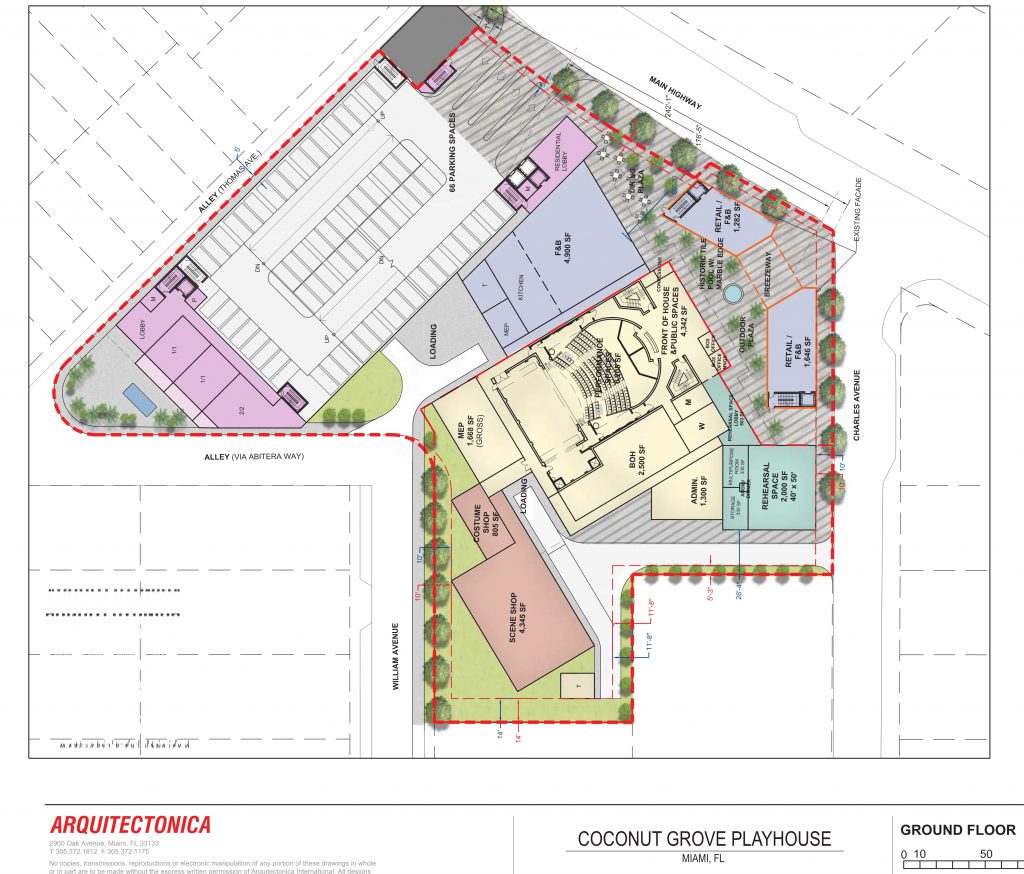 One Response to Breaking News: Plans For Coconut Grove Playhouse Saves Some Of Existing Building