Enthralling Matilda, When You Understand What They’re Saying 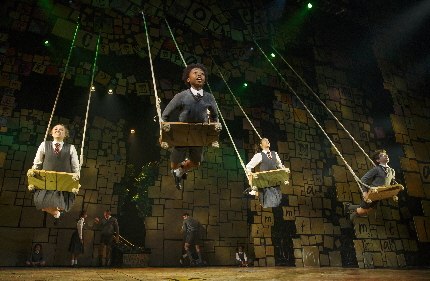 A rough estimate back in row T was that 40 percent of the lyrics were unintelligible – like the above sentence– which, believe it or not, is a major improvement over the Broadway edition we saw in 2014 about a year into the run.

But that’s solos. The incomprehensibility percentage shoots off the chart when two or more people are singing together. Scores of people left the Kravis at intermission in frustration opening night. What in God’s name is the matter with producers who have allowed this to become an ongoing hallmark of a show in New York and on tour that has so many virtues and promise?

Matilda, a smash in London in 2010 and a Tony nominee in 2013, tells of a tiny 5-year-old genius with paranormal abilities who prevails despite a nightmarish home life and an even more horrendous school. The musical is based on a tale by Roald Dahl, known for his macabre outlook in his adult work, and an unsettling darkness in his pieces for children such as Charlie and the Chocolate Factory.

The highly theatrical and surreal interpretation on stage is not exactly a children’s story, although the staging will amuse children not susceptible to nightmares. It’s really aimed at parents who remember growing up as less some bucolic Disneyfied Eden so much as a dystopian Tim Burton movie populated by mostly unthinking, uncaring and, in one case, sadistic adults.

As dark as the physical and mental cruelty can get, the gloom is fully leavened by a cartoonish comic tone throughout. It’s laced with the anarchic joy of childhood in which pre-adolescents exuberantly test boundaries and rebel against authority.

There’s a glorification of reading as an escape and of intelligence as a primary virtue. It’s meant to be an uplifting story about the power of imagination, the optimistic resilience of children and by extension the human spirit – balanced out with special effects and a child’s nose-thumbing playfulness such as the erudite scene in which one child delivers the loudest and most extended belch in theater history.

The plot focuses on a family in Buckinghamshire in which a sleazy car salesman and a slattern who competes in ballroom contests reluctantly give birth to Matilda.

They are so self-centered and selfish that they are verbally abusive when they pay any attention to Matilda at all as she grows into a preternaturally precocious savant. They especially denigrate her ability to read, think and discern. She reads Cat In The Hat – and Crime and Punishment. Her mother says incredulously and with disdain, “It’s not normal for a girl to be thinking.” When Matilda asks if her mother would like to hear a story, the telly-obsessed cretin answers in shock, “Don’t be disgusting.”

They pack her off to a school run by Miss Trunchbull, a massive mannish Olympic hammer throw champion. She despises children and savors inflicting random punishments including confinement in a closet lined with spikes and broken glass. He picks up one waif, twirls her around like a hammer and tosses her off-stage.

The sole rays of light in Matilda’s life, as far as human beings, are the sweet dishrag of a teacher, Miss Honey, and Mrs. Phelps from the Caribbean who heads the library where Matilda spends much of her free time. Matilda’s talent for story-telling allows her to mesmerize the librarian during visits with a Scheherazade-like cliffhanger story. That story is also an idealized wish-vision of familial love, yet it always turns darker and darker.

Trunchbull’s cruelties mount until Matilda decides that the injustice is just too much. And she begins to fight back.

Those familiar with Dahl’s work know that he has a duality about children, even though he tells stories from their point of view. He warmly prizes their decency, their inner resources, their capacity for forgiveness. Yet he shows they can be selfish, greedy and gross. But he’s on their side: Other than a few nurturing characters, his adults are crude, crass and cruel. Even in his world where something nasty lies around every bend, Dahl through Matilda celebrates the spirit of taking charge of your life and fighting back against injustice.

Matilda sings: (You can look up the lyrics online):
Just because you find that life’s not fair, it
Doesn’t mean that you just have to grin and bear it.
If you always take it on the chin and wear it,
Nothing will change.
Even if you’re little you can do a lot, you
Mustn’t let a little thing like ‘little’ stop you.

Despite the auditory drawback, the production is enthralling with energy and imagination. It skillfully rides the groove in which we can stomach the adults’ evil because it is so beyond the pale that it resides clearly in cartoonland. Much of that is due to Dennis Kelly’s Tony-winning book. The music and lyrics by comedian-musician-actor Tim Minchin range from a peppy pop sensibility to a dark melancholy. The choreography by Peter Darling (Billy Elliot) and direction by frequent Royal Shakespeare Company hand Matthew Warchus is endlessly kinetic and compelling.

They integrate everything from the ever-morphing pinpoint lighting of Hugh Vanstone to the delightfully bizarre costume and set design by Rob Howell. For instance, the set is dominated by thousands of a child’s ABC spelling blocks and the father’s business suit is a garish green plaid number that no one would be caught dead in, even in a 1980’s disco.

An especially fine idea was to have a few children in the school played by adults in school uniforms. In the jubilant anthem “When I Grow Up,” it’s effective when the child actors swaying wildly in swings are replaced with the adult-as-kids actors, underscoring for the audience how dreams are the most precious facet of childhood that must be preserved.

As in the New York production, Matilda is played during the tour by three girls, a practice also used notably with Billy Elliot. On opening night, Matilda was inhabited by the delightful Sarah McKinley Austin whose past credits included, no surprise, Young Cosette in Les Miserables. You have to hand it to her: She succeeds in carrying the show on her diminutive shoulders and her clarion voice rings out like a mini-Andrea McArdle in Annie. Yes, she is appealing and all the other necessary characteristics. But back in Row T where you could barely make out her face, she still exuded that strange Dahl sense of optimism and determination in direct spite of hardship. She is no helpless waif. 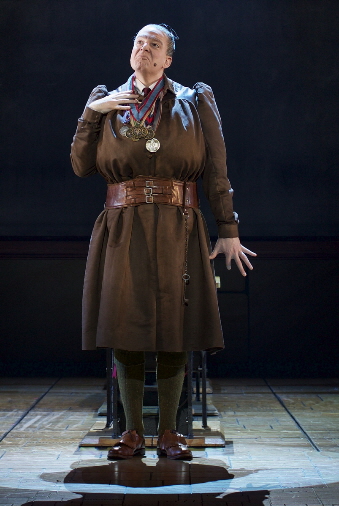 Trunchbull’s unrelenting curdled soul is perfectly captured by former Boca Raton resident David Abeles who strides around the stage like a malevolent disease with a clipped British accent and who glories in calling her charges “maggots.” His hilarious performance is way over the top – which is precisely perfect.

Back to the audibility. Who’s at fault? It’s likely a combination of factors: the Kravis’ infamously variable acoustics, the visiting sound crew’s inability to adjust to that venue, the actors’ poor enunciation in the hope of delivering British accents plus their predilection for screaming and screeching, the primarily digital keyboard orchestra drowning out the singers, and other elements. But it is more than just the Kravis venue because most people I’ve talked to agree that the Broadway version that they saw was even worse. A relative just told me they had the same problem in Los Angeles at the start of the tour. This has never been a problem with productions of Billy Elliot in which the accents are even thicker.

But this cripples the show. Audiences unfamiliar with it will have difficulty understanding the unique almost contradictory vibe since the show looks like a kid’s cartoon, yet children are being verbally, emotionally and even physically abused. The words are crucial to getting in tune with the vision. With the mush mouth sounds coming from the stage, it take much longer for the patient audience members to fall in step with this droll and poignant evening.

One Response to Enthralling Matilda, When You Understand What They’re Saying