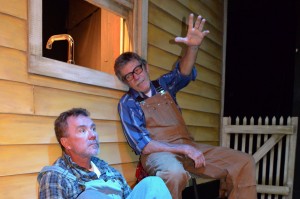 This may be one of the busiest opening weekends in quite some time. As a result, we will have a different review posted nearly every day beginning Friday morning.  We suggest checking the most recent reviews in the list of links in the red box in the upper left-hand corner and/or by pressing the white-on-teal box button in the upper left-hand corner.

Winner of the Tony Award for best play, this thrilling tour-de-force biodrama unveils the outrageous antics and humor of one of the greatest composers of all time, Wolfgang Amadeus Mozart. Set in 18th-century Vienna, Amadeus portrays the flamboyant genius, as seen through the eyes of his jealous rival, composer Antonio Salieri.

In the summer of 1921, Henry Ford, Thomas Edison and President Warren G. Harding took a camping trip into the Maryland wilderness to escape the industrial bustle of their lives in the limelight. Inspired by an actual event, Camping with Henry and Tom is an exploration of friendship, politics and leadership, and is a deftly comedic and grippingly dramatic clash of two of the greatest minds of the twentieth century.

The ninth of ten plays in August Wilson’s cycle documenting African American history, Hedley is a marathon set in the 1980s.

Girls Vs. Boys
University of Miami’s Department of Theatre Arts
at the Carnival Studio Theater in the
Adrienne Arsht Center for the Performing Arts
1300 Biscayne Blvd., Miami
(305) 949-6722
arshtcenter.org

An original rock musical performed by students and written by the creators of The House Theatre of Chicago’s smash hit, The Sparrow.  It’s described as “For sister and brother, Sam and Casey, entering the game of adolescence on opposite sides could be deadly. In this hard-partying world, hearts are broken with weapons, not words, and the pain of teen angst leaves visible scars. The soul-bearing score of throbbing rock, punk, metal and more illuminates the high-stakes, life-and-death game of sex that no one is prepared for. Fighting a fierce battle with parties and pills, will they find love or lose each other?” Book and Lyrics by Chris Mathews, Jake Minton, and Nathan Allen, music by Kevin O’Donnell and Nathan Allen of the House theatre of Chicago.  Developed at Chicago’s prestigious House Theatre, Girls vs. Boys is a brash new rock musical that follows a clutch of hormonal teens as they prowl through wild parties and deserted playgrounds looking for love and acceptance.  Girls vs. Boys is an intensely theatrical musical focused on adolescent relationships — emotional, sexual, empowering, and destructive. Professionally co-produced with The Adrienne Arsht Center for the Performing Arts.

Michael Healey’s play is a subtle and comic depiction of the power of art and the art of storytelling. It replays the adventures of a young actor from a Toronto theatre group who visits the rural Ontario home of two elderly bachelor farmers to “research” farm life for a new play. In doing so, he demonstrates the way in which a collective creation appropriated the lives of its subjects and changed their own interpretation of it. Directed by Nicole Stodard.

Comedy focuses on white and “pink” collar criminals in a low-security women’s prison in the Delaware Valley in which the inmates enjoy a lavish lifestyle until the feds announce they plan to move everyone to less cozy surroundings.  The cast includes Sally Bondi, Lisa Braun, Kim Cozort, Lela Elam, Jacqueline Laggy and Karen Stephens.

Follow the adventures of advice – giver extraordinaire, Edwina Spoonapple as she directs the kids in the neighborhood in production number after hilarious production number in her “Advice-A-Palooza” extravaganza.. (Student)

Staged reading of a two act comedy based on Henry Fielding’s novel, adapted by Peter Hawkins. It’s an 18th Century farce about a handsome young footman who strives to remain chaste and faithful to his beloved betrothed, Fanny Goodwill, despite the nefarious attempts by the conniving Lady Booby and various and sundry housemaids and other females to undo his resolve.  Director Joyce Sweeney leads a cast of Eric Salas, Jodi Turchin, Ellen Wacher and Todd Caster.

Guess How Much I Love You?
& I Love My Little Storybook
Broward Center for the Performing Arts
201 SW Fifth Ave., Fort Lauderdale
(954) 462-0222
www.browardcenter.org:

Hispaniolove is a contemporary version of  Romeo and Juliet, where the family feud is the inequalities between Haiti and Dominican Republic. It tackles the socio-political struggles of Haitians and their bittersweet relationship with sister island Dominican Republic, neighbors but worlds apart.

Stephen Schwartz’s gentle “rock” musical retelling of the Gospel According to St. Matthew with some Luke thrown in ( written by some guy named Schwartz?)  featuring an exuberant cast and hit songs such as “Day by Day.”  To read our review, click here.

The classic musical about the comical dangers of a workplace romance. Conditions at the Sleep-Tite Pajama Factory are anything but peaceful, as sparks fly between new superintendent Sid Sorokin and Babe Williams, leader of the union grievance committee. Their stormy relationship comes to a head when the workers strike for a 7½-cent pay increase, setting off not only a conflict between management and labor, but a battle of the sexes as well. Includes the classic standard “Hey There.” Stars Alexis Mitchell, Larry Bressler and Scott Travis. Directed by Sherry Steinberg, with musical direction by Loree Fox.

One Response to Entrances & Exits This Week / Openings & Closings