Maltz’ Amadeus Is Lovely To Look At, Even When You Can’t See The Actors’ Faces

Posted on November 2, 2012 by Bill Hirschman 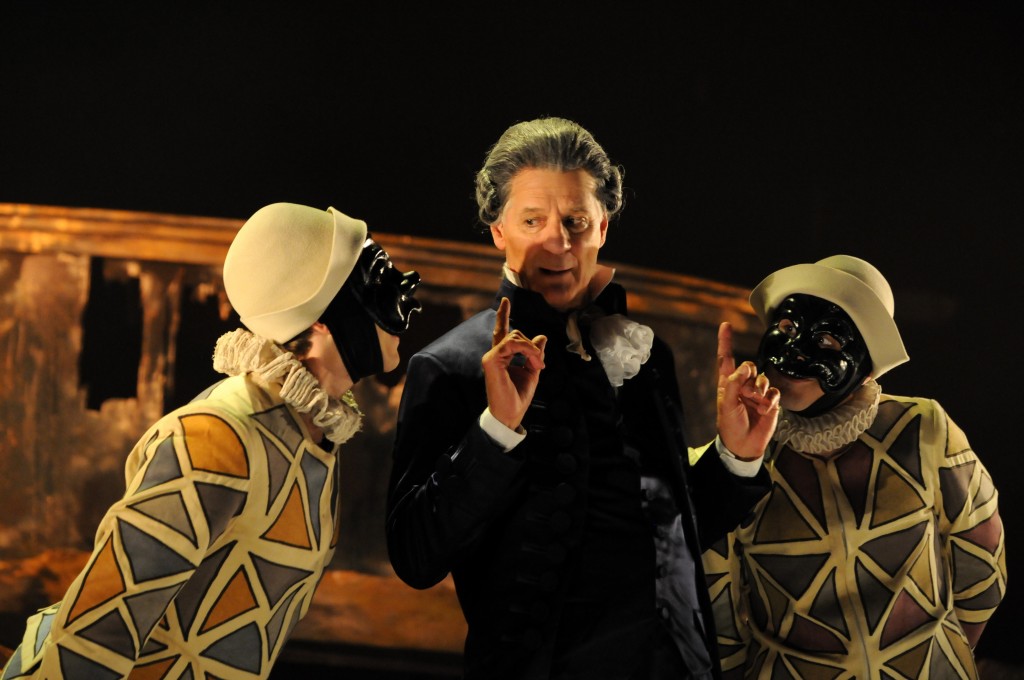 Set in a gloriously decrepit 18th century theater created in the mind of an insane old man, the Maltz Jupiter Theatre’s production of Amadeus is a visually stunning and highly inventive vision of Peter Shaffer’s meditation on whether Great Art is divinely inspired, or even if God exists.

But as beautiful as the stage pictures are, composer Salieri’s war with God over the talent of Mozart does not reach its full dramatic potential here because it’s lit like an opera – meaning you can’t see the actors acting past the seventh row. Often the lights are too murky or they come from the side, leaving half a face in impenetrably deep shadows; eyesockets become blank inky caverns.

That chiaroscuro is almost acceptable when a basso is belting out an aria and all you care about is the sound, but it’s fatal when we need to see the arched eyebrow, the curled lip, the anguished eyes of an actor for the full effect of a play to come across.

As a result, director Michael Gieleta’s production is certainly worth a ticket, especially for the superlative look and feel of this lush yet decaying world. There’s a brilliant scene where Salieri is transfixed in agony upon hearing the beauty of a Mozart adagio. The dark, muted palette is invaded by a play of vivid colors on a curtain behind Salieri in which abstract streaks of light complement the musical notes and illuminate this drab world like the opening scene of Fantasia.

Theatergoers might expect the elephant in the room to be the 1984 Oscar-winning film version by Milos Forman. But that’s never a problem because 1979 play is much deeper and more intellectually stimulating. Furthermore, Gieleta and his cast embrace Shaffer’s love of telling a story through theatrical artifice and heightened language rather than the more focused thematic spine and the literal-minded production values of a multi-million-dollar movie.

In both versions, Salieri is a devoted and disciplined composer who is popular with the masses and the Austrian court, but he knows his limitations as a mediocre talent. His shortfall is underscored by the effortlessly produced works of genius spewing forth from the profligate and prodigal Mozart, whose middle name Amadeus is Latin for “beloved of God.” Salieri cannot understand why God has blessed this childish boor with such a gift while denying him a smidgen of divine inspiration. And in a final insult, Salieri is perhaps the only person who recognizes Mozart’s profound genius while the world is praising Salieri’s lesser efforts. Salieri’s answer is to revenge himself on God by ruining – perhaps even murdering Mozart.

The somewhat fictional tale is augmented with timeless resonances such the politics of patronage as Mozart abases himself to the Emperor and his court in order to get commissions. Or watching Salieri’s sycophantic servants help destroy lives with their TMZ scandal-mongering.

Shaffer’s script is one of the best in modern British theater, resonating especially with anyone with even a scrap of creative ambition, from geniuses to the homemaker who self-publishes her recipes in sonnet form. The near-arias that he gives characters – Salieri describing the exquisite agony upon hearing Mozart’s music for the first time or Mozart trying to explain the unique glory of music to the barbarians at court — are magnificent.

In these moments, Gieleta’s mostly out of town cast soars, notably when Tom Bloom as Salieri and Ryan Garbayo unleash their passion. The actors’ ability to communicate their character’s pure love for art — transcending Mankind’s pettier instincts — enables the audience to connect with these people and forgive Salieri’s envy or Mozart’s inanity.

Garbayo, in particular, is effective throughout making credible Mozart’s abyss of duality. In some situations, Mozart is a giggling, sniggering man-child who indulges in baby talk with his fiancé and makes self-destructive  comments to the stuffy power players in the court. Yet Garbayo makes us believe that Mozart also harbors an all-consuming love of music, even though he frequently dismisses it publically. Garbayo and Gieleta also convincingly chart Mozart’s physical, mental and emotional deterioration as Salieri’s undermines his career to the point of penury and invisibility on the popular scene.

Bloom has a tougher challenge because, title notwithstanding, the play is about Salieri, not Mozart. Shaffer created a central character, like Dysart in his Equus, who is the narrator, glue and linchpin, in fact our surrogate. Bloom is clearly a fine classical actor who delivers Salieri’s long speeches with a satin smoothness that reeks of a courtier’s cultured urbanity.

But the Salieri that he and Gieleta have created lacks a bravura dynamism that other actors have used to keep the audience hooked: a sardonic humor, an underlying anger, there are many possibilities. It is only when Salieri/Bloom lets loose with his visceral pain, jealousy and awe that Salieri emerges as an engaging character.  This robs the production of a crucial topspin. Again, if we could see his face more often, we’d probably see a more subtle performance going on.

The rest of the 14-member cast is adequate if not outstanding. We know this is a very sore point for the Maltz administration, but there was no need to go to New York for most of these roles. Michael Brian Dunn (Zangler in the Maltz’s Crazy For You) is appropriately fatuous as Emperor Joseph II and Alexis Bronkovic is passable as Mozart’s fiancé and then wife Constanze, although her voice sounds more like someone who just had her nails done at the Aventura Mall – which you might argue is appropriate.

Gieleta, an experienced British director of plays and opera, imbues the evening with a steady fluidity that never flags. He often stages motionless tableaus like an opera scene; but other times, characters slide in and around each other. He uses every inch of the set, taking advantage of the upper levels of the royal box and the rake of the theater stage.

And indisputably, he has led talented creative team members whom he either has worked with before or knew by reputation. All of them gorge themselves on the opportunities to bring a fresh approach to such meaty material.

Top of the list is Philip Witcomb’s breathtaking set: the stage and royal box of a European opera house that is beyond dilapidated, the gilt edges flaking off, the ceiling lath exposed, the curtains in tatters, the entire structure crumbling in on itself. It leans over like those long abandoned farmhouses that the wind has blown into diagonals rather than verticals. Chandeliers have fallen to the stage and a piano forte’s third leg has collapsed so the instrument slants to the floor. This is not meant to be a literal theater, but Salieri’s imagining of one as he speaks to us from a madhouse.

The vision is augmented by video and still projections on the opera stage’s curtain, created by Andrzej Goulding who seamlessly integrates his ideas into Witcomb’s work.  Among his additions are ominously looming silhouettes of fellow madmen in the asylum, although sometimes the moving images distracted from the action on the stage.

Before we diss it again, acknowledge that Witcomb’s creation would not look half so impressive without Keith Parham’s evocative and intricate lighting design that demonstrates his technical expertise and imagination. He creates a dozen different locations and even more emotional moods by painting each scene with a different lighting plot.

But Parham’s overall lighting scheme from a pragmatic standpoint, endorsed if not dictated by Gieleta, looks precisely like the misbegotten lighting at most of Florida Grand Opera’s productions over the past two seasons. We get it: Side lighting is dramatic; it thematically underscores the yin and yang of Man’s nature, Salieri’s war with God, etc. etc. The idea of having people in near darkness speaking key lines and plot points might echo the poor lighting of an old theater. It doesn’t matter. It doesn’t work. Ask the ushers at the back of the orchestra seats.

More than a nod is due Fabio Toblini’s costumes and Gerard Kelly’s wigs. They have clad the men in a sumptuous-looking array of waistcoats, tricorns, ruffled shirts and knee breeches. The women parade in elegant gowns that bespeak the period.

Despite its faults, this Amadeus has enough virtues to recommend it, beginning with a chance to see a professional company deliver Shaffer’s brilliant play. The Maltz, in particular, deserves high praise for slowly scheduling more straight plays like Twelve Angry Men and Sleuth, and applying its considerable resources and talents to projects beyond its forte of reinventing musicals such as Hello Dolly and Cabaret. Amadeus is a step forward. 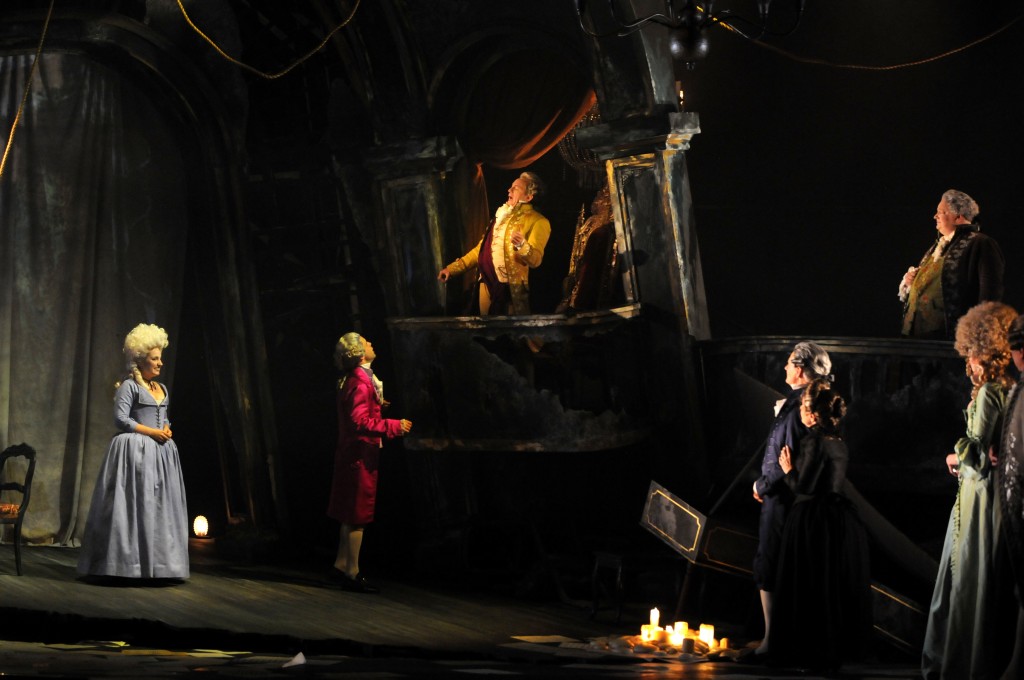 One Response to Maltz’ Amadeus Is Lovely To Look At, Even When You Can’t See The Actors’ Faces