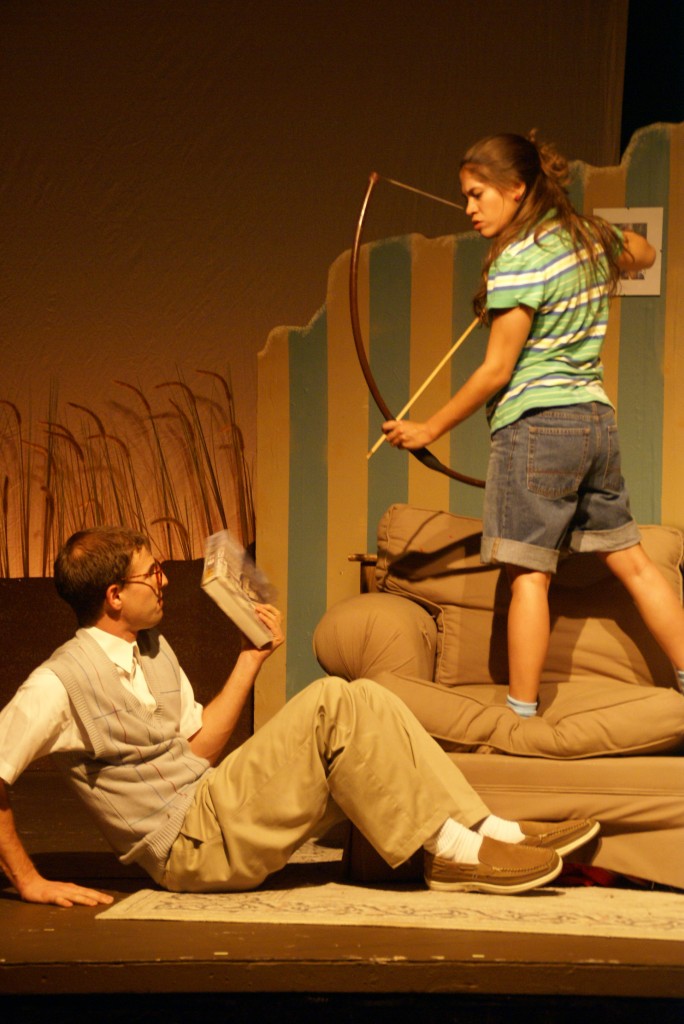 A play championed by New Theatre, Edith Can Shoot Things and Hit Them , received a citation this weekend in the American Theatre Critics Association ‘s new plays competition.

A. Rey Pamatmat’s Edith bowed at New Theatre in Coral Gables in October as the second stop in the Rolling World Premiere Program of the National New Play Network.

The theater critics association also named Yussef El Guindi’s Pilgrims Musa and Sheri in the New World, a play about immigration and assimilation, winner of the $25,000 Harold and Mimi Steinberg/ATCA New Play Award for 2012. The Steinberg/ATCA recognizes the best American scripts that premiered professionally the previous year outside New York City.

Ken LaZebnik’s On the Spectrum and Pamatmat’s Edith received Steinberg/ATCA citations and $7,500 each. Both LaZebnik and Pamatmat are first-time new play award winners, while El Guindi won ATCA’s 2009 M. Elizabeth Osborn Award for an emerging playwright.

Checks and commemorative plaques were presented to all three at Actors Theatre of Louisville’s Humana Festival of New American Plays, March 31.

The award was created by ATCA in 1977 to recognize excellence in playwriting by honoring the best new plays not yet produced in New York City. Since 2000, it has been generously funded by The Harold and Mimi Steinberg Charitable Trust, making the $40,000 Steinberg/ATCA the largest national new play award of its kind.

The Steinberg Charitable Trust was created in 1986 by Harold Steinberg on behalf of himself and his late wife. Pursuing its primary mission to support the American theater, it has provided millions of dollars to encourage new productions of American plays and educational programs for those who may not ordinarily experience live theater.

“The long-standing partnership between the Harold and Mimi Steinberg Charitable Trust and the American Theatre Critics Association has recognized some of today’s greatest writers, and helped identify the great playwrights of tomorrow,” said trustee Jim Steinberg. “We’re delighted to help support the unique telling of tales on the American stage.”

El Guindi’s Pilgrims Musa and Sheri in the New World is a gentle romantic comedy wrapped around a serious examination of issues facing immigrants today, much as they did in the past. An Egyptian immigrant who drives a cab strikes up a romance with a quirky American-born waitress, but the clash of cultures is only the hook El Guindi uses to explore the diversity of opinions even within ethnic groups in the struggle for assimilation and belief in the American Dream. It premiered June 17 at ACT Repertory in Seattle.

Born in Egypt, raised in London and now based in Seattle, El Guindi received a B.A. from American University in Cairo and a 1985 MFA in playwriting from Carnegie-Mellon University. He frequently examines the collision of ethnicities, cultures and politics that face Arab-Americans. He has had at least 16 plays produced since 2001 in regional theaters from Durham to Anchorage. At the same time, he has worked as resident playwright at Silk Road Theatre Project; literary manager for Golden Thread Productions in San Francisco; playwright in residence, dramaturg and lecturer at Duke University; and dramaturg for Eureka Theatre and reader for The Magic Theatre, both in San Francisco.

LaZebnik’s On the Spectrum depicts a young man with Asperger’s Syndrome passing as “typical” after years of mainstreaming and therapy. He connects with a woman who proudly champions her autism as a difference, not a disorder. Their love story reveals the contradictions between the desire for acceptance and for achievement. Among the choices: live in a fantastic world of the mind or join the more mundane society that typecasts you as your illness. The work premiered November 12 at Mixed Blood Theatre in Minneapolis.

A. Rey Pamatmat’s Edith Can Shoot Things and Hit Them was first produced in by Actor’s Theatre of Louisville/Humana Festival of New Plays, then New Theatre in Coral Gables, Florida, and Actor’s Express in Atlanta. This moving, bittersweet play portrays a very untraditional family of three young misfits: a brilliant 16-year-old and his precocious 12-year-old sister, abandoned by their widowed father, and the brother’s lover who runs from a family denying his nascent homosexuality. Their fanciful bonding against the challenges of the real world, their resilience and their realization of their limitations result in a meaningful comic drama infused with empathy and wry humor.

“Despite vanishing government support and faltering donations, America’s regional theaters have persevered and prevailed as this country’s preeminent crucible for vibrant and important new works,” said Hirschman. “This year’s submitted plays encompass a dizzying range of styles and themes, produced by a cadre of experienced and novice playwrights who are inarguable proof that theater remains a vital and relevant art form in the 21st century.”

ATCA was founded in 1974 and works to raise critical standards and public awareness of critics’ functions and responsibilities and to recognize excellence in the American theater. The only national association of professional theater critics, with several hundred members working for newspapers, magazines, radio and TV stations and websites, ATCA is the U.S. national section of the International Association of Theatre Critics, a UNESCO-affiliated organization that sponsors seminars and congresses worldwide.

ATCA also sponsors the M. Elizabeth Osborn Award for an emerging playwright and administers the $10,000 Francesca Primus Prize, funded by the Francesca Ronnie Primus Foundation, honoring outstanding contributions to the American theater by a female artist who has not yet achieved national prominence. Annually ATCA makes a recommendation for the Regional Theater Tony Award presented by the American Theatre Wing/Broadway League, and its members vote on inductions into the Theater Hall of Fame. For more information on ATCA, visit www.americantheatrecritics.org.

This entry was posted in News and tagged A. Rey Pamamat, Edith Can Shoot Things and Hit Them, New Theatre, Pilgrims Musa and Sheri in the New World, Yussef El Guindi. Bookmark the permalink.