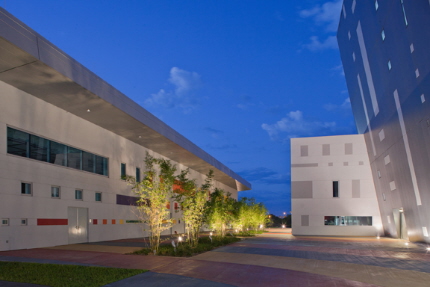 It’s not exactly a wandering band of players, but New Theatre will move next month into its fifth “permanent” home in 27 years, a small flexible space at the South Miami-Dade Cultural Arts Center in Cutler Ridge.

“We’re very lucky,” said a much relieved Eileen Suarez, managing director of one of the oldest continually operating companies in the region.

The troupe will open David Caudle’s Visiting Hours Feb. 7 in the 2 ½-year-old facility at 10950 SW 211 Street, which will not only allow New Theatre to finish its current season but give it the prospect of a stable home base.

New Theatre then landed temporarily at Artistic Vibes, a small warehouse space near The Falls shopping center, to mount one full production, My First, My Fist, My Bleeding Seeded Spirit, as well as a short play festival, but it was never meant as a permanent solution.

The move to the Roxy took a company that was once a fixture in Coral Gables and moved it 8 miles to the west. The move to SMDCAC would push it 13 miles further south of the Roxy location.

Whether New Theatre’s central Dade patrons will follow is a question mark even for the theater’s supporters. “There’s always going to be that concern, but there are concerns regardless of where you go,” Suarez said. She’s optimistic that the sleek new facility located near dining and shopping options will make audiences consider theater as part of an afternoon or evening out on the town. The location is also easy to find off the Turnpike.

The new space being rented by the New Theatre is not located in SMDCAC’s 129-seat black box theater inside the main building, but in a smaller “lab theater” inside the adjacent structure. The space can be used many ways, but Suarez expects to house 50 seats. That compares with the 100 seats it had back in Coral Gables and about 125 available at the Roxy. But New Theatre had been staging more of its recent shows with the entire audience sitting on the curtained off stage at the Roxy, resulting in an intimate atmosphere that Suarez hopes to continue in the new space.

Another plus is that the SMDCAC, which is operated by the county government, will provide New Theatre’s box office services. From a marketing standpoint, patrons coming to the center for other events will become aware that New Theatre is offering shows next door.

The downside is that New Theatre will not have office, storage or scene shop space on site. It will operate temporarily from a warehouse in Hialeah until permanent quarters are found, Suarez said.

New Theatre first considered moving to the SMDCAC when it was looking for a new space in 2011 but decided “the parameters weren’t right,” Suarez said. But since then, the company has presented children’s programs there as well as one weekend of Juan Sanchez’s mainstage play Property Line.

The multi-ethnic troupe initially dedicated to classic theater was created in 1986 with a $12,000 budget by Rafael and Kimberly de Acha. It opened with George Buchner’s little seen Woyzeck mounted inside a dance studio.

The company operated about 15 years from a tiny storefront at 4275 Aurora Street just south of the Miracle Mile.

Rafael de Acha made the most of meager resources and widened his focus to contemporary works. He mounted both parts of the epic Angels in America in 1997, an acclaimed Hamlet in 2002 and a harrowing The Turn of the Screw in 1998 with only two actors and a few lights. The theater gained renown when de Acha underwrote the creation and staged the premiere of Nilo Cruz’s Anna in the Tropics, the first play by a Latino to win the Pulitzer Prize for Drama in 2003. The work was subsequently produced at several regional theaters and on Broadway.

The troupe moved to a heavily-renovated movie theater at 4120 Laguna Street in 2001, a 100-seat space that was unusually narrow and compact but visually better looking. An office, costume storage and a meeting room were located in a second floor above the lobby.

Then in August 2011, the Laguna landlord followed through on a frequently-made warning and announced he was selling the property to a developer who would raze the buildings. Once New Theatre moved out in the fall, the threatened demolition was delayed many months.

The company moved into the Roxy space, which had several auditoriums located in the elbow of a shopping center at 1645 SW 107th Ave. While New Theatre staffers were grateful for the roof, they couldn’t ignore that the building was not being kept up very well.  Last fall, the county locked the doors and posted a notice that indicated an unsafe condition existed due to water and/or sewer problems.

The company recently won a $35,000 grant from the Knight Foundation to present its One-Act Play Festival in four locations around the county.

This entry was posted in News and tagged Eileen Suarez, New Theatre. Bookmark the permalink.