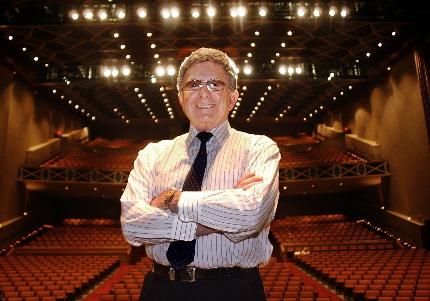 Nationally-known theater impressario Zev Buffman, a key figure in the evolution of South Florida theater, died Wednesday at the age of 89 in Seattle, according to a news release from Ruth Eckerd Hall which he managed in Clearwater.

A charismatic man with an elfin visage and a slight accent from his origins in Israel, he was known for enthusiasm, showmanship and drive as he managed and significantly developed three South Florida venues as well as a dozen others across the country. His Broadway productions earned nearly Tony Award nominations  across a half-century, he helped develop the modern-day national touring system, and was a co-founder of the Miami Heat.

“The end of the chapter,” wrote former Playbill publisher and friend Leslie Feldman. “A modern day P.T. Barnum and the greatest showman I’ve ever known….. With Zev and (the late publicist Charlie Cinnamon), brick-by-brick, theatre by theatre, city by city and every Buffman produced NY Broadway opening, Zev was the architect of the modern touring Broadway subscription series that is now called Broadway Across America….”

His resume as an old-style hands-on producer listed more than 100 national tours and 40 Broadway shows including the original U.S. production of Joseph and the Amazing Technicolor Dreamcoat and Elizabeth Taylor’s fabled turns in The Little Foxes and Private Lives, the latter with Richard Burton and the former, which first bowed in Fort Lauderdale’s Parker Playhouse, providing her Broadway debut in 1981.

Seeking a Miami area venue to present a show he was producing in 1962, Pajama Tops, he was shown the then-dormant Coconut Grove Playhouse. He leased it, then bought it, resurrected it, remodeled it with a balcony and produced shows there for eight years.

He brought in New York and Hollywood actors to star in roles they might never get the chance to play elsewhere. Former Miami Herald theater critic Larry DeVine recalled today some memorable work that Buffman brought to theaters across the nation.

“Zev indeed was a character, liking deals and often taking wild chances… many that paid off. Oldtime Grove aesthetes will remember the once-in-a-lifetime Buffman production of A Lion in Winter, with the celestial cast of George C. Scott and Colleen Dewhurst. My God. It played what, one week, two weeks, and then vanished into the ether; but Buffman had got it cast, produced and bestowed on his Miami audiences.”

Buffman did a similar job managing and reviving other venues such as the Saenger Theatre in New Orleans; the Chicago Theatre; the RiverPark Center of Performing Arts in Owensboro, Kentucky, and the Royal Poinciana in Palm Beach.

He helped lead the conversion of an old municipal auditorium where Jackie Gleason taped his television program into a full-scale arts venue, renamed  the Miami Beach Theater of Performing Arts. He served as its president from 1976-1990.

With Louis Parker, he pushed for the creation of Parker Playhouse in 1967 as a showcase for his productions, one of the first arts presenting venues in Fort Lauderdale, and was its primary producer for more than 20 years. He toured his productions both through the Grove and the Parker for a few years.

He was often credited with invigorating the commercial areas around most of these venues.

He, Cinnamon and several others also initiated the Coconut Grove Arts Festival around 1963. He co-founded the Miami Heat basketball team in 1987, campaigned for its arena and served as a general partner.

He was born in Tel Aviv on Oct. 11, 1930. His love of movies like Gunga Din, which helped teach him English, prompted him after military service to migrate in 1951 to Hollywood where he worked as an actor in small parts. Within a decade, he was producing works and developing a string of theaters across the country.

After leaving the Grove Playhouse in 1971, he spent the next decade developing the Zev Buffman Broadway Series, which brought national tours across Florida, New Orleans and Chicago.

DeVine pointed to, “So many other wild-hair ventures: Charlton Heston prodigious as A Man for All Seasons, yes, but the acidulous Shelley Berman with E.G. Marshall in The Odd Couple, well, no. Buffman found the very young Karen Black to play the Marilyn Monroe role in After the Fall –with Jose Ferrer as Quentin, a mammoth role he reportedly learned (almost 100 percent) in a week.”

His touring paradigm became a template for many companies. He sold the firm and other theaters in 1988 to Pace Theatrical Group, which has morphed over the years into Live Nation’s Broadway Across America.

His work regularly won so many Carbonell Awards for theatrical excellence in South Florida in the now-defunct road show categories that observers joked he should just back up a truck to the ceremony to pick up his awards. In the 1983-1984 season, his productions received 11 out of a possible 14 nominations and swept the four categories. By the 1986-1987 season, the road categories had swelled to six. Buffman shows received 22 out of a possible 30 nominations and swept all six categories. He also received the region’s highest theatrical honor, the George Abbott Award, in 1980.

Buffman moved in 2003 to Owensboro, a small college town in western Kentucky where an ailing sister lived. He agreed to manage a local theater complex but it needed “product.” He gathered Angela Lansbury and an equally well-known collection of friends to help create an International Mystery Writers Festival that would choose and produce mount full productions or readings of complete plays, one-acts and radio scripts. The first edition in 2007 sorted through 1,000 entries and mounted 12 productions.

Creating the festival won him a Raven Award in 2010 from the Mystery Writers of America and also a 2008 Edgar Award for producing the best play in the genre, Panic.

In 2011, he moved to the west coast and became president and CEO at Ruth Eckerd Hall and the Capitol Theatre in Clearwater, heading similar efforts to revitalize the two facilities.

He and his surviving wife Vilma retired to Seattle in 2018.

In a 2013 interview about an on-stage recreation of radio dramas that he wanted to tour, he was asked whether it seemed strange for an 82-year-old man to be running an entertainment complex on Florida’s west coast, helming what he hoped will be a national tour and changing the fate of empty theaters across the country by providing such relatively inexpensive shows for medium sized venues.

He laughed off the mention of retirement. Buffman asked, “What would I do?”

To read a detailed account of his early life, read a story from The Jewish Press of Pinellas County by clicking here.