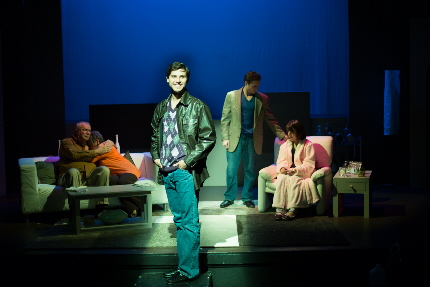 James Hesse as the gay brother narrates the dissolution of his family played by, from left, Larry Kent Bramble, Phyllis Spear, Jeffrey Scott Leshansky and Sarah Miller in Broward Stage Door’s The Twilight of the Golds. / Photo by George Wentzler

It’s hard to know what is more upsetting while watching family relationships disintegrate in the affecting drama The Twilight of the Golds at Broward Stage Door. Is it that the precious loyalties might disintegrate at all or the disturbing reason that they disintegrate?

The premise of Jonathan Tolins’ 1993 play imagines that science can predict that a young couple’s unborn fetus will grow up gay. That creates a dilemma for the couple, her parents and her gay brother. Should the couple have the child or abort it?

Right there, there’s a problem for an audience in 2013. Certainly uncounted people today still would find this a quandary, but ultimately who today would kill a desired child because of a predicted sexual orientation? The question itself is abhorrent because it presupposes an unconscionable level of homophobia.

But when the deep disagreement in the Gold family exposes unspoken prejudices, it results in their shattering discovery that while they still love each other, that love has limits. To see ostensibly devoted people like yourselves or your relatives come to that conclusion is unnerving, even borderline incredible in its literal sense.

Tolins’ thought-provoking script is uneven and Stage Door’s production has strengths and weaknesses. But under Michael Leeds’ direction, Twilight emerges as a moving tragedy spiked with surprising amounts of comedy as well as compassion.

The memory play opens with brother David (an affable James Hesse) telling us that we are about to see the run up to the last time the family was together. David, a set designer for the Metropolitan Opera, introduces his family. His shallow but likable sister Suzanne (Sarah Miller) is a Bloomingdale’s buyer who abandoned med school because she hates being tested. Her handsome husband, Rob Stein (Jeffrey Scott Leshansky), is a pragmatic researcher with a genetics lab. Father Walter (Larry Kent Bramble) comes across as a gruff  banker and mother Phyllis (Phyllis Spear) as a pearl-bedecked matron. They veer toward stereotypical upper middle class Jewish urbanites, but their affection for all three young people is palpable even though they seem unmoored in a world changing faster than they’d like.

All view themselves as open-minded, although the audience must wonder how much is being suppressed to maintain a relationship with David whose partner isn’t invited to Suzanne and Rob’s third anniversary dinner for the family.

Before dinner, Suzanne surprises everyone including Rob with the news that she’s pregnant. Serendipitously, Rob’s company has secretly developed ways to analyze amniocenteses for a surprising array of traits and the couple agrees to be the first guinea pigs. Chaos erupts a few weeks later when the tests indicate the child will be born gay.

This was written and is set almost as a period piece 20 years ago, but it’s still shocking that the immediate reactions from everyone except David are shock, denial and an unspoken but clear preference that they were not facing this. While no decision is made immediately and the couple is genuinely ambivalent, abortion is put on the table instantly as an option.

In 1993, thousands of people were dying of AIDS each year and the general public had no reliable idea how the plague was being transmitted. That’s a crucial part of why the Golds hesitate to have the child. Or at least that’s the rationalization they use. They also believe that society’s ingrained homophobia would put the child in a no-win situation. “If only it was deformed it, wouldn’t be so complicated,” Suzanne says.

But David argues passionately that aborting the child would be like killing David; it would pass judgment on David’s homosexuality. “You’re killing me,” he says. He repeatedly likens it to Hitler’s ethnic cleansing and eugenics.

The ensuing back and forth leads to debates such as the one in which Phyllis asks David, “If you had the choice, would you be gay” – a question that David finds in itself a clue to the fragility of his parent’s acceptance of his sexual orientation.

There’s no doubt later when a showdown between David and his father ends with Walter’s declaration that he has and always will love David, but that he thinks the young man is sick and diseased.

Tolins loves to write clubfooted foreshadowing. There’s a scene in which the blood relatives have a group hug in reaffirmation of their love. The father says, “When this goes, we’re in trouble.” Sure enough, as the arguments intensify, David draws parallels between the familial apocalypse on stage and Richard Wagner’s end of the world in Götterdämmerung from the Ring Cycle, an apt if overblown analogy.

Suzanne, with Rob’s approval, makes a decision which has unintended repercussions when carried out. Side note: In the 1996 movie version, Suzanne makes the opposite choice, although both end up tragically.

Once you get past the heinous premise and melodramatic passages, Tolins’ script gives every character a long soliloquy in which their veneer disappears and they explain their misgivings in details. This draws a more three-dimensional picture of the concern of the older parents, who would otherwise come across as sit-com stick figures. These are the strongest sections of both the script and the production.

Other than Hesse’s winning performance, which is supposed to be a bit theatrical, there’s something unreal and stagy about the entire production. Spear, Bramble and even Miller have trouble making their characters seem more than stock characters for much of the play. But in those monologues, suddenly every actor shines, especially Spear and Bramble. Spear, in particular, reveals a depth of rueful emotion at a world with “too much information.” Her Phyllis may be deeply upset by modern life, but she deals with it by silent acquiescence and, in that moment, Spear makes that choice plausible.

Leshansky’s work is perfectly serviceable as a husband admirably supportive of whatever his wife wants, but who would be happy to have this cup pass by. Miller is weaker than the rest of the cast, passable in the part but not as vibrant as the others. Her nasally voice doesn’t carry the same dramatic heft as the rest, although it was stereotypical Jewish American princess.

A structural weakness is that Tolins takes 20 long minutes depicting a happy family unit before the play takes the turn it has meant to all along: When Suzanne is about to eat a crudite that her brother had begun to eat, her mother sharply barks something like, “Don’t eat that! It’s been in his mouth!”

Tolins touches on several other themes including the ever more frequent moral dilemmas accompanying technological advances. Another asks where the proper boundaries lie between the family unit and an individual’s (or couple’s) life.

On the plus side, once again, Stage Door’s team keeps delivering better and better production values. Co-founder David Torres has designed a lovely Ikea-inspired apartment of stylish, white furniture and panels of beige, brown and ecru. The set has been deftly lit by Ardean Landhuis. They have accented the scenes with tone-setting projections including a dying orange-red sun. Torres has skillfully woven in passages of opera that underscore the familial strife on stage.

Stage Door’s production of Twilight is reliable enough to give patrons something to talk about on the ride home. It also extends the string of steadily improving work worth seeing that has included A Shayna Maidel and Brighton Beach Memoirs.