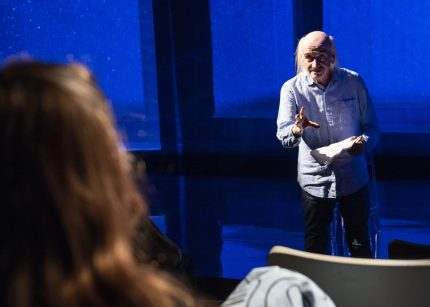 Ruben Rabasa focuses on one audience member in Rubenology: The Making of an America Icon / Photos by Magnus Stark

In Shakespeare and the performing arts before and since, often there is a character called a clown, not one you find in circuses or as a classroom cutup – although they may share similar qualities.

In the 84-year-old Ruben Rabasa, a tall skinny but gnome-like looking creature brimming with life and humor, GableStage audiences are treated to a wild and quirky interaction with this winning clown in Rubenology: The Making of An American Legend.

Rabasa is a veteran actor logging more than 60 films like the current Father of the Bride, television shows like The Perez Family, and theater like Miami New Drama’s The Cubans, not to mention TikTok.

But here he delivers a one-man standup routine with such infectious self-deprecating abandon that you have to be a grouch not to smile from the moment this creature with long white hair cascading from a bald pate bounds onto the stage in a gold-flecked baseball jacket to the pulsing “O eh, o eh” from Miami Sound Machine’s “Rhythm is Gonna Get You.”

For the next 55 minutes, he tells us disconnected but inherently amusing stories of his past in this country that include an early job in which he smashed a bar of butter onto his head. He converses ad lib with audience members and spotlights at least one each night.

He often has conversations with himself as characters from his past, previously recorded film projected on large swaths of cloth across the stage. Although his timing of the interactions with the projections were sometimes a tad off, most of the time no one minded.

He is aided by a young assistant he calls Mimi who valiantly tries to keep up with him, rolling on furniture and at one point stalling the audience while Rabasa noisily urinates in an offstage bathroom. She gets no credit in the program.

Oddly, the seemingly stream of consciousness script – such as it is – written by Rabasa and Vanessa Garcia (of the long-running immersive The Amparo Experience) is a strange foundation. Like Rabasa, it wanders all over the map without a shred of recognizable organization or structure. Although it indirectly celebrates his ethnicity, there is virtually no serious mention or even notice of his Cuban roots and past other than some projected photos. And it really doesn’t describe how he became a self-described American legend, a title he means as a joke but his rabid followers across the country would attest to.

The script reportedly has been a work in progress, which may explain why he spent the last ten minutes or so sitting on a stool reading from pages.

Director Victoria Collado (also an Amparo veteran as is Rabasa himself) does her best not to harness Rabasa but to guide the evening.

But the impact of the production suffers from a handful of problems. First, Rabasa’s English is so heavily accented – and there seems no attempt on his part at clear enunciation – that 10 percent or more of his verbiage is unintelligible.

Second, many of the laugh lines are spoken in Spanish. He must be effective at landing those lines because the opening night audience, a majority seemingly with Hispanic roots, chortled and guffawed through much of the evening. But they were lost on those who don’t speak the language.

The production, a special non-season inclusion, is co-produced by Abre Camino Collective, a studio founded by Collado and Garcia.

As with Shakespeare’s clowns, Rabasa makes us laugh but there are subtle commentaries buried deep down about the immigrant experience that are worth thinking about.

Note: Masks are required inside the auditorium.

This entry was posted in Performances, Reviews and tagged GableStage, Ruben Rabasa, Rubenology: The Making of An American Legend, Vanessa Gar, Victoria Collado. Bookmark the permalink.