A Voyage To The South Pacific Once Again At The Maltz 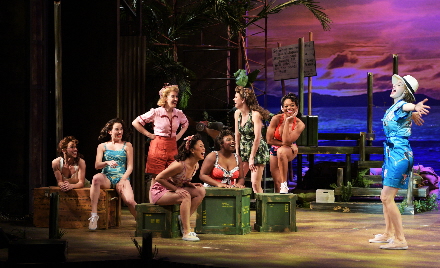 It’s likely that people involved with the Maltz Jupiter Theatre’s upcoming production of South Pacific know that cynics will question why mount yet one more production of this classic.

After all, the 1949 musical has been produced over and over and over again in South Florida let alone the rest of the country, not to mention the brilliant 2008 Bartlett Sher revival at Lincoln Center that is still touring the country.

First is the Richard Rodgers-Oscar Hammerstein II show’s persisting relevance in 2018: the themes of a society divided by subtle unspoken racial prejudice and a sense of a world on the brink of violence, both setting a background for a love story among disparate people.

“When you’re dancing on the edge of abyss, you have to get along. All the petty things that separate now seem small and ridiculous,” Greenberg said. “It’s incredibly still so applicable; it’s that ‘The more things change the more things stay the same.’ This show exemplifies that.”

Another reason is its unsurpassed quality, Greenberg said. “More than anything it’s a gorgeous, gorgeous score and the characters are so vibrant. You look at the old warhorse that has been around forever” and know why it is regularly revived.

Davie said, “When I started working on this show, I was surprised how well it’s written. Every line, every stage direction is so right, there’s nothing you have to do to make it work.”

The director added, “When you get to steep yourself in something structurally as genius as this, it’s a rare pleasure and honor and a beautiful place to live both musically and poetically.”

Greenberg, who directed Barnum at the Maltz in 2009, has a history of bringing a freshness to familiar musicals, most notably a production of Guys and Dolls in London. The Maltz has a tradition of reinventing classic shows like Marcia Milgrom Dodge’s Gypsy and Hello, Dolly! without deconstructing them. His goal is much like it was for Guys and Dolls: “It is with a very specific goal of reinvigorating the piece,” he said.

This production plans to zero in on the wartime zeitgeist of “mortality staring you in the face, and falling in love. You know you could die at any moment and your time becomes amplified,” Greenberg said.

For Greenberg, there are a couple of personal plusses: “I have a deep respect and affection for (the Maltz’s Producing Artistic Director) Andrew Kato who I came of age with in New York,” he said. And, he said with a laugh, “my parents live down the road” in Palm Beach Gardens.

While many patrons may bring memories of Mary Martin or Kelli O’Hara as Nellie or the visuals of the 1958 film version, Greenberg isn’t worried about interfering comparisons. “Some people come in with a sense of nostalgia. But we rarely remember the actual event; we always remember how it made it made us feel.”

It helps that he has the Maltz’s fabled resources including a superb creative team and a large orchestra to caress a score that includes “Some Enchanted Evening” and “This Nearly Was Mine.”

But he is especially impressed with the acting corps: “Something really special resonates. I’ve never been in a rehearsal where there’s such a spark and a champagne fizz in the air.”

Others in the cast include Nicholas Rodriguez, who recently completed the national tour of The Sound of Music, as Emile DeBeque, and Stephen Mark Lukas (The Book of Mormon on Broadway and on the national tour) as Lt. Cable.

But the actor he enthuses over is Davie, who played Yvonne/Naomi in Sunday in the Park with George in the 2017 Broadway revival, Violet Hilton in the recent Broadway revival of Side Show, and Young Little Edie in Grey Gardens (winning the Theatre World Award for Outstanding Broadway Debut).

Greenberg said, “She is a huge Broadway performer. More than the fact that she is beautiful and has a glorious singing voice, she is an actress with a fragility and sense of immediate danger. She is always in the moment.”

Chemistry between the leads is crucial, so it helps that she and Rodriguez have known each other for years – he’s her boyfriend’s best friend. “You don’t have to learn each other. You don’t have to have small talk. You already have a kind of chemistry.”

She’s not worried about the score or the lines. Her main worries? “Washing my hair on stage and wearing a bathing suit on stage.”

Greenberg, who has helmed acclaimed productions in the United States and Europe, had a daunting experience with the work that almost ensured he’d never do it again.

When he was 10 years old, his mother auditioned to be Nellie in a production at their synagogue in Rockland County, New York. She didn’t get the part and settled to be one of the nurses in the ensemble. The budding child thespian agreed to be in the ensemble in the background.

“But on opening night, they gave the boy playing Jerome (Emile’s son) a toy boat. I was so red with envy, I said to myself I will never be in a chorus again.”

After that experience, he had little to do with the show before now. Coming to it relatively fresh, he was surprised. “I had no idea this show was this gripping, this moving, and enlightening. So what I’m trying to do is shine a light from inside.”