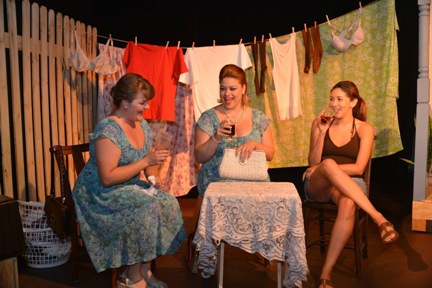 But snaking through the jovial landscape is a quiet mourning that the good times are irretrievably behind us in a changing world. The melancholy gives the plays a bit of heft, although it’s the seasoning, not the meat, and you yearn for that theme to be developed more fully.

You just have to settle for a gently hilarious evening watching residents of 1970s small town Texas coping with serious problems like adultery and post-Vietnam PTSD, eased by the titular liquor and beer, and a delightful quirky sense of humor.

Like Texas bard Horton Foote, McLure doesn’t look down on these blue-collar rednecks and their childhood peers fighting to climb the social ladder to the country club class. Respect and compassion imbue these plays, even while lampooning the lack of sophistication of heroes and heroines.

Characters look out over the desert or into star-crowded night skies and reflect in credible but near-poetic terms on the  loveliness of nature – leaving unspoken their unconscious appreciation how tiny their mountainous woes are in relation to it.

Laundry & Bourbon is set in a fenced-in backyard on a hot summer day where Elizabeth (Gladys Ramirez) is staring out to the desert, taking a breaking from folding laundry hanging on the line. Her best friend, Hattie (the terrific Breeza Zeller) arrives seeking a respite from her hell-raising children in favor of small talk and a few fingers of bourbon.

The ebullient and irreverent Hattie perceives something wrong with her friend when Elizabeth complains of being “hot and hollow.” In fact, there are several problems, starting with the disappearance once again of Elizabeth’s husband, Roy. The high school hero has been adrift since leaving Vietnam with a wound two years ago, but once again he has disappeared on what is likely a serious drunk and session of catting around.

Aggravating things is the appearance of Amy Lee (Andrea Bovino), the self-righteous wife of a hardware store owner who enjoys lording her social position over the other two. She tries to wound Elizabeth with a recent sighting of Roy and a local floozy.

McLure lathers on believable dialogue peppered with down-home witticisms such as “That child has no more sense than God gave a screwdriver.” But each looks back on the past. Elizabeth remembers the glory days of her courtship and early marriage to Roy, the studly Don Juan who tooled around the town in a 1959 pink Thunderbird convertible. Hattie is happily married in a way but she pines for the days in high school when she was matched with Roy’s equally wild partner, Wayne, now doing time for car theft.

Several comic situations evolve and the play comes to a quiet close as Elizabeth seems to come to terms with Roy’s shortcomings, pledging continuing devotion to him in absentia – although exactly why remains frustratingly unexplained.

The other side of the love story comes after intermission as we find the wasted Roy (Daniel Nieves) in a back alley drinking as much beer as possible with his adoring younger brother Ray (Kristian Bikic). In operatic arias, Roy rages at fate and longs for his pre-Vietnam past when he was king of the town, addicted to binges of sex and booze. But he has been unable to get his feet on the ground since returning home and has been trying to recapture it with the kind alcoholic sprees he once indulged in. Under all that self-destructive behavior, he knows the only good thing in his life is Elizabeth. Which does not gel with what McLure told us in the preceding play.

The brothers banter in more broadly comic bits, such as arguments with that kind of comic fixation that drunks have about minutiae such as an extended debate on the proper order in which to drink a beer, eat a Baby Ruth candy bar and chomp on salty popcorn.

Roy’s problems are about to be complicated by Amy Lee’s husband Curtis (Juan Gamero) who remains the wimpy punching dummy who Roy cruelly bullied in high school and since. Suffice it to say that Curtis is about to ensure that Roy’s pride and joy (and substitute manhood) is about to take a beating that he may not recover from.

In both pieces, the protagonists are yearning for something that they know they cannot recapture and searching a clear path forward. Elizabeth is going to be a lot more successful, it seems, than Roy.

The two plots do not occur on the same day because there is a line about Ray having taken Elizabeth home from the bar and Roy makes no mention of his disappearance nor his adulterous companion.

McLure, who died in 2011, had a cult following and Acevedo is a major fan of his writing. Oddly, Lone Star was more widely produced after its solo bow in 1979. Laundry & Bourbon, joined with it in a 1980 production called 1959 Pink Thunderbird, is lesser known but seems a far more nuanced script.

Bovino is perfectly adequate and Ramirez (who was fine in GableStage’s The Motherf**ker With The Hat) does a solid job as the wistful abandoned wife.

But it’s Zeller who shines brightest. Yes, she has the best-written part of the entire show with more than her share of witty rejoinders. But her comic timing is craftsman-perfect and her reveries about her lost love are quietly affecting. She just gets better with every role, each time stretching herself just a bit more. It’s hard to recognize her conventional well-adjusted Hattie from the world-broken barfly in Alliance’s Savage In Limbo last year. Her Hattie is smart enough to slyly sidestep accusations of being cruel to Amy Lee. Zeller gives a knowing topspin to the line, “I’m neighborly, just not friendly.”

Nieves has the strongest part in Lone Star, but McLure really only gives him a couple of emotions to play and Nieves doesn’t add any others, although he certainly delivers what’s written with brio and energy. Bikic is adept at being the straight man and he has a daffy way with such situations as when Roy is about to hit him with a two-by-four and Ray says with complete sincerity, “Please don’t kill me. If you kill me, I don’t know what I’ll do.” Gamero was so mush-mouthed that most of his dialogue was unintelligible.

Having lived myself in Oklahoma and known many Texans, I can attest to admirable job that most of the cast did with the accents, especially the women who voices twang like banjo strings.

Praise is due to Howard Ferré whose choice of 1960s country-rock standards playing behind the scenes is absolutely dead perfect, not just for the steel guitar sound but for the choice resonating lyrics of The Eagles and others.

In the end, the guys are just mildly interesting, but the women are steel cacti.