Attention must be paid, to steal a line, and Avi Hoffman is ensuring that proper homage is paid to Joe Papp, the visionary who intersected art and community by making theater accessible to the general public in comprehensibility, neighborhood performances and free admission.

Adapted directly from extensive research of Papp’s own words in interviews and a concert that Papp sang in 1978, Hoffman and colleagues have created the tribute, Joe Papp at the Ballroom, a world premiere playing a limited run at GableStage.

The one-man show honors the man who created Shakespeare in Central Park and the Public Theater, which championed a phalanx of up-and-coming playwrights and actors.

This clear labor of love powered by Hoffman’s passion is a strange collision of what seems to be two separate pieces of theater.

For the first 15 minutes, Hoffman and musical director Phil Hinton recreate Papp’s unusual cabaret set based on a tape loaned by his daughter. A natty Hoffman comes on in tux and top hat clasping a white tipped cane. He then intersperses gently humorous stories of his youth with carefully chosen period numbers like “Brother, Can You Spare a Dime,” Irving Berlin standards as well as some Yiddish numbers – all delivered with inventive and emotional interpretations. But that’s just a jumping off point.

He disappears behind the white stage curtain. A minute later it opens on a recreation of Papp’s office in the Public Theater. Papp re-enters, stogie in mouth, in a blue sport jacket, polo shirt and white tennis shoes.

And for another hour, he really tells the story of his professional life deftly interpolating snatches of songs from shows he produced and speeches from Shakespeare.

For instance, he talks how his first street production was The Merchant of Venice, which resulted in criticism that the play was anti-Semitic. That prompted Papp to publicly emphasize that he was Jewish. Papp/Hoffman then launches smoothly into a naturalistic “Hath not a Jew eyes?” speech.

The first section has a presentational almost vaudeville feel to it. But the second is theatrical storytelling, well-crafted by Hoffman, director Eleanor Reissa and Susan Papp-Lippman, one of the maestro’s children. Hoffman’s performance deepens and deepens as he tells story after story punctuated with aphorisms and Aesop-like morals: “Illusions must be maintained at all costs.”

More introspection than bragging, Papp tells a score of tales such as refusing a $50,000 National Endowment of the Arts grant when it required him to pledge that none of the government’s money would be used for works that might be deemed “obscene” and without artistic merit – a controversy sparked by the Robert Mapplethorpe exhibit in Cincinnati.

The concert facet may have been the crucial impetus to the initial creation of the project, but the truth is it’s just not necessary and it’s stylistically in another play. As a brief and never repeated interlude in Papp’s life story, the section is mildly intriguing and, of course, thoroughly entertaining in Hoffman and Hinton’s hands. But the biographical and thematic points could have been infused into the body of the second part of the show.

At its core, Ballroom is another “and-then-I-wrote” biographical reverie as someone is about to enter the pearly gates. But thanks to Hoffman and the script, it rarely feels like someone is checking off the boxes on a list. Instead, the stories serve both as a tour of American theater in the second half of the 20th Century as well as insights into the character of the man who helped mold it.

Hoffman knew Papp because his mother, the educator Miriam Hoffman, had interviewed Papp. When the woman wrote part of the Yiddish musical Songs of Paradise, Papp produced it in 1989 – featuring both Avi Hoffman and this show’s director.

When Avi Hoffman, a devotee of Papp’s work and career, came upon the Ballroom tape, he developed it into a near transcription concert a few years ago. Then with Reissa, they developed this work.

His drive is addressing his fear that Papp’s achievements in American theater may be fading in the popular consciousness since his passing in 1991. Indeed, Papp’s legacy is massive: producing major hits like Hair and A Chorus Line, championing the workshop paradigm for developing shows, favoring plays with a social conscious message, and moving plays from off-Broadway to Broadway.

As the fulcrum on stage, the beloved Avi is a bit like Gary Cooper. He has always been a fine actor, effectively plumbing a wide range of emotions and even styles from musical comedy such as his joke-vending husband in Hairspray to profound drama such as his acclaimed Willy Loman in the Yiddish language Death of a Salesman. But like Cooper, his innate charisma and persona in performance remains inescapably his own. It doesn’t help that he neither looks or really sounds like Papp, but fortunately 90 percent of his audience won’t know that.

What the two do share, what Hoffman virtually radiates throughout, is his and Papp’s love – true love — of Theater, love of Shakespeare, love of the social justice, love of serving the community by making art easily accessible. There is such fervor in Hoffman’s every moment whether caressing every syllable of a song in Yiddish, clearly savoring the still relevant resonating wisdom of the Bard or uttering Papp’s observations that theater should be free just like public education and the library.

While a work of admiration, the ending of the show has Papp acknowledge he had flaws, specifically noting that he had four wives and five children to whom he suspects he was not an outstanding father.

A nod to the set design Lauren Helpern’s set design of the office including a wall with posters from most of Papp’s famous productions.

Bio-musicals and bio-plays are not everyone’s cup of tea, and this is no different. But Hoffman’s is infectious and inspiring.

The production is the second in GableStage’s new season under new producing artistic director Bari Newport. The show is co-produced by YI Love Jewish, part of the Yiddishkayt Initiative Inc., a non-profit promoting Jewish history, life and culture that Hoffman founded.

Side note: In the hope of selling tickets to people who are not comfortable being in the theater auditorium yet, the show will be streamed beginning through Dec. 31 at the regular show time each night (not on demand). The cost is the same cost of a ticket for the show in the auditorium. 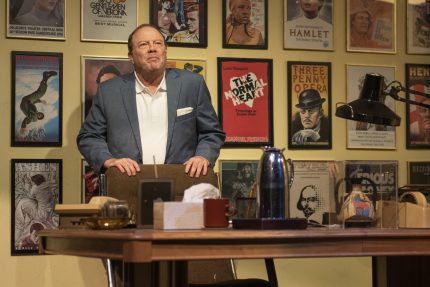