Posted on September 5, 2022 by Bill Hirschman 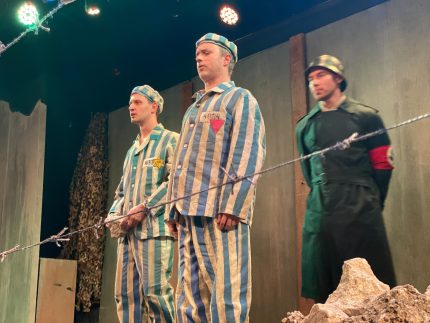 “I don’t stick my neck out for anybody.,”
–Rick Blaine in Casablanca

To be sure, Martin Sherman’s 1979 shattering Bent deserves full honor for putting recognizable complex human beings amid Hitler’s murderous decimation of homosexuals during the Holocaust – and re-reminding the general public of this horror not often discussed in much depth in straight society.

And, yes, given the rising resurgence of rabid homophobia in the last few years in this country, it is crucial that we never forget that this bottomless tragedy is not some academic abstraction.

But rising beyond the gender topicality of Sherman’s script in Empire Stage’s uneven, but ultimately scorching production are universal issues: the nature of human beings under extreme peril, and the challenge of opening yourself to basic humanity in such times.

Or more on a razor-sharp point: What do you do or not do when lethal evil targets you and those you love? And what does that say about who you are?

Director, set and costume designer Larry Buzzeo’s fervent passion for this piece is imbued throughout this low-budget production that nevertheless injects the audience directly inside the nightmare in this living-room intimate venue. His “man on a mission” zeal is shared by his entire band of artists.

To be fair, some passages land more affectingly than others; some can’t escape the sense of actors acting a scene. But many moments stab deep inside you as the narrative noose tightens towards the breath-stopping last few scenes.

Buzzeo has slightly rearranged the order of the early scenes to open his production with a depiction of a debauched gay club in 1934 Germany that gets a little more imaginative expansion than in Sherman’s script. Think the film Cabaret.

Two men are snuggling in pure lust. A large man dressed as a middle-class hausfrau talks with the club owner. An attractive man garbed primarily in pants and suspenders performs a jaunty song and dance in heels. The drag queen Greta (Buzzeo again) trades his initial black shoulder-length wig for a blazing red one and dons a sparkling green gown to serenade the crowd – the only aspect actually in Sherman’s script and which normally occurs later.

The next morning in a rundown apartment, the dancer Rudy (Ben Shaevitz) is waking his roommate, Max (Matthew Salas) who cannot remember much of the drunken, cocaine-laced evening where he had been coupling with the hot, muscular Wolf (Craig Moody) – who himself stumbles into the living room dressed in a jock strap and socks.

Max and Rudy have a relationship of some sort. But whereas the needy Rudy clearly loves Max, his partner is a self-centered sybarite confident in his ability to get people to invest in schemes of any kind, integrity notwithstanding, whether it be selling cocaine or anything else. Still, he genuinely appreciates Rudy’s worship.

The ensuing somewhat longer-than-needed scene of domestic bickering comes to a sudden halt when stormtroopers invade the room to arrest Wolf – and slit his throat. Wolf was connected to the Ernest Rohm supporters who were wiped out on Hitler’s command in the legendary Night of the Long Knives.

And the swirling descent begins. The terrified couple go on the run, although Rudy protests with the puzzlement so many expressed, “But I live here!” Max and Rudy seek help from Greta who turns out to be a bottomless pragmatist with a wife and children, and who will inform on anyone for money and protection. But after he removes his curly wig, revealing a tight Aryan blond haircut, we see the Bent director has dropped a swastika armband among Greta’s makeup on his dressing table. Although uber-expedient, Greta reluctantly weakens and gives the men money to leave Berlin, fully expecting to rue his gesture.

The couple begin a two-year escape throughout Germany, seeking money to leave the country and get fake identity papers from an uncle. But the uncle (assistant director Chris Ruggere) only offers papers for Max. But Max turns down the offer because he can’t get another set for Rudy. Max may not even understand his gesture because it is so unlike him, but it tells the audience that he cares more for Rudy than he realizes. Later, the two are discovered by the SS and arrested.

In the first of a handful of key character-testing crucibles, they are on a train headed for Dachau. Confronted by uniformed sadists, Rudy is singled out for bullying then torture. Max pretends he does not know Rudy (three times as did apostle Peter). He is threatened with torture if he does not beat Rudy. He complies and Rudy dies. A quick note: The sounds of the offstage beating usually don’t sound realistic in most theater productions. Here, the screams and thuds sound all too realistic.

In the concentration camp, Max meets the withdrawn prisoner Horst (Seth Trucks) who knows the realities of the place. When dealmaker Max tries to connect with him as a resource, Horst notes “Friendships here last 12 hours.” Indeed, survival means surrendering caring; humanity must be kept at arms-length.

But Max, the incurable wheeler-dealer, manages to get assigned to the most insane but safest duty – moving a pile of rocks from one end of the yard to the other and then moving them back, over and over in a circular cycle designed to drive the participants crazy with its intentional pointlessness.

Meanwhile Max has managed to get Horst assigned to the task that the audience watches through an electrified barbed wire fence. Horst, who wears the infamous upside-down pink triangle, at first despises Max who has lied and wears the yellow star of Jews because Max says “pink is the worst” – spurning and denying his sexual identity. Under Horst’s persistent questioning, Max details the horrifying act required for him to disprove his sexuality, a truly stunning segment that reveals there are no depths to which he will not sink for self-preservation.

In tableau after tableau of mindless rock moving, we see the men combative at first. But in a key scene, the men are forced standing at attention in the pitiless sun. In view of the guards, the two assuage each other with murmured words that parallel love-making. Buzzeo, Salas and Tricks make this an intense and verbally graphic tour de force of forbidden love in more than one sense.

The continuing relations test each man’s previous commitment to not caring about anyone or anything but survival. But there are ultimate tests ahead.

Salas is not engaging when portraying the user-fixer aspect of Max, hampered because Max the human being is submerged. But under Buzzeo’s guidance, Salas rips into the audience’s sympathies when Max collapses each time a situation thrusts him before an inescapable mirror of his character. Salas – eyes consumed with pain and mouth twisted in self-loathing — succeeds in creating the Max who sees that he has spent his life trying to escape connecting with people as human beings, and that he has an ultimate responsibility toward humanity.

The veteran Trucks delivers one of his best performances ever charting the evolution of the soul-scarred Horst whose yearning for humanity scratches and scrapes through a shell of self-preservation.

As Greta, Buzzeo (who ironically has played Frank-N-Furter) also scores with creating a multi-leveled creature. His Greta feels perfectly at home indulging whatever excesses his club requires, but who deep down is simply the ultimate opportunist.

The production is not always enthralling; the early scenes of outré gay life in Berlin seems staged as if the production is showing off its artistic freedom to throw away any restrictions. But one could argue that it’s an intentional contrast to what is to come.

A quick shout out is due sound designer David Hart who layers in the sounds of marching boots, warning sirens, gunshots, beatings, German period songs and I think the sound of falling rocks in blackouts.

Buzzeo has done a fine job staging the production physically, especially given the limitations of the budget. But his work truly succeeds in eliciting the agony of Max and the contained struggle inside Horst.

Parking note: The railroad recently put up no-parking signs along their property, which begins just past the tree line across from the theater. You may still park there if you’d like. However, you now need to park parallel to the road (as opposed to perpendicular) so as not to encroach on the railroad’s property. The best place to park when visiting Empire Stage is along the front of the building or anywhere in the parking lot, which is located on the south side of the building. There is also additional street parking along the building on NE 8th Ave (just past parking lot).

One Response to Bent’s Horrors Go Beyond Homicidal Homophobia; Asks What Would You Do If Targeted