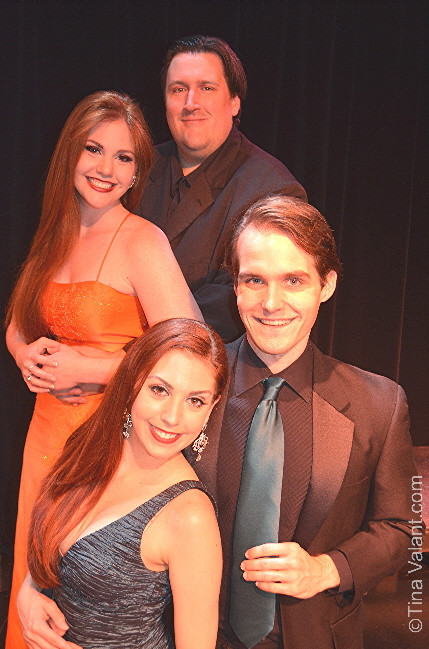 The musical revue Bernstein on Broadway at The Plaza Theatre is a bouncy bauble that achieves exactly what it aims to: deliver a diverting and entertaining summer evening.

It doesn’t thrill or wow or provoke great ruminations on the skill of one of the most eclectic American composers of the 20th Century.

It’s like one of those pleasant summer pops concerts emanating from a riverside bandshell on a verdant lawn in the municipal park – it just happens to be staged inside a theater.

Performers Clay Cartland, Lindsey Johr and Leah Sessa with musical director Mark Galsky on piano lead the audience on a gentle and comic stroll through a songbook that draws heavily from On The Town, Wonderful Town, Candide and, of course, West Side Story.

Some of the two-dozen-plus numbers are so iconic that a few audience members struggled to restrain themselves opening night from singing along. Others are little known but equally lovely, notably numbers written for a little-remembered 1950 version of Peter Pan with Jean Arthur and Boris Karloff – not the 1954 Jule Styne edition written for Mary Martin.

All the singers have serviceable voices, but what makes their delivery land is that director Amy London has encouraged them to infuse emotion into their performances of some songs and to have fun with others so that the audience is engaged. There’s no dry concert feel that so many revues have of “and then he wrote.”

For instance, one of the toughest coloratura songs in the musical theater canon is “Glitter and Be Gay” from Candide, recognizable from the main theme for the old Dick Cavett TV show. Johr has a solid soprano, but this is a challenge for the best voices in the profession – a signature song for Barbara Cook and Kristin Chenoweth. So while Johr does a respectable job with the killer vocal demands, London embellishes the number by having Johr uninhibitedly embrace the character’s persona – a vain, shallow and greedy airhead whose better nature is derailed every time she sees the copious jewelry adorning her evening gown.

Similarly, Sessa has a marvelous voice that caresses lovely ballads and nails the poignancy of West Side Story’s “Tonight” with Cartland. But she unleashes a delightful kookiness in her comic renditions of “I Can Cook Too” from On The Town and “One Hundred Easy Ways To Lose A Man” from Wonderful Town.

Cartland certainly can sing as evidenced in his rendition of such heartfelt numbers as “Maria,” although he can’t make “Pass The Football” from Wonderful Town sound melodic. What Cartland does add is a crucial sense of fun to the whole evening. His gently witty introductions to songs and his playing with the audience give the evening a welcome lightness. He and London have developed the interstitial monologues: The plaintive “Why-oh-why-oh-why-oh / Did I ever leave Ohio” duet by the women from Wonderful Town is too good an opportunity for him to pass up on a few references to LeBron James.

Most of the numbers don’t really illustrate Bernstein’s prodigious versatility even in his stage performance pieces. He composed virtual nightclub skits and unusually ambitious works such as Mass. But the Plaza show underscores how this composer of ballets and mini-operas could bend his talents into the familiar tropes of Broadway musicals.

A little work still needs to be done here. Several songs just meander off at the end without a button – the musical equivalent of a period at the end of a sentence. The singers and Galsky weren’t always as tight together as they might be. Some top notes were a little thin. But a few days should iron out most of those patches.

Overall, the audience gets a smooth cool quaff of refreshing summer lemonade.