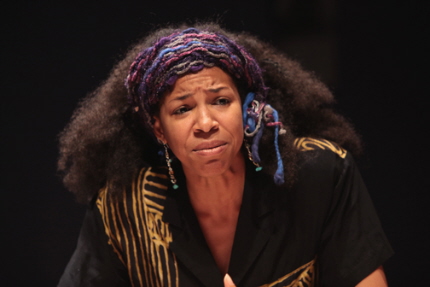 One pleasure being a longtime theatergoer is seeing a veteran but chronically ill-used actor finally get the role she deserves and watching her nail it.

M Ensemble’s production of The Gift Horse has praiseworthy virtues and crippling problems that make it a mixed experience. But it does give the audience a long-delayed gift in Carey Brianna Hart’s scintillating, poignant performance as a witty but troubled woman seeking true love.

Over the years, Hart has been cast in roles not worthy of her, roles that weren’t right for her, directors who haven’t elicited her best work, productions that to put it politely were weak and amateurish. Yet, you saw flashes of her talent and skill when someone gave her meaty material such as in Thinking Cap Theatre’s success last year, Church.

Finally, she has Ruth, the droll, damaged heroine given impassioned and insightful observations via playwright Lydia R. Diamond in this tale about the joy and pain of relationships among intelligent and sensitive human beings.

Hart and Diamond construct a penny-bright Ruth who charms the audience with a playful joie de vivre linked with a razor-sharp mind and who delights in storytelling. Hart has a slight lisp but in this role it makes Ruth all the more endearing, even imbuing a subconscious vulnerability. All three women fuse to make for delightful company to carry us through the 2 ½-hour show.

Her Ruth chuckles and grins as unconventionally as her Afro tied in a topknot that emerges like a follicle fireworks. But just underneath Ruth’s spunk and spirit you can barely see something isn’t sitting quite right.

It’s much more than an African-America riff following the loves and losses of an modern urban woman. Diamond, who wrote the acclaimed Stick Fly, digs far deeper into the heart and soul that that in this earlier work from 2002. In fact, while culture and ethnicity are woven into the fabric of the evening, the issues being examined are too universal to pigeonhole this as “a black play.”

The play opens with Jordan (Janice Giselle Muller), a beautiful and wry young woman, playing a soulful piece on her violin. She will be a mystery through much of the play and her story seemingly occurs on a completely different track. But her musings to the audience about what it means to be a cultured, intelligent, artistically talented woman in the 21st Century resonates with the struggles that Ruth is going through.

Then we meet our narrator Ruth who relates her college days when she abandoned plans in art to be an educator. She becomes roommates with the wise and supportive Ernesto (Andy Barbosa). They will be lifelong soulmates as he pursues love with the unfaithful Bill and the nearly perfect Noah (both played by Othon Cardelle). For all her wit and bonhomie, Ruth has deep emotional issues which she starts to address with the psychiatrist Brian (André L. Gainey). Handsome, compassionate and as even-tempered as Ruth is mercurial, Brian helps her with part of her emotional baggage. When they meet again post-treatment, they act on the love that burgeoned during their session and eventually marry. But as much as Ruth yearns for fairy tale endings and movie-worthy relationships, neither she nor Ernesto are fated for smooth rides.

A major asset is Diamond’s compassionate, insightful and downright funny voice that can be heard not just in Ruth but in all of the characters. Although it can be intentionally prosaic and frequently embraces the joy of sex, it also can border on poetry festooned with metaphors and analogies. But above all, it exudes that love of storytelling mixed with an intellectual surgeon’s fascination in excavating the Byzantine pathways and switchbacks in human yearnings for affirming love in all its permutations.

The Gift Horse is a highly-theatrical play that enjoys slipping fluidly across past, present and future. Most characters talk directly to the audience, even talk to each other when they are in different scenes occurring at the same time. Director Lowell Williams understands what Diamond wants and stages that almost metaphysical quality with fidelity.

But that flow and the production are fatally undercut by several elements. The lighting design by Ron Burns seems fine, but the show is sabotaged by some of the worst execution of lighting cues we have ever seen: Unplanned blackouts, lights coming up way too late on someone in a dark part of the stage who is already speaking, lights remaining on people after their part of the scene was over, on and on and on. We have no way of knowing whether this was human error or technical problems. But it is so distracting that the audience cannot focus on what is being said. It needs to be fixed immediately.

Second, Gainey, who has delivered memorable work as offbeat sidekicks in King Hedley II and Fences, always has had a molasses measured vocal delivery. Here, the phlegmatic speech slows down Williams and Hart’s attempts to build a reasonable rhythm for the narrative arc that Diamond wrought.

There are other problems as well, but a story that should flow like a river is a herky-jerky hayride and a lot of plot points that require close attention get a bit lost. You only pick them up when they are referenced in dialogue late in the next scene. The dots are not easily connected

Also, while this production does not land as sharply and solidly as it has the potential to do, the script is due some of the blame. As beautifully as Diamond writes, the play thematically seems to cover so many topics that it’s hard to get your arms around them all with some unifying concept. As a result, the ultimate meaning of the play drifts just out of reach, even on reflection the next day. That makes it a tad long without a central core for the audience to relate to. It is so densely-packed with ideas and issues that you almost wish to see it again or read the script to catch it all.

The other performances are all over the Mapquest. Violinist/actress Muller is enchanting as the commenting Greek chorus whose observations have a self-possessed sass and sweetness informed by a native intelligence and a wry poker-faced wit.

Barbosa was impressive last year as the troubled adolescent son in Nilo Cruz’s Hurricane. Here, he convincingly pours angsty passion in the loyal, lonely friend. But, and forgive this Anglo, I don’t remember him having such a difficult time in Hurricane enunciating clearly. Here, the accent we assume he has adopted for Ernesto is quite thick. This has good and bad consequences. On one hand, you have to work hard to understand what he is saying about a third of the night; the good is that you have to focus closely on the emotionally rich ideas that Diamond is having him utter. But he always lives in the moment and feels true at all times with a voice that is quick with a laugh or quavers with emotion.

Cardelle, a relatively young actor still learning his craft, is less effective and Williams needs to push Gainey to move outside his always mellow comfort zone.

That carping aside, if the overall production isn ‘t perfect, this may rank as one of the best M Ensemble has delivered in quite some time. And fans of Hart have reason to rejoice.