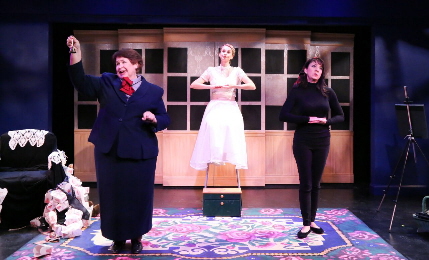 Elizabeth Dimon, Betsy Graver and Niki Fridh find another reason not to leave home in the world premiere of The Three Sisters of Weehawken by Deborah Zoe Laufer at Theatre Lab / Photo by Viviana Puga

It sounds like an absurdist’s theater joke: So Anton Chekhov and Samuel Beckett walk into a bar….

But while Deborah Zoe Laufer’s world premiere The Three Sisters of Weekhawken is, indeed, funny in its daffy way, this imaginative mashup of Chekhov’s meditation on yearning refracted through Beckett’s existentialism and a shred of Neil Simon has a serious and eventually moving moral about the perils of paralyzing procrastination.

The central tableau, repeated over and over and over and over in this production at Theatre Lab at FAU, is of Laufer’s three sisters in a suburban New Jersey burg sighing dramatically every time they recall their original home in New York with the exclamation “Manhattan!” The scene, of course, lampoons Chekhov’s ladies heaving with the same aural ecstasy at the mention of Moscow.

And it’s no spoiler that for 90 minutes they may come close to leaving the insulated Garden State homestead, but they always finds excuses and rationalizations, so that they stay as stationary as Beckett’s Vladimir and Estragon.

The difference is that Beckett’s tramps were simply waiting for a meaning in their lives that never arrives. Laufer’s 20th Century Olga, Irina and Masha always have a choice, scene after scene as the play skips across 58 years. But changes, risk, life itself terrifies them. And if this leaves them with a very Beckett-like bleak existence of compounding surreal absurdities, Laufer is laying out a cautionary tale of the price of perpetually allowing fear to block human beings from living full (if meaningless) lives. It is an existential wasteland of their own making.

The play occurs completely in the sitting room of Olga (Elizabeth Dimon), the stolid solid hardworking teacher; Masha (Niki Fridh), an affected painter who dresses totally in black, and the ethereal Irina (Betsy Graver), the youngest who dances around the house calling herself “the pretty one.”

The absurdist vibe runs rampant. Masha paints hundreds of identical portraits of Irina that are just completely black canvases. Olga, who loses her teaching job for stealing a student’s Ritalin, blankets her portion of the house and herself with empty Chinese takeout containers and stuffed animals she lifted from the school – conjuring images of Beckett’s Winnie in Happy Days.

The play opens in 1958 when the women are in their 20s. Over 58 years and seven time periods, they keep dreaming aloud of returning to The Big Apple gleaming across the water, a ferry ride away. Just as with Waiting For Godot, it’s not fair to say that nothing happens. It’s just nothing comes of it as the self-destructive sisters aver that they yearn for a new life in Manhattan, make plans to move there and then find excuse after excuse, rationalization after rationalization to put it off until “tomorrow.” In fact, what happens is the audience grows increasingly frustrated (as does Irina) with the chronic evasions.

In one segment, loving loyal sister-in-law Natasha (Jessica Farr), Laufer’s emissary from the outside world, had promised to take them to an art gallery opening for Marsha’s paintings. But she never returns for some reason. Olga is relieved and says, “Maybe if we sit here and wait, patiently, maybe she’ll still come. I find that sometimes, if you don’t do anything, things just work out.” We and she know that’s not true.

But Irina is aware, as the audience is, of inevitable mortality running out the clock on their dreams: “Even if we do absolutely nothing.  It will happen. Life will get used up.”

Don’t mock them: How many of us have isolated ourselves in electronic silos of our own making?

While Laufer laces the evening with humor – the sisters cluelessly keep ringing for a servant who has been long dead – she sees this as a poignant tragedy as the sisters’ lives iris down to nothingness in a moving finale. I’m not quite sure exactly how to interpret the very last tableau but it will make for some spirited discussions on the car trip home.

The play has some resonances with Laufer’s offbeat sensibilities seen in other plays she has premiered in the region at the late Florida Stage such as End Days (with Dimon) under the helm of Louis Tyrrell who now run Theatre Lab. She has deftly mimicked both the affected cadences of Chekhov’s characters and the banal simplicity of Beckett’s denizens.

As a world premiere – the first time Lauder has directed her own work – the piece would benefit from another pass through the word processor. As capable as her cast may be investing life and variety in the lifeless and unvarying, there is only so much repetitive stasis that an audience can handle before they silently scream, “I get it.” Slicing about five to ten minutes might be an option to try.

But it’s difficult to overstate how all four actresses under Laufer’s direction make this not only bearable but fascinating. Dimon, of course, is a past master at finding the truth under the wacky behavior of surreal characters as well as impeccable comic timing. Fridh and Farr are fine. Graver reminds us, once again, what a skilled actress she is, going from Irina’s naïve flightiness of a sheltered youth in the opening scenes, to the growing panic and frustration in the middle, to the delicate poignancy of an elderly woman in the final moments.

Only a few Florida theaters outside of colleges mount Beckett let alone Chekhov, so it will take local audiences a little effort to get in sync with the sensibilities.

The Three Sisters of Weehawken is not a play you will like; it asks a fidgety audience to put up with these women’s foibles too often and too long. But it is a highly successful offering designed to make you think about whether you are wasting your own life.

Side note 1: Theatre Lab is a professional company based at Florida Atlantic University, which opened last season with a series of staged readings including this play. This season opener marks the first season of fully-staged works. Over the summer, the bare bones facility was improved including new seating on risers, a sound and light booth and wings for the stage.

Side Note 2: In the pre-show cellphone announcement, Associate Artistic Director Matt Stabile makes an interesting note regarding turning the phones off completely: Even in silent mode, most phones audibly ring loudly for Amber Alerts and severe weather warnings.

The Three Sisters of Weehawken from Theatre Lab runs through Nov. 6 on the first floor of Parliament Hall, FAU Boca Raton campus, 777 Glades Road. Performances are Thursday through Saturday at 7:30 p.m., and Sunday and Saturday, Nov. 5, at 3 p.m. Running time about 90 minutes with no intermission. Tickets are $35, and $10 (cash only) for students, faculty and staff with ID at the door. Call 561-297-6124, visit the FAU Box Office or https://www.fauevents.com. Tickets available at the door upon availability.