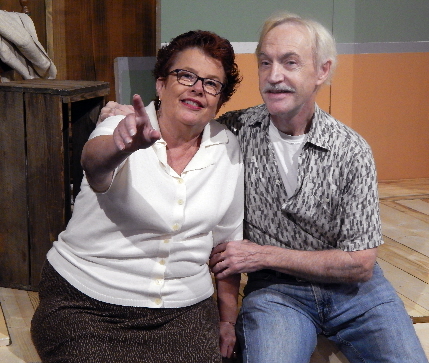 Larry Parr’s Invasion of Privacy, based on a lawsuit against Florida’s beloved Marjorie Kinnan Rawlings, lays intriguing thought-provoking ideas on the table, but basically just leaves them there.

Although Pigs Do Fly Productions’ edition is blessed by the standout performance by Missy McArdle as the author of The Yearling, the unfailingly earnest effort by all involved almost never rings true.

The key conflict is at the center of a 1943 suit brought by a neighbor Zelma Cason for being depicted as a quirky spinster in the non-fiction classic Cross Creek. Cason’s injured feelings are championed by local lawyer Kate Walton to further her personal crusade against invasion of privacy – an issue that had not been argued in Florida at the time.

But the Pulitzer Prize-winner feels that artists have a right and a duty to accurately tell the truth of what they see and feel. Just as fundamentally, her attorney Sigsbee Scruggs sees the suit as an incursion of Rawlings’s First Amendment right to freedom of speech.

These clashing interests are laid out in discussions on Rawlings’ front porch in the first act and litigated in court in the second in what Parr may have hoped echoed Inherit The Wind with the audience being the real jury.

Exploring the potential facets is indeed worthy of an issues-oriented problem play. But all the script does for two hours is depict a straight ahead head-on collision in which each position can be summed up in a single sentence. It’s not that Parr needed to favor one side or even resolve the controversy. But a more incisive exploration would have been welcome in this play that has had several productions dating back at least to 1999. To be fair, Law & Order often does exactly the same thing, but you still feel its clashing sides has more nuance and delves more deeply.

Parr also throws in two other issues worth examining but which are just laid out there. First is the unvarnished sexism endemic to the period. Walton is the one of the first women attorneys in Florida and she is subjected throughout with bemused condescension and during one court recess to moustache-twirling sexual harassment from Scruggs. Rawlings, too, has to remind Scruggs and her husband, Norton, that she’s a player not a bystander when decisions are being made.

Second is the deep resentment that the locals feel against carpetbaggers despoiling their way of life, even though Rawlings says she was born and raised a Southerner (turn-of-the-century Washington, D.C.). The irony is that Rawlings felt she had come home when she arrived in Cross Creek, had joyously integrated herself into the community and, furthermore, that her books actually venerate the land and its people.

This script in other productions has received some admiring reviews and it does read somewhat better than it plays here. One problem that the cast and director Peter J. Loewy never overcome is that Parr’s mixture of serious issues isn’t just leavened by character-based humor but deeply undercut by broad or simple characterizations that often border on cartoons.

Zelma is a plain, unsophisticated, uneducated backcountry denizen who Rawlings swears she never meant to make fun of or demean – which is far more than Parr, Loewy and actress Pepper Thompson can say. Their creation is more Mammy Yokum from Dogpatch than Ma Joad.

That said, Parr writes lyrically when he has the anguished Rawlings baring her soul. A victim of depression relieved only by heavy drinking, Rawlings tells Norton, “I wish I could make you understand.  It’s like a black, cosmic despair.  Like a sadness so deep and broad, it can’t have originated in me.  Like it gathered together from the far reaches of the universe and chose me to settle in.  Only I’m too small to hold it.”

Or often, she speaks of the need for a writer to have the freedom to express herself and writing’s centrality in her life: “Look, a spiritual hand guided me here to Cross Creek to write about these people.  Well, maybe that same hand guided me to fight for freedom of speech.  Maybe this is the highest purpose of my life.”

As one-dimensional as the rest of the characters are written, Parr does a fine job creating the complex Rawlings – and he is given a gift to have McArdle bring her to life with passion and honesty. McArdle is better known these days for her supporting roles in musicals, but she has a long local history of tackling tough leads in dramatic pieces and that experience shows here.

McArdle creates a Rawlings who seems like your friendly, sharp-witted but unprepossessing neighbor, not a character in a play. Her Rawlings is even a bit shy and tentative about most things – except her love of writing and the bucolic backwoods. She wins you over quickly as the controversy invades her own privacy and keeps you in her corner even when you have to admit that the plaintiff does have a point of view worth considering.

The rest of the cast is terribly uneven throughout the evening (other than Thompson’s consistently cartoonish Zelma): Kevin Reilley as the ineffectual husband, Norton; Todd Caster as defense attorney, loyal friend and sexist pig Scruggs; Julie Pisano as the forthright Walton, and Kerry Sensenbach as the judge.

For the past two years, Pigs Do Fly has specialized in short plays written by, performed by and about people over 50 years old. Each production is slightly better than the last, although they always seem to be shooting just a bit beyond what they have the capability of pulling off.  Continuing this admirably ambitious attitude, this production marks its first foray into a full-length play and every aspect is again better than the previous outing. And once again, it’s just a bit beyond what they can land convincingly.

To be clear: Neither the production nor the script are terrible, just frustratingly simplistic and ham-handed other than McArdle’s work. You yearn for more.