Communion Exists In More Than One Sense At Primal Forces 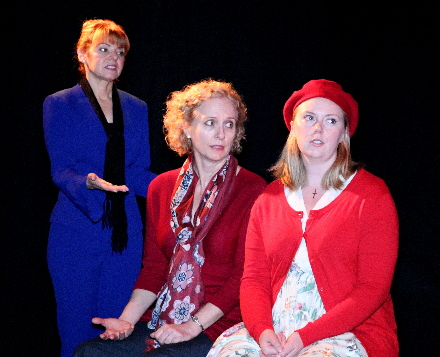 Spurred by mortality, human beings struggling to repair connections as conduits toward understanding their lives form the crux of Primal Force’s intimate exploration of relationships in the intriguing Communion.

A flawed mother dying of cancer, her estranged born-again daughter and a therapist with her own problems dance emotionally prickly pas de deuxs in this incisively acted and directed 2010 chamber play by Canadian playwright Daniel MacIvor.

It’s the kind of play that stays with an audience after the curtain calls because while individual aspects land solidly, the overall unifying themes are just loose enough to force patrons to mull questions for hours afterward. But swirling around are mother-daughter relationships, death, religion, spirituality, sexuality, self-reliance, recovery both physical and emotional and likely a few other topics as well. The play may be more about asking open-ended questions than suggesting satisfying answers.

This tiny Broward company that has moved around a bit makes the most of the Empire Stage’s livingroom-size theater in Fort Lauderdale by putting the audience in the same room – literally – with the protagonists. It allows the audience to see the subtle facial reactions that the actresses and director Keith Garsson have choreographed as well as the occasional operatic outbursts.

Three scenes play in a space sparsely furnished with a few pieces of stylish transparent plastic furniture. The first finds Leda (Kim Ostrenko), a middle-aged woman in a therapy session with the imperturbably calm Carolyn (Jacqueline Laggy). Facts tumble out to the audience as the hyper-articulate, ever more anxious Leda reveals that she is dying of cancer and feels a crushing need to reconcile with her profoundly-alienated daughter, Ann. Anyone who has undergone therapy of any kind will recognize the paradigm in which the therapist mostly asks questions rather than providing specific advice and solutions that the client desperately seeks.

But Leda’s ramping anxiety pushes her through a decision to reveal her diagnosis to daughter Ann (Jenna Wyatt), a former wild child now a fundamentalist Christian once imprisoned for burning down an abortion clinic. The extent of their estrangement becomes clear: Leda was a rotten mother on the losing end of chronic alcoholism for most of her adult life including the child-rearing years. She also is an atheist. The byproducts of decades of anger and guilt emerge in several revelations that show how little they have chosen to stay connected.

The third act has Ann and Carolyn meet after Leda has died and the disenchanted therapist is closing up shop. Their conversations reveal how little each knew about the real Leda. But in each conversation in all three scenes, we see different sides of the characters in their interaction with the other person.

The plot does not reflect the strengths of the evening. Among them are the nuanced performances from two veterans and one newcomer molded by Garsson: a superb Ostrenko who creates an intellectually irreverent Leda more troubled by unfinished personal business than imminent death; Laggy whose Carolyn has a frustratingly even demeanor covering a troubled soul that frays later in the play, and Wyatt whose Ann has been so badly hurt by her mother that she has no Christian forgiveness easily available.

The other asset is the writing. The much honored MacIvor – known in his native country for off-the-wall work – has a facility for witty acerbic speeches and retorts drenched in yearning.

Recalling her childhood in the Catholic Church, Leda describes communion: “You were supposed to be praying, but… and this is back in the day when the priest would put the host thing right on your tongue. Like it was so holy you weren’t allowed to touch it.…Everybody would look different after. They’d get their communion and as they were walking away they looked… different. Peaceful. Holy. Like something touched them. Or they felt something. They knew…something. They got it. I never did. I never felt anything. I didn’t get it.”

And later, Leda explains how she wants Ann to respect how she had comes to terms with death: “I cannot believe what you want me to believe. It’s not who I am. It’s not who I want to be. It’s not something I’m going to do… Because then I’m not afraid. That there is nothing but this. There is no redemption or new life or next life or True life. There is nothing but this here now. Maybe there’s goodness and maybe there’s some kind of peace but if there is it has to be here and it has be now. Me here, you there. That’s all. And if you believe something else, then fine. It has nothing to do with me anyway, right. I just need for you to let me have my nothing.”

The sole flaw here is that one character undergoes a major change off stage and the cause is never revealed, which robs the audience of knowledge so crucial as to undercut the narrative’s credibility.

Primal Forces is a modest company from the same people who used to run theater at Arts Garage in Delray Beach, committed to doing small but affecting dramas that you have likely never heard of. This fits their mission perfectly.

Note: If you haven’t been to Empire Stage recently next to the railroad tracks, the space has been renovated ($55,000 worth owner Dave Gordon said) and looks much nicer than before.