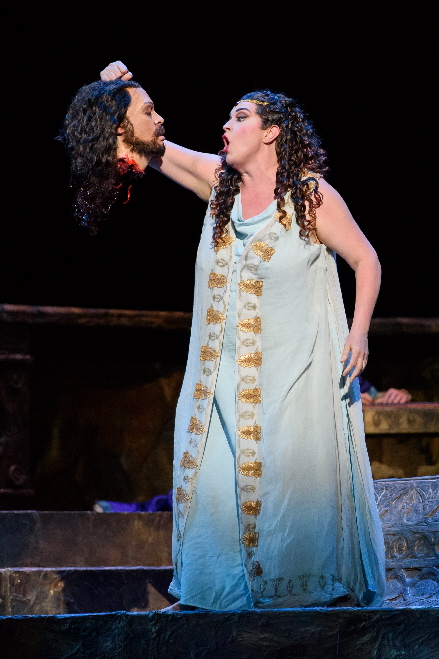 Someone asked opening night whether Florida Grand Opera’s production of Salome was anything like the early productions in 1905-1907 when its psycho-sexuality caused it to be banned in a few countries and insanely popular in a score of others.

Well, it’s doubtful those productions mirrored FGO’s in which Salome thrusts the bleeding decapitated face of John the Baptist into her crotch and King Herod seems to sexually stimulate himself lying prone on the floor at the sight of Salome. Nor is it likely that a 21st Century sense of humor slipped out with the director and cast winking a bit at the audience so that the evening is sprinkled with restrained laughter.

What FGO’s first production of the work in 15 years likely does share its masterful passionate singing, a powerful orchestra that can sound like a hurricane breaking on a rocky shore and better than usual acting by performers whose faces are often as expressive as their voices.

Given that opera is almost by definition more over-the-top credulity-straining than other performance art genres, this production savors the opportunity to let go any restraints. And yet, inexplicably, within its own vision, the production works perfectly well, helmed by director Bernard Uzan and conductor Timothy Myers in his FGO debut. It does not feel like an undisciplined free for all, but straight-forward opera.

The New Testament tale with a distinctly Old Testament vibe of rampant sin being punished, of course, tells the story of the young spoiled princess Salome in the Judean court of her licentious stepfather King Herod and her birth mother Herodias. Herod has imprisoned the insurrectionist John the Baptist whom he fears as a genuine prophet. Salome falls into lust-at-first-sight, but the holy man refuses to give in to her seductions, even to kiss her. The never-rejected Salome agrees to her lust-driven stepfather’s entreaties that she dance for him by doing a strip tease in exchange for anything she wants. When she finishes, she asks for John’s head. Herod resists but eventually succumbs. Salome then professes her love directly to the head, culminating in kissing its lips. A horrified Herod orders her executed. Sort of like The Walking Dead meets Beverly Hills 90210.

Much of the laughter derives at these entitled royal one-percenters indulge in their sex-driven obsessions further and further. When Salome triumphs in boxing in a reluctant Herod on his promise to grant her homicidal wish, a sick smile of Valley Girl satisfaction crosses her face. It’s really hard to feel any sympathy at all for her, but it does represent in these #metoo times, a vicarious triumph for women being viewed as sexual objects.

Salome was Richard Strauss’ first popular and acclaimed opera after a successful career writing tone poems and symphonic works. He took the outrageously scandalous play Salome by Oscar Wilde and made heavy cuts to the script before composing a score for it – much like the process for his tone poems.

Besides the Dance of the Seven Veils  – more on that later – Salome is best known for Salome’s long taxing internal monologue at the end in which she taunts the bleeding head for spurning her and finishing up by kissing its cold lips. It requires a diva with stamina, strength, power and an actress’ ability to make credible a descent into near madness.

Opening night, the work was blessed with the performance of Melody Moore, a Tennessee soprano who was making her FGO debut in a part she had never played. Her voice effortlessly sank into the depths of her register and then soared into the upper reaches to mirror her character’s inner tumult. She inhabits the Brahmin princess who likely hasn’t heard the word ‘no’ much in her life and yet who seems to genuinely grieve for the man she has had killed.

The role will be played on alternate nights by Kirsten Chambers, a Pennsylvania soprano, who has done the role before.

John gets a mountainous performance by Mark Delavan whose baritone issues forth from his sunken cell with a censorious strength, equaled by his imposing physical presence and stern piercing visage.

John Easterlin somehow makes the lecherous Herod credible although Strauss and Wilde only gave him a couple of dramatic notes to play and he must act like the salivating Big Bad Wolf at the sight of the Three Little Pigs.

Uzan’s work (plus all the rented sets and costumes) derive from a 2016 production directed by Robert B. Driver. But Uzan and Myers seem to have elicited a potent riff that feels very much of the moment. A side note: You might notice that other than the king, no one including prisoners like John seem to miss many meals at the palace of Herod.

There is one crippling misstep. The Dance of the Seven Veils, supposedly sensual enough to drive men insane, is simply laughable. Chambers reportedly is a trained dancer, but Ms. Moore clearly is not. Rosa Mercedes, like any canny choreographer, fits her work to the abilities of her performers. So she gives Ms. Moore few dance steps but a bunch of ludicrous arm waving movements more likely found in a grade school play, which Ms. Moore does not execute gracefully shall we say. Yet this inability is mocked by having her backed up by a corps de ballet of more skilled dancers. And six of the veils in the strip tease – which does end in a brief glimpse of nudity – are not a costumers’ delight of swaths of cloth to doff, but red silk hankies thrown to the floor with such silliness that some audience members audibly counted them off. Back in the day, companies dealt with a similar problem by having a different actress pinch hit during the dance sequence.

Other than that, FGO’s Salome moves along steadily in a one-act 100-minute spurt.