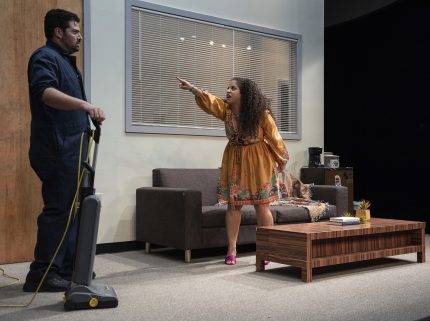 In early scenes in Fade at GableStage, the young, ultra-nervous Latina television scriptwriting novice Lucia solely speaks half-commands and remarks in Spanish to the silent thirty-something Hispanic janitor cleaning her new office, simply assuming he cannot speak much if any English.

But it becomes clear that the man, Abel, speaks “perfectly fine” English. Indeed, Lucia is the Mexican native who moved to Los Angeles while Abel’s family, which proudly sees itself as Mexican, has been in the United States for three generations.

Over and over during the pair’s evolving awkward friendship, one or the other blunders with mistaken assumptions, prejudices and lazy oversimplifications rooted in abysses of divided gender, class and especially identity — what it means to be Latin in 21st Century when one such term cannot possibly encompass the vast diversity within that single ethnicity.

In one plot and thematic level, Fade is an intriguing if predictable indictment of talent succumbing to the seduction of ambition. It’s an eminently watchable production enhanced with engaging performances and solid direction. It’s predictable in that when a secret is revealed about two-thirds of the way through the evening, most observers easily can guess the rest of the narrative arc.

But what makes this exercise special is how playwright Tanya Saracho’s verbally intense script not just interlaces, but infuses into this familiar tale an insider’s incisive depiction of a diversity within modern Latinx life in a predominantly Anglo society.

Many Hispanics living in Miami-Dade — a melting pot of South American and Caribbean emigres — know better than anyone in Southern California that there is no ethnic monolith. But it’s fascinating to see Hispanics — in this case Mexicans living in Los Angeles – make the same overgeneralized lumping that many Anglos do, prejudiced or not.

Certainly Anglos get their share of justifiable grief as the two characters compare profound offenses and microaggressions, down to no one having the respect to learn how to correctly pronounce their names, as in Abel is correctly uttered as Ah-bell.

But a socio-economic gulf divides the two. She thoughtlessly and heedlessly refers to people like Abel being from “the wrong side of the tracks.” When he gently derides her privileged upbringing of having a maid, she defensively argues, “Everyone in Mexico has a maid. Even maids have maids now.”

Plot wise, Lucia has written one semi-successful novel and yearns to write a second, but a lack of sustaining income and probably some fear of failure has led her to accept a writer’s job very low in the pecking order of a major television producing company. She is painfully aware that she has been hired as the company’s perfunctory diversity hire to an all-male, all-white staff and she is relegated to minor and menial tasks.

But in a telling scene, she has been asked by the main writer to come to his office to help with an emergency. But once she arrives anticipating that it is to solve a script problem for the first time, it turns out that the writer’s Hispanic maid at his home is creating some problem. All he wants is for Lucia to talk to the woman and solve some dustup in the house.

Abel, who has been a sympathetic ear to Lucia’s regular venting rants, says he understand that she resents only being valued for her ability to speak Spanish. But Lucia’s pain is not that; it’s that she was only called in for her ability as a translator rather than as a writer.

Lucia is always running at 11 on an emotional scale of 10, limned by New York actress Alexandra Acosta, a Columbian who grew up in Miami. Her Lucia – whether happy, sad, proud, defensive, whatever — barrels along non-stop like a Brightline train. Her body seemingly vibrates like a tuning fork and words gush out of her like an open fire hydrant.

Abel, perfectly delivered by local veteran Alex Alvarez, begins as a tightly-controlled individual, working the night shift after being taught the painful realities of life and all too knowledgeable about the socio-economic difference between the two. But he credibly charts the withdrawn Abel’s cautious easing up in a series of scenes in Lucia’s office.

Considerable credit is due director Teo Castellanos, best known here for his movement-centric multi-disciplinary performance art. He keeps this dialogue-heavy undertaking moving smoothly and makes the differences distinct between the characters, down to Lucia’s manic body movements and Abel’s relative stolidness.

Saracho, who herself worked in a television production company, presents this as a series of episodic scenes echoing someone changing channels on a television, each ending with a sudden blackout and then having the other start with a slight fluttering of light.

A nod is due Assistant Stage Manager: Marialexia Hernandez working backstage to aid in a dozen costume changes and prop placements

The 95-minute production does feel a tad long, although on a single viewing I’m not sure where you would trim it. And the story of souls lost to ambition likely was told by Aristophanes.

Fade qualifies as bragging rights in the renewed effort by South Florida theaters to reach out to young diverse audience by producing works that tell a story they can recognize and relate to. It also marks the final show in GableStage’s first season under its new Producing Artistic Director Bari Newport who has presented an eclectic array of work.