Don’t Trust Anyone Under 30: Pigs Do Fly’s A New Attitude Is 2nd Evening Of Short Plays 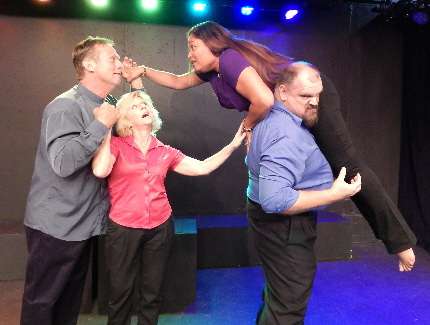 Like theater designed to push the button of Jews, African Americans, Latinos, the newest Pigs Do Fly Productions’ end-of-summer frippery Fifty Plus: A New Attitude relies on the recognizability of plights common to a disenfranchised overlooked minority, in this case, late middle-agers slipping into senior status.

This fledgling company’s second outing of short comedies focusing on this third act in American life is a mildly entertaining, pleasant diversion punctuated by several guffaws and chuckles. But the undemanding evening generates little electricity and produces too few stretches of outright hilarity to earn it much mention to your friends on Facebook. In its best moments, it’s simply insubstantial cotton candy at the very end of the carnival that some people overgeneralize as summer theater in South Florida.

Pigs Do Fly (as in “That’ll happen when pigs fly…”) is a company created by and staffed by an over-50 demographic committed to depicting issues that speak to their generation – issues that they hope will be of interest to patrons of all ages.

This edition is directed by Marj O’Neill-Butler and Beverly Blanchette who keep the evening moving smoothly, and they lightly butter the bread with nice touches like a man getting up stiffly from sitting too long, or a man using two different types of glasses with one hanging on a chain around his neck.

They have chosen a game repertory cast of Todd Caster, Elissa Solomon, Adela Del Rio, Janet Weakley, Kerry Sensenbach and Troy Stanley, all of whom are clearly of the appropriate age. Sometimes the sextet get material worthy of their variable abilities, sometimes their skill triumphs over less challenging material, sometimes they seem like amateurs auditioning for a sit-com.

As far as the six scripts culled from hundreds submitted, we have held forth many times about how deceptively difficult it is to write a satisfyingly funny or touching or funny/touching ten-minute play. These, at least, have a plot or character arc — while those in many other companies lack to the point that they are simply a cute premise or skit in search of a point. In keeping with the company’s commitment to avoid condescension to the target generations, sex or love figures in almost all of the playlets but pointedly avoiding lame jokes about Viagra. A common problem with most of them is that the narrative usually lolls around too long before staking out their premise and then going forward.

Donald Steele’s Memoir directed by O’Neill-Butler is a slow clichéd start to the evening in which a tweedy retired senator (Caster) is having trouble writing his memoirs despite the seemingly unflagging adoration of his beaming wife (Solomon). When he makes a confession to her about his past that we’ll save as a not-much-of-a-surprise, neither of their reactions seems very believable.

Remote Control by Connie Schindewolf is an intentionally broad comedy directed by Blanchette about a blue-collar couple (Sensenbach and Weakley) having trouble making technology work in their household – something many in the audience chuckled at in recognition. The solution to their woes is a delightfully preening bad boy Caster whose role, again, needs to be kept secret for the play to work at all. The problem here as with most of the pieces is it takes way too long to get to its premise let alone its point, and then it goes only one step further.

Buddhists in the Basement by Mary Beth Smith, directed by Blanchette, has a trend-obsessed wife (Del Rio) returning from a Buddhist retreat weekend with two wacked-out believers in tow (Solomon and yet another daffy persona from Caster), to the disgruntlement of her hubby (Stanley). This one also would be in danger of falling flat if not for the energy of Stanley and the silly posturing antics of Caster and Solomon as choreographed by Blanchette.

The evening improves after intermission. Rainbow Sprinkles, by Stacey Lane and directed by O’Neill-Butler, has an uptight officious executive (Weakley) interviewing potential entertainers for her ten-year-old grandson’s birthday party. Enter the ebullient and effervescent clown of the title, the tall and ample Stanley in full clown regalia, makeup and brimming with infectious enthusiasm. She interrogates Rainbow about each part of his act. Citing political correctness and other modern mores, she torpedoes each piece of his act from face-painting to a magic show – until the nearly deflated clown has nothing left but his pride, which he refuses to abandon. The script likely would not work but for the unbridled oil-and-water contrast provided by the actors and O’Neill-Butler.

Your Kiss Is On My List by Christopher Lockheardt and directed by Blanchette, is the least farcical but oddly the most intriguing. A tired bespectacled business drone (Sensenbach) is waiting at a bus stop when a slightly younger woman with a sensual, playful Sophia Vergara voice (Del Rio) asks if he wants to kiss her. Turns out she is not a hooker but just a woman who loves to kiss and be kissed. She has successfully propositioned 387 strangers to kiss her (well, 386; she knew the first guy). But only once. It’s an offbeat little piece that toys with the difference between physical pleasures and emotional love.

The evening saves perhaps the best for last. Sharon Goldner’s Mrs. Greenblatt’s Place In The Universe, directed by O’Neill-Butler, may not be a memorable piece of writing. But the director gets satisfying comic performances from the flinty byplay between Solomon and Weakley as a daughter and mother who have the same birthdate. They are at a trendy restaurant for a quick lunch to celebrate the younger woman’s 50th birthday. Weakley as the mother burbles with life, flitting around from topic to topic until her acerbic distracted daughter Solomon erupts with “You have elevated randomness to an art form.” There is clearly affection and frustration between the two that will resonate with audiences.

But their now-classic reversal of disapproving daughter and free-willed mother , takes a major turn that throws that relationship into high relief when the mother makes a revelation (again, awfully late in the skit). It’s silly, and the daughter’s initial reaction is almost implausible with a later conversion even less plausible. What makes this work pretty well is the witty banter and especially the chemistry between the two actresses under O’Neill-Butler’s leadership.

The company was in danger of turning away patrons on the first Friday of the run in the tiny theater, so obviously Pigs Do Fly succeeds in touching a nerve. But while there are a lot worse offerings out there right now, there are better as well.