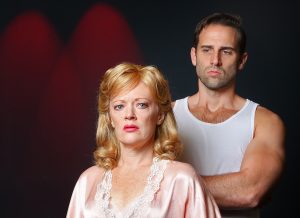 Even for Palm Beach Dramaworks, which has produced a stunning string of successes recently, its A Streetcar Named Desire creates a category of its own with an emotionally scalding portrait of flawed human beings scraping each other raw until the inevitable tragedy erupts.

But before that detonation, a quartet of almost chemically mismatched spirits reach out in desperation, fence for position, attack each other, embrace each other and execute a dozen other choreographies in this edition of Tennessee William’s iconic classic.

While the production helmed by J. Barry Lewis is deeply faithful to the text, audiences absolutely must jettison expectations based on the film or earlier productions. The film could not get issues past the censors, notably Blanche’s husband’s homosexuality. And crucially, and wisely, no one even attempts to echo Marlon Brando, Vivien Leigh, Jessica Tandy, Jessica Lange, Alec Baldwin or anyone else you may have seen.

Instead, Danny Gavigan delivers his own faultless, calibrated and nuanced Stanley who can brutally lash out when his ego-dependent sovereignty is challenged and yet be unreservedly vulnerable in his adoration of his wife.

But it is Kathy McCafferty who gifts us with one of the finest performances of the season in her singular unique creation of a haunted Blanche whose past drives her inexorably forward into behaviors almost guaranteed to lead to disaster.

Streetcar has rarely been conquered completely by even the most accomplished companies anywhere because of an inherently problematic aspect that Lewis and company have courageously chosen to face head on.

Specifically, all four major characters are complex, flawed individuals. Williams and this production have bottomless compassion for all of them, but they do not excuse how they all bear responsibility for what happens. That means that the audiences have no one to unreservedly root for or side with during a play that runs three hours including two intermissions. Streetcar qualifies as an uncompromising work of art, not a TV movie of the week.

But that makes the evening all the more a wearing experience as the combatants spiral downward with Stella and Mitch forced to take sides.

McCafferty and Lewis drive that descent non-stop with Blanche’s desperation-fueled verbiage that careens from nervous nattering to yearning poetry, clumsy flirting to poorly concealed manipulation, and especially heart-rending reminisces. McCafferty triumphs over the huge challenge in that Blanche’s overarching posing, pretensions and duplicity are so unrelenting that an actress has to work hard to invest it with variety. This comes clear as she and Lewis juxtapose Blanche’s unsubtle attempt to seduce a young newspaper subscription collector and then plays the prim coquette when Mitch shows up moments later.

Among McCafferty’s most powerful arias is Blanche’s “confession” to Mitch, a reverie about her discovery of her husband’s sexuality and her fatal condemnation. When she repeats “You disgust me,” her ferocity is aimed as much at herself as the man she loved.

In the other corner, Gavigan and Lewis correctly make Stanley far more than a brute animal so much as a creature of his unenlightened time. His rejection of Blanche’s artifice comes as much from his knowledge that Blanche comes from the same alien social strata that his wife does and might long for. An eager acolyte of Huey Long’s “every man a king” philosophy, he resents Blanche’s disdain.

Credit Gavigan for the one scene in this production that rips through the fourth wall of an audience watching a play: the aftermath when Stanley viciously slaps Stella. Per Williams, Stanley collapses outside the stairwell begging her to forgive him with a feral wail of agony that Brando made famous. But Gavigan’s Stanley is not howling out of self-centered fear that he might lose Stella, although he does feel that. His call of “Stella! Stella!” is an acknowledgement to himself and anyone in earshot that he has committed a nearly unforgiveable sin inflicting pain on the person he truly loves. On his knees, he collapses burying his face in her dress like a pleasing child. It is that kind of nuance that Williams, Lewis and Gavigan invoke that make Stanley a far more multi-dimensional creature than you might recall.

That we residents of the 21st Century #metoo movement believe that Stella credibly forgives and later excuses Stanley’s transitory behavior is due to the fine performance of Annie Grier. She has the difficult role of a woman who loves her sister and appreciates their shared background, but who has cheerfully embraced this pragmatic lifestyle without a shred of regret or embarrassment. When Blanche insists she needs to get out of this situation, Grier’s Stella responds evenly, “I’m not in anything I want to get out of.”

Brad Makarowski is solid as Mitch, especially in the evolution of him as a sweet lonely man seeking a loving (and sexual) relationship, who then turns angry at the betrayal of learning of Blanche’s past.

The slender muscular Gavigan played the role in 2016 in Baltimore but has worked to find different colors. McCafferty creates a jittery, antsy visitor well aware she is in a strange dangerous land – a far cry from the supremely confident Regina she played in Dramaworks’ The Little Foxes two years ago.

The production seems to be missing a few elements or they may have been directorial choices. Williams reportedly saw these two antagonists as polar opposite points on a human spectrum. But here they seem to just be incompatible human beings completely different in their DNA, almost separate species.

Further, while Stanley and Stella’s sexual attraction is evident, the supposed undercurrent of sexual tension between Stanley and Blanche doesn’t exist. When he says just before the rape, “We’ve had this date with each other since the beginning,” it seems more like the climax of their antagonism meant as punishment rather than containing any element of culmination of a sexual dance.

Once again, Lewis has molded all the elements into a uniform vision and proven a skill for almost invisible staging nearly unparalleled in this region. Among his many accomplishments is keeping this long exhausting story moving at a brisk clip and injecting a physicality in the proceedings from Blanche’s initial desperate clutch at her sister to Stanley’s slamming the table.

Lewis sees the play occurring against the background of a multi-cultural community that affords Blanche no harbor, so it is populated as Williams wanted with neighbors and street vendors played by Julie Rowe, Gregg Weiner, Thomas Rivera, Suzanne Ankrum, John Campagnuolo, Renee Elizabeth Turner and Michael Collins.

It has become expected that Dramaworks’ creative team delivers nothing but the finest work in the region. Set designer Anne Mundell and lighting designer Kirk Bookman create an environment to envelop the audience’s consciousness with a two-story building that can only exist in the French Quarter — moldy, peeling paint, ornate balustrades and hints of a faded former elegance to match Blanche herself. Brian O’Keefe has not created costumes for characters to wear, but built character-revealing clothes that Blanche, Stella and Stanley and their friends could have taken out of their closet. Abigail Nover’s soundscape doesn’t simply pump sound effects and Dixieland music out of auditorium speakers but has them naturally emanate from specific places in the room with specific timbre and echoes. Even the carefully-selected props seem to have been in the rooms for years rather than the second hand store down from the theater.

A Streetcar Named Desire will run through Nov. 3 at Palm Beach Dramaworks, 201 Clematis St., West Palm Beach. Show times are 7:30 p.m. Wednesday, Thursday; 8 p.m. Friday and Saturday; and 2 p.m. Wednesday, Saturday, Sunday. Individual tickets are $77. Student tickets are available for $15, and Pay Your Age tickets are available for those 18-40. Tickets for educators are half price with proper ID (other restrictions apply). Call (561) 514-4042, or visit palmbeachdramaworks.org.