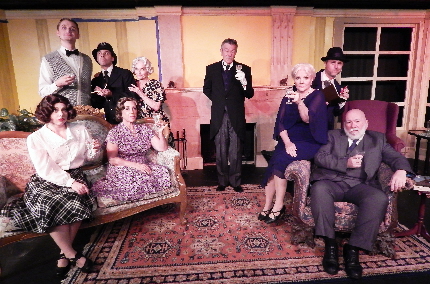 Every once in a while on opening night the cast of Evening Star Productions’ Murdered To Death would visibly struggle to stifle a smile. You couldn’t blame them.

This comic murder mystery satire becomes so supremely silly with slapstick, overheated melodrama and an endless supply of verbal blunders that the actors have little recourse but to succumb to the infectious laughter from the audience.

No, nothing connected to this script or this local production will end up at the Carbonells next spring and it does toddle a bit too long, but the giggles, chortles and cackles are proof that this trifle is undeniably entertaining.

This broad lampoon of every veddy British country house mystery will remind you of Clue the Movie and Neil Simon’s Murder By Death among others send-ups, although there is a reasonably legitimate if Byzantine puzzle mystery buried beneath it.

This collection of the usual suspects, Agatha Christie Division, contains a tight group of intentional stereotypes, each with so many intersecting backstories, secrets and motives that it may be hard to figure out who is going to be murdered first at this pleasant little weekend party.

Once the bodies start dropping, enter the puffed up police investigator Pratt — a bumbling combination of Inspector Clouseau’s forensic incompetence with the verbal ineptness of Mrs. Malaprop, except those two were insightful compared to blithely clueless Pratt. Embodied by actor Seth Trucks and directed by Rosalie Grant, his physical clumsiness is only exceeded by his endlessly changing mangling of everyone’s names. Any time Trucks is on stage, playwright Peter Gordon’s script jumps up several notches on the comic scale.

Much of the cast is, like Trucks, part of the unofficial family of this small company affiliated with Grant’s Sol Children Theatre but which focuses on adult fare.

Phyllis Spear is the doyenne and hostess; Murphy Hayes is the jovial retired Col. Craddock; Kitt Marsh is his caustic wife; Amanda Ortega is Spear’s English Rose niece; Christopher Mitchell is the oily art broker with the most suzpishous French accent in zee vorld; Renee Elizabeth Turner is the sexy socialite; Lito Becerra is the long suffering constable putting up with Pratt, and Fern Katz is Joan Maple, the elderly busybody from the village whose appearances always coincide with a murder wherever she goes. Special mention is due the ever dependable Jim Gibbons as the seemingly slow-witted and sherry-addicted butler with a desert dry delivery.

Grant and company happily wallow in Gordon’s tongue-sticking-through-cheek scene-chewing vibe, especially in the muttered retorts, malaprops and intentionally heavy-handed foreshadowing, such as when the Frenchman says, “I dew not know one end of a weapon from zee udder.”

One character says rhetorically upon exiting, “I don’t know why I bother,” to which someone else snaps quietly, “I didn’t know you did.” Or when Pratt meets the French art broker, he suavely tosses off, “Bonjour, mon amigo.” There’s also a bit of slightly blue humor such as when the colonel says he’s not a fan of Paris: “I don’t care for that iron erection.”

Certainly, this is a cartoon and one that hangs on about one solution and 15 minutes too long. But with errant pistols, forged paintings, blackmail, an adulterous affair, an alluring last will and testament, acerbic putdowns and a good deal of sherry – how can you go too far wrong?