Extra! Extra! ‘Newsies’ At The Maltz Is Newsworthy

Posted on December 7, 2017 by Bill Hirschman 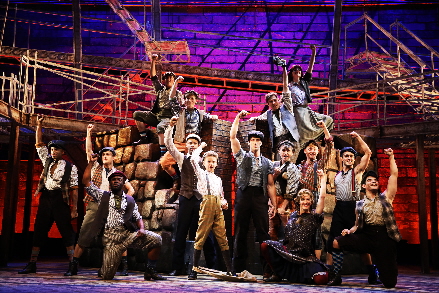 “Papes! Get your papes!” The newsboys of Newsies shout it out. It’s 1899, and they are selling newspapers on the streets of Manhattan. This is when a newspaper headline wasn’t fake news, and when the news of the day could only be gotten from a street vendor, not on an electronic device. “Extra! Extra!”  Trolley Strike Enters Third Week” is what matters to the newsboys of the early 19th century, and to New York World readers in Newsies. Dare we say, daily news wasn’t tweeted back then?

The Maltz Jupiter Theatre gives the Disney Broadway musical something to shout about with its energetic, acrobatic, tap-dancing, choreographic eye-popper of a staging about a group of rag-tag guttersnipes, who end up taking on the establishment.

Said establishment is Joseph Pulitzer’s New York World, who has the newsboys paying ahead of time for their papers. But old Joe is losing money and needs to figure out a way to boost his bottom line. And herein lies the drama (well, it’s a Disney musical, so the drama is a bit sugarcoated): He’ll boost the price the newsboys have to pay. The kids can’t afford it, someone gets the idea to strike, another one says they should form a union, and, oh, yeah, there’s a budding romance with a twist thrown in.

Loosely based on a real event (interestingly during intermission, a couple had searched their iPhone and were watching a YouTube video about The Newsboy Strike of 1899), Newsies opened on Broadway in March 2010 and had a two-year-run, closing in August 2014. Newsies got its start, however, as a 1992 Walt Disney Pictures movie, which starred Christian Bale as Jack Kelly, the teenage runaway who leads the pack. The musical features a score by Alan Menken (Beauty and the Beast, Aladdin, Sister Act) and lyricist Jack Feldman, and with a book by Tony Award winner Harvey Fierstein (La Cage Aux Folles, Torch Song Triology).

To that end, the scenic design by Adam Koch along with projection designs by Zachary Borovay became an element of the show itself, and the importance can’t be denied. Borovay’s projections, large white boards cut askew made to look like torn pieces of newsprint, which sometimes show old archive photos of original newsboys, and, in one inventive scene, displays the same words reporter Katherine Plumber (Clara Cox) is typing on an old Remington, were, frankly, one of the stars of the show.

Koch’s metal firescape added a percussive element as characters jumped and climbed around the stairwell in Act 1’s rousing early opener, Carrying the Banner.
And, while we’re on the production values, choreographer Al Blackstone got the best out of the ensemble, and never made it easy on them. Stunning acrobatics, stellar flips, interesting moves, and a rousing tap-dance number in the Act II opener King of New York gave the regional production a professional polish through and through. Director Marcos Santana kept the show moving at a clip, and used the various levels of the set to create some pretty picture moments.

Adding to the spit shine was the cast, the hard working ensemble of newsboys, and leading the pack, American Idol Season 15 contestant John Arthur Greene, who is currently appearing on Broadway as Theo in School of Rock. Greene took a hiatus from the show to take on the role of top dog newsboy, Jack Kelly in the Maltz production. Greene’s Kelly recalled the swagger of a young John Travolta in Saturday Night Fever. The actor ably balanced the tough talkin’ Naw Yawker with the sensitive artist who dreams of a quieter life out West in Santa Fe. And when he falls in love with the boss’s daughter, you definitely believed there were sparks flying. The only difficulty with the casting of Greene was that it was difficult to believe this upper twentysomething was a teen, mostly because of his beefy build.

Standouts in the newsboy ensemble included Adante Carter as the soft-spoken Davey and the brains behind the strike movement, and little brother, Les (11-year-old Blake McCall, who stole more than a few scenes with his cute flirtations), and Tyler Jones as the disabled Crutchie. As for the adults in the room, Joseph Dellger played his Pulitzer as a wolf of Wall Street, avoiding the caricature that can sometimes befall a Disney villain.

Cox as Katherine Plumber gave the difficult, Sondheim-esque Watch What Happens a workout, but her projection was lost in the higher registers. And Tanesha Gary’s burlesque number That’s Rich faced the same sound difficulty. While it should have been a rousing pick-me-up, the sound got lost within the stage; it almost seemed like she wasn’t miked at all. The projection in both instances could use more oomph.

Yet, the little things never overshadowed this glorious production, where it was apparent from every step, every song, every stage piece, costume, and light, that there was a commitment from every single person involved in the show. And that’s not fake news.

Newsies: The Musical runs at the Maltz Jupiter Theatre, 1001 E. Indiantown Road, Jupiter, through Dec. 17. Show times are 7:30 p.m. Tuesday to Friday, with 2 p.m. matinees Wednesday, Friday and Sunday and an additional 8 p.m. performance Saturday. Tickets from $58. Show time is 2 hours minutes with a 20-minute intermission. Call (561) 575-2223 or visit jupitertheatre.org.