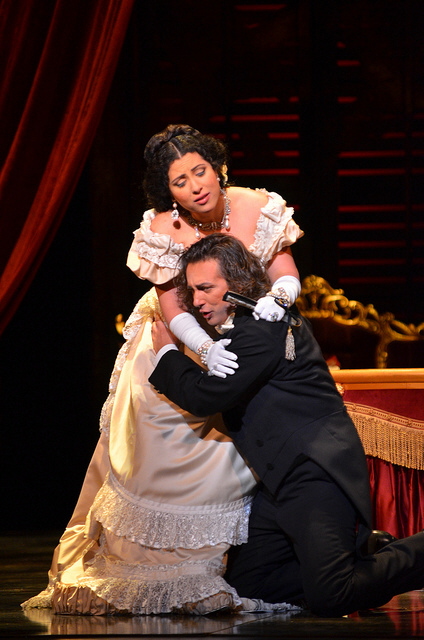 The surprising virtue of Florida Grand Opera’s 11th retelling of Verdi’s La Traviata is that for all the performers singing high E’s at the top of their lungs, all the falling to their knees in sorrow or illness, for all the oversized passions, it’s believable.

Without discounting the considerable but expected display of dexterous singing, the cast’s acting touches the heart with this tale of a courtesan discovering true love when she thought she was beyond that indulgence and then surrendering it with impossibly noble self-sacrifice.

Honor is due Maria Alejandres who debuted at FGO in Lucia di Lammemoor in 2010.  Her Violetta not only conquers the coloratura passages of the first act when she is a party girl living for the moment in the shadow of a fatal disease, but also the lyric soprano demands of the third act when tuberculosis catches up with her. The passion she brings to the second act, when her lover’s father pressures her to renounce Alfredo claws deep into the heart. Alejandres is unusually effective following her superb rendition of  “E Strano,” resolved to return to her hedonistic lifestyle, physically stumbles when the transfixing sound of Alfredo wafts in from off stage.

Surprisingly effective as well is the handsome, long-maned tenor Ivan Magri, making his FGO debut as Alfredo.  His heartfelt assertions of adoration never seem like foolish declamations from some naïve young swain, but the genuine declarations of true love.

Technically fine, but much stiffer is baritone Giorgio Caoduro, wearing copious white hair dye to make him old enough to be Alfredo’s father who persuades Violetta that their liaison will destroy Alfredo’s family. He makes the father’s concern seem altruistic and charts the older man’s growing respect for Violetta.

Playing it safe in this rebuilding season, FGO has chosen one of the most-performed operas of all time. The déjà vu factor is ratcheted up because this production copies the 2008 one created for FGO and the Cincinnati Opera by the director-designer team Bliss Hebert and Allen Charles Klein. Next season is far more adventurous, including the rarely-performed English-language 1967 adaptation of Eugene O’Neill’s classic play Mourning Becomes Electra by Marvin David Levy and Henry W. Butler.

The Traviata score is so demanding and the performance schedule is so tightly compressed that the three lead roles are double-cast. The “second team” will be Suzanne Vinnik, making both her FGO and Violetta debuts; American tenor John Bellemer who has sung the role of Alfredo before, and Joo Won Kong, a young Korean baritone who has worked in San Francisco, playing the father. To identify who appears at which performance, visit fgo.org.

The orchestra, sounding as rapturous as the singers, was led by Ramon Tebar who has conducted three of the four operas this season and was recently appointed Artistic Director of the Palm Beach Symphony. Tebar provided a show himself, swaying with the love songs and leaping into the air rhythmically to the drinking song, waving his arms simultaneously like windmills. The delicate strings sounded as if they were weeping along with Violetta and the Spanish-flavored dance breaks highlighted the precision percussion of castanets.

A nod is also due to the visual lushness, unusual for FGO’s recent productions, from the elegant gowns to the evocative scenery to Thomas Hase’s lighting design that charts the golden summer salon of the first act morphing to the autumnal arbor of the second act to the wintry death chamber of the third.

The directors are in perfect sync with the tragic vision of Verdi, librettist Francesco Maria Piave and the original novelist/playwright Alexandre Dumas, fils. In one place, Violetta reacts to the demands of Alfredo’s father with a rue-filled, “I foresaw this – I was too happy.” But even more telling, as Violetta lays dying, we can see Parisians cavorting outside at carnival – but dancing in a graveyard. Try and resist that.