GableStage’s “I’m Gonna Pray For You” Scorches The Stage 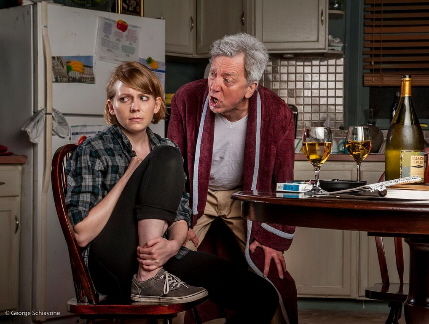 Human beings’ desperate need for affirmation of their self-worth from some source outside themselves – whether it’s from a parent or strangers’ judgments – drives GableStage’s scorching production of Halley Feiffer’s I’m Going To Pray For You So Hard.

The lack of that support, especially when it’s needed from a father or mother, wreaks damage that is passed on, even intensifies from generation to generation, as illustrated in this fictional case study of a famed playwright and his adoring actress-daughter.

Feiffer’s script documents the complex details of the tragedy beautifully, augmented by a virtuosic use of language. But it’s the incisive fearless performances of Tom Aulino and Rebecca Behrens under Joseph Adler’s dexterous direction that gives the play a vibrant life disguising that, only in retrospect, do we realize that the script breaks no new thematic ground.

Nascent young actress Ella is sitting with her father David, a legendary literary lion, as they wait in his Upper West Side apartment for the reviews of her first major stage role – Masha in an off-Broadway avant garde spin on The Seagull.

The play opens as David is in mid-tirade against critics, a torrent of wittily constructed invective that boils down to critics being eunuchs in a whorehouse, although David would never stoop to using such a cliché. His best is describing the relationship between critics and artists as that of “a pedophile and his prey.”

David initially seems a force of nature who rarely pauses in an unbroken oration of supposed advice to his understandably nervous daughter about the business of theater, art, you name it. His enfant terrible arrogance is awe-inspiring with such pronouncements as “I always knew I’d be famous.”

Ella is an adoring acolyte who enthusiastically encourages his every pronouncement and reminisce with girlish giggles, even though she knows these stories often enough to know the punchlines. She only remonstrates him gently about his homophobic language.

The multi-dimensional character created by Feiffer, Adler and bravura work by Aulino slowly reveals that this inherently fascinating raconteur is also a selfish, self-centered egomaniac needing an audience. He’d be holding forth this way for anyone; it just happens to be his naïve worshipful daughter. Her adulation is such that she has adopted some of his vices, the least of which are chain smoking and a liberal use of the F-bomb.

One problem reviewing this show is that the plot takes crucial turns (fueled by alcohol, pot and cocaine) that change the audience’s perception of both characters. We don’t want to spoil these, but, oddly, thinking back on them later, not only are they not surprising but they are logical progressions bordering on clichés and tropes.

So to reveal a few: When the review comes out, it barely mentions Ella. It not only devastates Ella but it unleashes a cruel streak in the previously seemingly supportive David. What we saw as entertaining abrasiveness under the acerbic humor becomes nastily abusive.

This mirrors David relationship with his own disapproving father who rejected his teenager’s infatuation with theater. David tells Ella that the rejection fueled his resolve. When he succeeded, he sent back his father’s letters asking for reconciliation without ever opening them.

The growing conflict leads to a  climax, which in turn produces a second scene set five years later in which we see what David has wrought in a much much changed Ella (a stunning but credible transformation delivered by Behrens). Ella has not only learned David’s lessons well, but proves she can best the master in the play’s vicious penultimate scene.

Doubtless, Feiffer – an experienced playwright and actress – has denied that this is a documentary of her relationship with her famous father, the playwright-satirist-cartoonist Jules Feiffer. But she has deftly catalogued many of the difficulties that their specific situation – an aspiring artist and a renowned parent – must have navigated.

Feiffer has posited difficult roles to pull off: How can Ella be so blind and steadfast? Maybe having been an emotionally deprive child? Why would David encourage her to write plays when it would only be competition?  Maybe because the thought she could not succeed.

But the actors guided by Adler, make the problematic aspects land perfectly. For instance, Ella is enraptured with her father almost past the point of credibility, but Behrens succeeds even when much of her job for the first 15 minutes is to say “Yes, Yes” or “Wow” or “Jesus Christ” with unfettered abandon. Later, when she becomes a kind of performance artist’s Devil Wears Prada type she is almost as equally convincing.

Similarly, Aulino makes believable the key sea change after the review comes out: David switches from perfunctorily encouraging his daughter’s ambition and praising her talent, then savagely questioning her commitment to being an artist.

Adler’s pacing is, as always, faultless, and his molding of the performances is both masterful and invisible. Ellis Tillman ‘s costumes tell you all about the characters before they open their mouth even both characters’ hair changes in the time between scenes.

(Note: Critics get their revenge on those artists who say they don’t care about reviews in the final moments as Ella turns to them for her affirmation.)

I’m Gonna Pray For You So Hard runs through July 8 at GableStage, 1200 Anastasia Ave., Coral Gables, inside the Biltmore Hotel. Performances 8 p.m. Thursday-Saturday, 2 p.m. and 7 p.m. Sunday. Runs 90 minutes with no intermission. Tickets are $42-$60. For tickets and more information, call 305-445-1119 or visit GableStage.org