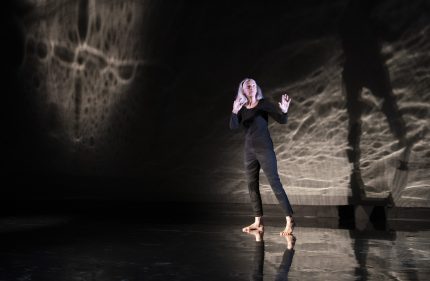 Sara Morsey as Joan Didion escorting us through remembrances of her dealing with death in GableStage’s The Year of Magical Thinking / Photos by Magnus Stark.

In this time particularly, it would seem that death and grieving surround all of us and invade all of us; many of us are dealing with it directly ourselves. So Joan Didion’s autobiographical play at GableStage, The Year of Magical Thinking, is guaranteed to be uncomfortable, even upsetting.

But that should not dissuade you.

Didion’s unblinking detailed account of her processing the sudden death of her husband, novelist and essayist John Gregory Dunne, and the protracted arc of her fatally ill adult daughter, Quintana, is an exemplar of why stage drama exists.

It tells us we’re not going through this all alone; we must deal with much of it on our own, but hundreds of millions of others have journeyed through the odyssey, each in their own way.

Didion, engulfed in a miasma of disoriented confusion, trod through a daunting year. She delayed taking closure actions such as giving away her husband’s shoes because she honestly believed that he “was coming back” to her. Mostly, the acclaimed essayist of “New Journalism” recounts this tragedy sometimes with reportorial dispassion, sometimes with tightly-reined emotions.

The play is not so much about death itself as about the effect it has on the living as they mourn and struggle on a daily basis. They search for how to cope, seeking what another novel we read in high school was titled, A Separate Peace.

In this densely packed expedition, it’s not clear precisely how or even whether she achieves this homeostasis, so do not look for any panacea prescriptions from Didion and Co. In a sense, she seeks an answer for us and herself that never quite materializes.

A former journalist, she cloaks herself with a detachment that most reporters hide behind when covering an emotionally devastating story. There is no self-pity in her voice; yet she is riven with doubt about everything. Her words cannot fail to land deep in the soul of an audience willing to be open to the piece.

Didion’s language and tone can be very ordinary, conversationally sharing. But occasionally the writer slips in subtle but effective metaphors and descriptions. Although her character is relating things that have happened and were felt, she describes them to us like a tour guide just discovering all of this on her initial journey with us.

GableStage’s unique production helmed by Producing Artistic Director Bari Newport features a bravura performance from Sara Morsey, sadly cast from out of town, who must engage and hold the audience for an uninterrupted hour and 45 minutes. But she has an advantage: Morsey first played Didion a decade ago at Florida Repertory Theatre in Fort Myers.

From the moment a light strikes her slender black-clad body and silver hair lost in a dark featureless void, her slow methodical voice immediately attracts the audience. Her voice is steady, only broken occasionally with some wavering and a few minor outbursts. As we walk with the barefoot guide, her affect is not so much controlled as numbed to the horror, sleepwalking, yet more precise and inquisitive on a deeper level than someone who simply blocks out the world.

Newport has paced this evening with a sense of contemplation — not slow but with the casual deliberation of a walk through a forest. For those mesmerized by the conversation, it focuses on the thoughts and images providing the guts of the evening. For those too upset by the topic or seeking a more upbeat brand of theater, Didion’s microscopic retelling of everything from her constantly inverting feelings to listing the type of drugs being used, well, they likely will feel the play is sloughing along and that depicting the arc of the narrative could come far quicker.

The visual elements that Newport has coalesced deliver a vision of the piece far different than any other you may have seen earlier, thanks to the collaboration of Newport, Lighting Designer Tony Galaska, plus Scenic and Projection Designer Frank J. Oliva. (Angie Radosh triumphed in the piece at Women’s Theatre Project in 2010) The bare stage is backed by a near black but actually grey drop and has a shiny black covering on the floor. While initially the only light comes from a few spotlights picking Didion out of the darkness, later this provides a dark canvas for a series of very subtle projections of streaks and the kind of patterns you see in photographs of the flow of blood.

While staying overall in the semi-darkness for 95 percent of the play, the morphing of the lighting changes every few moments. At the very beginning, she speaks with a tightly focused light coming from one side only, so that half of her is in darkness; she even turns upstage on occasion, meaning we only see a slice of one side of her body and her white hair while her face and front are lost in darkness.

Mixed in is an almost constant quiet underpinning of sounds, the almost inaudible ticking of a clock, sounds from the world invading her protective bubble, and lovely plinking musical underscoring from what is likely a harp – all thanks to Sound Designer Matt Corey.

In all this, credit Newport for dipping her audience in an array of styles and approaches in this season’s schedule as she feels out what local audiences respond to and what they might not welcome. She has her own vision, somewhat similar but obviously somewhat different from predecessor, the late Joe Adler. It will be exciting to see what she comes up with next.

The Year of Magical Thinking through June 26 from GableStage in the Biltmore Hotel, 1200 Anastasia Ave., Coral Gables. 2 p.m. Wednesday and Sunday; 7 p.m. Wednesday and Thursday; 8 p.m. Friday and Saturday. Running time 1 hour 45 minutes with no intermission. Tickets $35-$65 plus fees. Call 305-445-1119 or visit gablestage.org