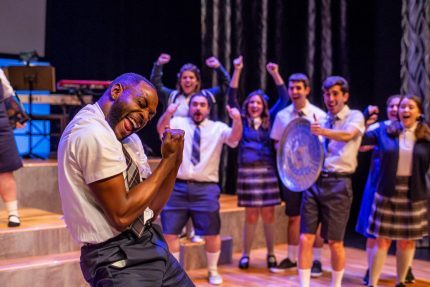 Like death and taxes, one of the few truly dependable things in life is that the venerable Summer Shorts from City Theatre is going to be a satisfying mix of light comedy with a few mildly serious moments.

And its silver anniversary production at the Arsht Center remains a thoroughly entertaining source of 10-minute plays executed by a seasoned cadre of pros from the actors to the directors to the playwrights to the stage crew.

City Theatre, which started as a modest undertaking at the University of Miami’s Ring Theater, has grown with off-shoot productions year-round, plus playwriting festivals and other projects.

The program has a national reputation for finding and developing short plays that need no excuses as a full-fledged theatrical art form. Unlike the half-baked offerings at Saturday Night Live, which find a single joke and hammers it until the time slot expires, City Theatre’s offerings are storytelling plays with a beginning, middle, end and usually a theme. Some are hilarious, some thought-provoking. Some even are musicals – of a sort. But they are not skits.

The Miami company had hoped to celebrate the anniversary in 2020, but the Covid scotched that plan and as well as a hope to reopen last summer. Concerns about audiences’ willingness to attend any theater convinced the company’s leaders to abandon the initial plan of two separate slates of offerings.

Although they are deluged with submissions, this gemstone edition of their tiara usually has five or six solid entries, a couple that don’t play was well as they read, and a couple that will remain in your mind long after the ride home.

Many of the shorts chosen this year are “best of” titles drawn from past editions and the others are new works, usually local or even world premieres. Some are out and out farces, some deal with race relations.

Here’s the rundown of premises.

—- A Small Breach In Protocol At Big Rick’s Rockin’ Skydive Academy by Daniel Hirsch and directed by Elena Maria Garcia is a 2020 Finalist City Theatre National Contest for Short Playwriting and is the play’s southeastern premiere. Lindsey Corey and Daniel Llaca are skydivers who take clients Diana Garle and Stephon Duncan on their first ride, each newbie attached to an experienced hand. All four experience the drop differently, ranging from exultation to terror, especially when the professionals realize not all the safety precautions may have been taken. In this and other pieces, the plays seamlessly slip same sex couples into their universe with absolutely no fanfare.

—- A Little Bit Of Culture by Staci Swedeen and directed by Gail S. Garrisan with choreography by Sandra Portal-Andreu. Originally produced in 1999, features Alex Alvarez as a music lover at a concert and his supposedly bored buddy Tom Wahl. Suffice it to say there is an extended hilarious choreographic interlude by Wahl who may hold the record for number of appearances in Shorts productions.

—- Winner by Amy Berryman, directed by James Randolph, a 2020 finalist in the City Theatre National Contest, here in its world premiere as a full-production. At a post-Tony Award reception, Duncan is a young Black female playwright who has just won the award for her first major play. Also attending is another nominee Wahl, an older white past winner whom Duncan idolizes but who may be past his prime. Their delicate conversation turns ugly when Wahl implies that Duncan earned the top prize by benefiting from the recent push to acknowledge diversity in the profession.

—- Misdial, written by David Lindsay-Abaire (a Pulitzer winner for Rabbit Hole) and directed by Garrisan in its southeastern premiere.  A call from a patient trying to reach her optometrist gets misdirected to one party then ends up in a five-way melee. With Corey, Duncan, Alvarez, Garle, and Margot Moreland.  Misdial premiered as part of The 24 Hour Plays’ 20th Annual Broadway Gala in 2020.

—- 21 Chump Street, a musical, was a hit in Summer Shorts 2017, in part due to music and lyrics by Lin-Manuel Miranda and helmed here by City Theatre Artistic Director Margaret M. Ledford, with music direction by Caryl Fantel. This broadly funny takeoff was loosely rooted in the teen TV hit 21 Jump Street as well as true story. Here, too, an adult (Garle) pretends to be a high school student seeking drug suppliers. An honor student (Llaca) falls in love with the undercover cop and will go to any lengths to impress her.

—-Night Vision by the acclaimed playwright Dominique Morisseau (Skeleton Crew) is a southeastern premiere directed by James Randolph. It’s a moving intense tale of a Black married couple (Duncan and Jovon Jacobs) who witness an attack on the street and who balk at calling police when they cannot agree on the details. The tale is rooted in the dangers of the outside world, multiplied by racial issues.

—- Webster’s Bitch by Jacqueline Bircher and directed by Michael Yawney is a Miami premiere that was the 2020 winner of the City Theatre National Contest.
Corey, Llaca and Moreland working for the dictionary (and their visitor Garle) bicker and fight about social media’s contamination of the strict religion of defining words, aggravated by the renewed social consciousness surrounding words.

—- Tango! The Musical! has music & lyrics by Joe Illick, book by Susan Westfall  (one of three co-founders of the Shorts festivals) and directed by Ledford with music direction by Fantel and choreography by Portal-Andreu. It was originally produced as a short play in 2013; this 2022 edition is the world premiere of the musical. In it, bored married couple Moreland and Wahl are at their weekly dinner out with no expectations of excitement. But exotic waiters Alvarez and Garle entice the couple into a more exciting territory.

—- Go Get ’Em, Tiger! is a commissioned world premiere by Steve Yockey, a regular contributor to the festival, and is directed by Michael Yawney. Alvarez tries to impress his wife Corey by jumping into a tiger cage, but then tiger himself, looking like he just left a Las Vegas club (Jacobs), comes out to admonish them.

—- Chronicles Simpkins Will Cut Your Ass by Rolin Jones and directed by Elena Maria Garcia was originally produced by City Theatre in Summer Shorts 2008. This wild take on playground politics features Mean Girl top dog Corey taking on newcomer Jacobs for supremacy in a winner take all game of tetherball, as the rest of the cast watches.

Mounting this each year is a deceptively massive effort of imagination and scheduling of the talent, with more than 50 people directly involved as performers, writers, director, designers, and crew.

A live band spend the half-hour before curtain time playing a procession of songs Baby Boomers revere, sung by interns whose parents might not have been born when these songs first bowed. The quartet then plays wryly appropriate top 40 singles while the interns change the scenery. The band consisted of Jacob Randall Holmes, conductor and keyboard; Wayne Schiferl, bass; Roy Fantel, drummer/percussionist; and Greg Minnick, guitar.

The program also brings in interns to move furniture and understudy roles, but this year, they also sang with the band: Jake Berube, Sydney Bruenen, SoV Duemichen; Amanda Leslie and Nick Valdes.

If you have enjoyed the company’s mix in the past, this is be a comforting, familiar elicitor of giggles and chortles during a difficult time. 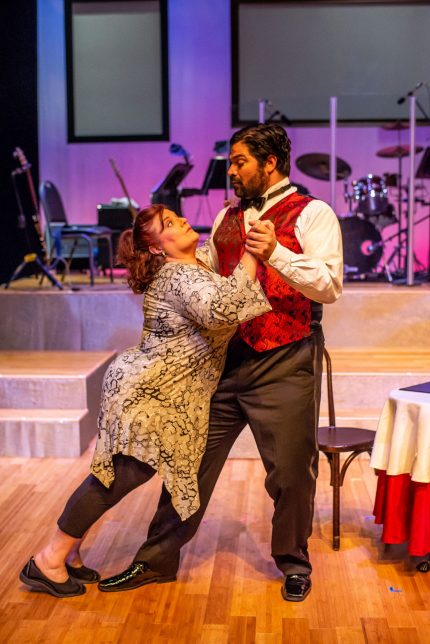