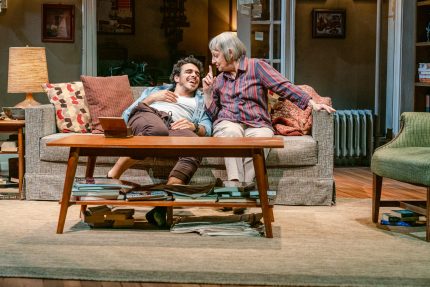 Sometimes, the worthwhile reason to see a production is not the problematic script, but to see what young talented artists and skilled veterans have done to bring it to life.

In the case of Palm Beach Dramaworks’ mounting of Amy Herzog’s 4000 Miles, the satisfying treat is watching the vibrating depiction by up-and-comer Gabriell Salgado of a deeply troubled young man and the brilliant portrait by Patricia Conolly of a 91-year-old grandmother staying vital and engaged while struggling with the debilitating effects of old age.

Given the molding by director J. Barry Lewis and some inspired detailed work by designers, it’s a fine way for Dramaworks to open its 23rd season.

Conolly invests seven decades of experience to create a carefully crafted, well-observed and complex human being, but her result is so naturalistic and so recognizable that you never catch her acting.

Salgado, who stunned audiences in Zoetic Stage’s Frankenstein, reaffirms his ability to infuse physicality in nearly every moment. His sinuous arms, legs and spine seem to curve with every other line of dialogue.

GableStage had the same issue when it mounted the work in 2013 with equally impressive performances by Michael Focas and Harriet Oser. We may quote liberally from our own review of that, which seems to indicate the problem lies with the script.

We can tell you the intriguing premise, we can sketch out the plot, we can describe the engaging characters, we can praise the strong performances and even identify the touching and funny moments.

There’s a personal journey of sorts for the hero who seems to work his way out of an emotional depression while visiting his elderly grandmother in the wake of a tragedy. But what occurs during this visit to spark that change is never discernible.

The play opens at 3 a.m. as scruffy grandson Leo appears in the doorway of Vera’s West Village apartment with his sturdy bicycle and dressed in clothes he’s likely worn throughout the titular 4,000 miles that he has biked cross-country from Seattle – without taking a shower.

Immediately, Leo is way over-ebullient, chatty and exuding that arrogant bravado that you have as a 20-something with a lot to learn – but don’t know it yet.

Vera, a long-widowed left-leaning activist, has yet to put in her teeth and hearing aid. She is cautious as if handling a piece of crockery that could break any moment. She already knows what we learn over time: Leo and his best friend, Micah, left many weeks ago on the bicycling road trip. Micah was killed by a truck in Kansas.

Immediately, even before the funeral, Leo disappeared without calling anybody about where he is or how he is faring. He has stayed missing in action, angering his loved ones, especially his New York City girlfriend in a deteriorating relationship. He has continued the trip, mostly camping outdoors or crashing with strangers. (He says if Vera doesn’t want him to stay, he’ll camp out somewhere – in downtown Manhattan. Really, Ms. Herzog?)

He only plans to stay overnight, although Vera has offered him a place to stay longer, in part because she hopes she can help him work through his pain, and in part, because she knows she can use help with the dementia clearly setting in.

Leo’s burden presents itself like painfully assembled clues in a mystery. As his stay stretches into weeks, we realize that Leo is carrying more complex baggage than the death of his friend.

In fact, Leo has yet to symbolically finish his journey with the traditional ritual of dipping the front wheel of his bike in the Atlantic, just as he began it by dipping the back wheel in the Pacific. He originally meant to do that in Washington D.C, so New York notably is a bit off the planned path. Metaphorically, he also has yet to finish his emotional journey and perhaps his visit is meant to complete the grieving process, but certainly he never seems consciously aware of why he is here and what he seeks. And neither do we.

But Leo and Vera’s relationship is not some idealized movie of the week paradigm. He usually calls her Vera (and ‘dude’) rather than grandma, and he drops F-bombs with impunity. These intelligent and fiercely independent souls may depict a synergistic support system in one scene. Then, Vera accuses Leo of stealing her checkbook and he screams at her to leave him alone after his disaffected girlfriend breaks up with him in Vera’s living room.

What Conolly, Salgado and Lewis have created are two souls adrift in evolving worlds lacking reliable moorings, trying to find human connection while keeping their pride. Over time, they bond and quarrel, get stoned together and share memories in a growing bond of trust.

Herzog offers two other characters, the estranged girlfriend (Stephanie Vazquez) and a one-night pickup (Isabella Chang). The girlfriend probably exists so we have a way of discovering some of Leo’s backstory, although the scenes seem unfocused and their thematic intent unclear.

Perhaps the scene where Leo brings the pickup back to Vera’s apartment to have sex (again, would anyone do that?) probably makes some comment on Leo’s state of mind or evolution or something else thematic just out of reach. But its real accomplishment is to inject hilarity and vitality into the proceedings. Chang is funny as a drunken trend-obsessed rich girl allegedly studying at the Parsons School of Design, careening around the apartment.

The saga does seem to reach an end point with Leo taking a full-time job in the wilds of Colorado, apparently leaving Vera in the lurch but willing to face a complicated situation with his family in his hometown of St. Paul. It’s the least clear part of the evening. Who has learned exactly what? Who has changed exactly how? And why?

But none of this can be blamed on the actors and director (although Salgado does edge being over the top a few times).

Conolly, of course, is a marvel in her timing, her line readings, her mobile face reacting with worry, anger, bewilderment and six other emotions as she tries to assess how to deal with Leo.

Salgado’s Leo has this aggressively, even obnoxiously judgmental New Age-ish latter day hippie patter, dismissive of everything exterior that clearly is imprisoning pains from multiple sources. Somehow, we buy it.

As usual, the design team at Dramaworks is among the best working in the region.

Bert Scott, in his Dramaworks debut, creates a classic modest New York apartment of an intellectual Marxist activist, decorated with decades-old mismatched furniture, shelves of books, fading family photos on the walls, and, in one of the sharpest touches that is never mentioned, yellow Post It notes on walls that the elderly rely on as their minds begin to erode.

Roger Arnold creates an urban soundscape just beyond the walls of the apartment; Brian O’Keefe’s character-perfect costumes include a lovely grace note when Leo borrows his grandfather’s suit to take Vera to a funeral. The shirt sleeves and his arms are longer than the suit jacket that he is not comfortable in.

Kirk Bookman’s lighting subtly shows changes of time and mood without ever calling attention to itself, except for one masterstroke. It’s the middle of the night and an emotionally battered Leo finally tells his grandmother the linchpin story of his recent tragedy. It’s done in the livingroom with the light offs. We can barely see their faces, but the moonlight streams in striations through the blinds and across their bodies.

To read an interview with Patricia Conolly, click here. https://tinyurl.com/2s4ds6b7