Posted on November 3, 2017 by Bill Hirschman 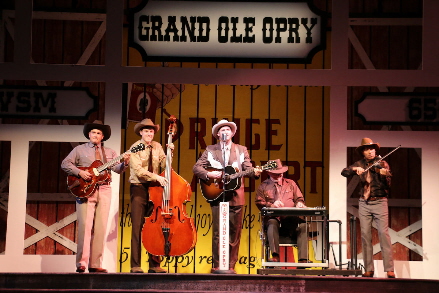 From its upbeat tunes to soulful longings, Hank Williams: Lost Highway takes Riverside Theatre audiences on a revealing musical story about one of America’s most important country singers.

It begins with Williams’ death at age 29 then speeds backward to a time where his no-nonsense mother, a marvelous Marcy McGuigan, held tight rein over her son. But on the road, where he and his band played some rowdy clubs, his drinking accelerated. He mixed it with pills for his bad back. Despite that, he rose to high stature at the Grand Ole Opry but was eventually fired.

More than relying only on the “Hillbilly Shakespeare’s” terrific music, Ben Hope carves a sensitive and moving portrayal of Williams as a man tortured by addiction, smitten with love of a woman and compelled to put to it all to music. Hope is a study in perfection as he brings out Williams’ iconic twang. His resonating performance of the poignant, poetic song “So Lonesome I Could Cry” resonates.

Katie Barton (Hope’s real-life wife) brings humor, sexiness and frustration to Audrey, the beautiful young woman Williams’ marries. A young woman with a solid list of musical credits (national tour of Million Dollar Quartet) she hits all the subtly wrong notes in her funny take on a woman who wants to be a recording star.

But then an old guy walks on stage and rather unceremoniously starts playing the slide guitar followed by the pedal steel guitar. While he doesn’t appear to be the same type of musical road warrior (white hair and beard), his playing is just so easily spot-on that he demands attention. Look for the name Roger Rettig in the program and you’ll find out: He is the Brit who toured with big name artists, worked with The Beatles and the Rolling Stones and with George Harrison. There’s even a Leonard Bernstein credit in his bio.

Tony Perry is Tee Tot, a forgotten character in the Williams’ story. He appears to be the inspiration for much of Williams’ music, although writers Randal Myler and Mark Herlik gloss over this aspect of the story. That’s too bad because that could add even more texture. The writers also drag out the ending, which wants to end about three or four times before it finally does.

David Lutken also plays Williams’ manager and has impressive credits from the West End to Broadway and more. Sherry Lutken plays the waitress in the show and has her own set of impressive credits, including a Helen Hayes Award nomination.

Together, the two manage with grace a tricky scene where Williams meets up with the waitress and, using a portion of a baby blue Cadillac to suggest the real deal, speed along a country road for a romantic evening.

Yes, it tells the story of a talented man burdened by sadness, but more than anything, it delights audiences in some great music. Don’t be surprised if you sing “Hey Good Lookin’ ” all the way home.