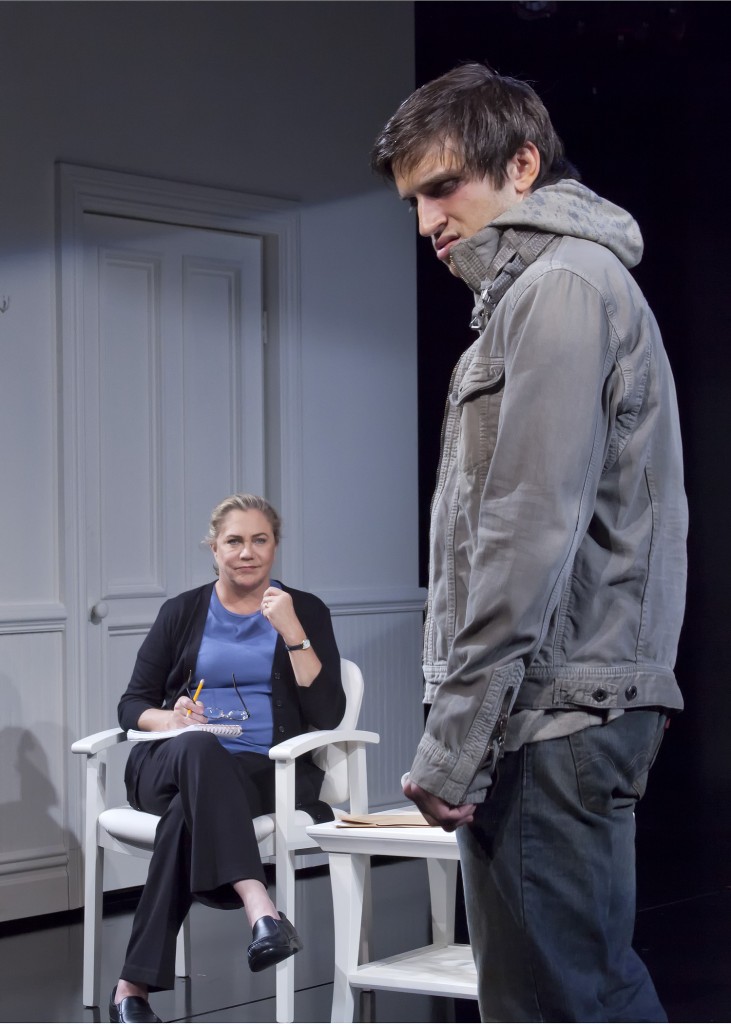 There’s no taking your eyes off of Kathleen Turner for a minute as she commands the stage in Matthew Lombardo’s addiction-focused play High.

While the star vehicle has some fairly unexceptional dialogue and a clichéd plot, which certainly contributed to its closing on Broadway a mere five days after it opened last April, Turner uses all the tricks in her veteran actress’s tool box to ensure that her audience hangs on every line. And they do. But while she is a force to be reckoned with in her role of the foul-mouthed, unconventional Sister Jamison “Jamie” Connelly, it’s not enough to lift High to angelic proportions.

Playwright Lombardo, who lives part-time in New York and in Fort Lauderdale, tells of his own struggle with addiction in a two-page “Note from the Playwright” entitled Coming Clean in the playbill; the two pages prior to that is a scientific written lecture about drug abuse. That should give you the first clue that High is a message drama, and a play that intends to show drug addiction in its rawest form, according to the playwright.

That raw form appears in the character of Cody Randall, a 19-year-old drug addict that Sister Jamie, an addictions counselor for the church, has been given the task to get “clean.” She knows all too well about the struggles of addiction having been a homeless drunk before she found God.

Hidden in the walls of the stark room where Sister Jamie conducts her counseling sessions with Cody are a vast number of secrets. There are two large white doors, and, at any minute another secret could be revealed from behind Door #1 or Door #2. Why is Cody being kept in this safe house when he should be in jail? What is the real story behind Cody’s relationship with Father Michael? What skeletons from Sister Jamie’s past are making this particular case so difficult for her? (Cue the soap opera music).

There’s much predictability in the plot unveilings, and not much room for surprise, except for a scene where Cody in a methamphetamine high strips off his clothes and runs about the stage entirely naked until he finally grabs Sister Jamie and threatens her. The scene offers shock value, yet it’s gratuitously manipulative. The tick tock of the dialogue has a sitcom meter during lines that are meant to set up Turner for a big comic punchline. When the perpetually late Cody enters the room she says, “You’re late.” Cody: “You said 3 o’clock. Tuesday.  It’s 3 o’clock.” Sister Jamie: “It’s Wednesday.”

There are some high moments, and mostly those come when Turner is alone on stage delivering a quartet of soliloquies, stripping away layers of her character’s past, her powerful voice booming throughout the Parker Playhouse rafters as if she’s delivering lines as Lady Macbeth. For one of the monologues, she sits cross legged on the floor bathed in a blue spotlight. She has the audience eating out of her hand. Charismatic in her star power, you almost forget for a moment that this isn’t a one-woman show. In a way, it is.
Evan Jonigkeit as Cody, who made his Broadway debut in High, plays his Cody as second fiddle to Sister Jamie, never really going up against her despite dialogue that should put them neck-in-neck. Turner always has the upper hand in every scene, which creates an odd tension, especially when the dialogue tells us that Cody is starting to make her crumble.

Jonigkeit gets his footing in the second act, but he still can’t cast off his bad-boy caricature long enough to come from any place of true soul. It’s glaring next to an actress who is known to bare her soul in every role she plays, and this time she has found that soul once again in Sister Jamie.

Tim Altmeyer chooses quiet calm for his portrayal of Father Michael Delpapp (Altmeyer  was also in the Broadway version). He brings a strong likeability to Father Michael and scenes between Altmeyer and Turner as they ping-pong back and forth creates sparks. Pity Altmeyer, but applaud his acting abilities. Father Michael has been saddled with some of the sappiest dialogue. His final tearful speech, which should be climactic, comes off as melodramatic – a big reveal that’s loaded with soap suds. Altmeyer delivers it with aplomb.

There’s no doubt that High has its ups and downs.  The saving grace here is Kathleen Turner, one of the best actresses of a generation, who has found a way with High to turn lukewarm water into something resembling a fine wine.