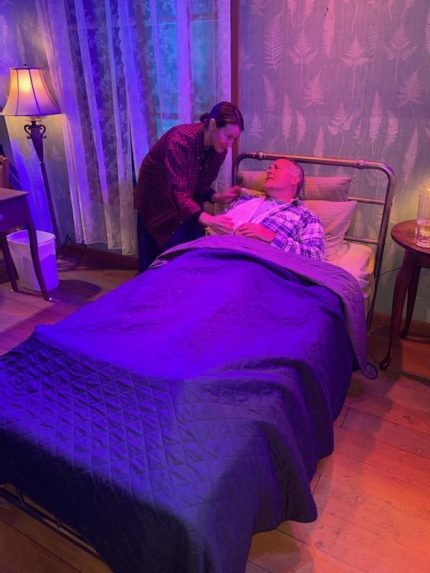 Revivals – from Shakespeare to August Wilson – are often reinterpreted by subsequent artists. But their vibes also change in the perceptions of audiences living through the throes of a socio-political moment, whether the authors or performers meant it that way.

Specifically in the fall of 2022, an unintended resonance echoes in Empire Stage’s production of Misery that novelist Stephen King and playwright William Goldman likely did not quite foresee when the stage version bowed in 2012.

In a world where some people steadfastly, even violently believe whatever they want to believe, facts and reality notwithstanding, where their mindless adoration of a flawed idol borders on obsession, where they long for a fantasy world rooted in “values” past, well, somewhere Annie Wilkes is shrugging and asking “What’s your point?”

This respectable stage version of the terrifying 1990 film and 1987 novel is not meant as a commentary on the current climate. But it’s difficult to ignore the solicitous nurse emerging as a violent maniac when her “reality” is challenged, and not see parallels from that night’s 6:30 p.m. newscast.

Watch superb actress Elizabeth Price’s expressive face as her Annie kaleidoscopes through a mercurial array of worship, hatred, admiration, anger and six other phases in the space of a single minute. She and director Michael Leeds have created the sense of someone who looks like your amicable neighbor but who could be harboring unfettered madness rooted in their need for affirmation of their constructed “reality.”

The basic story still stands: Annie, the self-proclaimed “number one fan” of successful romance novelist Paul, rescues him from a serious car accident. She drags his carcass with shattered legs back to her isolated Colorado home. While she treats him with carefully allotted painkillers, she has essentially kidnapped him, lying that the phone is out and the roads are snowbound. While she is tending to him, little mood swings play across her face as she utters homilies and nativities.

But when she reads the rough draft of his recently completed work – an attempt at a serious literary novel — she forces him to burn the cynical, obscenity-laden manuscript.

Worse, with him still paralyzed in bed or confined to a wheelchair over a period of weeks, then months, she picks up at the general store a copy of what he meant as the last romance novel for his Victorian heroine, Misery Chastain. When she realizes he has killed Misery, she comes unglued. The two swirl in a protracted cat-and-mouse game of lies and manipulations that involve a menacing kitchen knife, an overdose of narcotics in the champagne, a typewriter used as a club, and, of course, the legendary hobbling with a sledgehammer. It’s not going to end well for anyone.

Tension is extremely difficult to maintain over an entire one hour and 45 minutes in any theater piece no matter the script or the artists, and this production only gently suggests the tightening noose. This is not an edge-of-your-seat evening.

But this production has several advantages. Start with the fact that 95 percent of the audience knows what’s going to happen. They recall at least the high points if not every turn from the film and even bloodier novel. That’s a plus. The inexorable spiral into madness and violence actually is amped up because of the very fact that we know where this is going.

Indeed, the script by Goldman (one of my heroes who also wrote the screenplay) is peppered with dark humor popping up at unexpected moments. Very early on, the adoring Annie tells Paul that she’s his “number one fan.” In the book and film, that initial utterance is perceived by the audience as a simple enthusiastic expression. But when you already know that she will say this over and over increasingly, this first arrival in the play of what has become a verbal meme in pop culture brings the audience to knowing laughter.

But the real ace in the hole here is Price and Leeds’ creation.  Many actresses could play one or another of Annie’s multiple emotional facets. But what Price and Leeds have mastered is making Annie’s nearly instantaneous shuttling between these half-dozen states absolutely credible to be coexisting within one person.

Her eyes may glow with joy one moment, then narrow in suspicion the next; a broad smile pushing up her cheeks one second as she revels in her proximity to her hero, then turning into a tight horizontal slit the next when she discovers the real Paul can be a bitter sarcastic jerk. She can lather praise on his work, then issue her ultimate epithet “dirty birdie.”

This slender, plaid-clad woman with her hair pulled back is brimming in ecstasy as she is about to read the last chapter of Paul’s most recent Misery book. Then a after a moment’s stage blackout, when she knows Misery is dead, Annie explodes in with a fury you might not have expected if you hadn’t seen the film or read the novel.

Price, also a director and educator, has added yet another triumphant portrait to her considerable gallery. Currently an associate artistic director for New City Players, she’s also the central figure in City Theatre’s What the Constitution Means to Me production this December.

Granted, it’s nearly impossible in theater – especially in an intimate venue like Empire Stage — to convincingly portray violence for audiences accustomed to watching blood flow on film. So this production is only mildly successful at depicting the parade of assaults.

But Leeds has deftly kept the story moving forward and never succumbs to the inherent physical static quality that you’d think was unavoidable.

Of course, Daniel R. Gordon has the tough job of keeping Paul a vital piece of the puzzle when he must spend much of the play agonizing in bed, basically squirming, grimacing and firing off barely-disguised insults at the captor he realizes is insane. He does cause the audience to cringe as Paul drags himself across the floor trying to find a way to escape. Gordon and Leeds don’t shy away from the fact that Paul is a nasty burn-out who the audience has trouble rooting for.

The edginess is accentuated by Preston Bircher’s underscoring lighting and David Hart’s sound design, which includes a delightfully ironic use of Annie’s love of Liberace as background music and Tchaikovsky in the hobbling scene. Also a nod to whoever created the appropriately wince-inducing makeup for Paul’s legs.

Still, there was a bit of chill throughout the theater. Maybe it was the air conditioning. Maybe it was the unnerving specter of an Annie Wilkes you recognize who refuses to acknowledge that their hero has feet of clay.