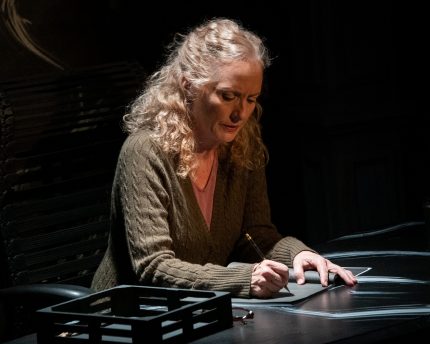 Let’s back into this: I likely see more theater across South Florida than anybody. That’s not bragging; it’s just the logistics of the job, and the shrinking arts coverage geographically by competitors.

So consider that as I write: Across the board, this has been one of the finest quality seasons I can remember, to the point that I almost don’t trust my own judgment when writing yet another positive review. Maybe it has something to do with artists letting themselves fly free after the worst of COVID, but there has been an impossibly consistent run of some of the finest acting, writing, directing and designing that this region has enjoyed. No asterisks.

I say this so you’ll appreciate it fully when I write that Kim Ostrenko’s performance under the direction of Keith Garsson in Adam Rapp’s The Sound Inside at Boca Stage is simply one of the most outstanding we’ve seen this year.

Her incarnation of Yale literature professor Bella facing a terminal cancer diagnosis draws us in as she gently, subtly tells us the story of her most recent months with genial self-deprecation and wry wit. Absolutely without a shred of self-pity or appeal for compassion, she is just a genial storyteller sharing a tale with us as if we were sitting over coffee. But because it is her story, this proud loner cannot avoid baring herself to us.

Bella, who wrote a novel and two collections of short stories, narrates to us in a gently self-mocking manner, not wanting to get caught caring too much.  She is intensely private. “That lamppost over there knows more about me than most of my students.”

“I have no brothers or sisters. I live in faculty housing. I don’t own property. I’m essentially a walking social security number with a coveted Ivy League professorship and a handful of moth-bitten sweaters.”

Her sole love is for literature. She prizes James Salter’s Light Years so much, she doesn’t want to demean it by sharing it with her class.

But this term, among the pack of uninspired students in her “Reading Fiction for Craft” creative writing class, one intense handsome young man stands out as far more talented and invested in the art and craft. The quirky withdrawn Christopher Dunn begins visiting her during office hours without making an appointment by email. He hates the impersonal technology: “I prefer penmanship. Getting ink on your fingers. The human effort.” And he eventually admits he is writing a novel and seeks her expertise and judgment.

Dunn, perfectly played by Jordon Armstrong whether he is being rude or needy, is as much an isolated soul as Bella and is struggling with his deeply-felt artistic impulse and an enigmatic interior. While outwardly self-contained, he can let loose when a fuse is lit.

In a torrential rage about Twitter: “140 f–king characters. Limitation is the mother of innovation? It’s more like the mother of mental syphilis! Twitter’s basically cheap Haiku for the overly caffeinated. I’m not saying I don’t drink coffee. I drink coffee. I just don’t go to the campus cafés. It’s the baristas who really freak me out. With their Civil War beards and artisanal body odor and those stupid f–king doorknobs in their ears. They’re like these New Age, unshowered, tatted-out Hobbits. A life spent perfecting the intricacies of carefully crafted foam art. Gimme a black coffee from Dunkin Donuts any day of the week, Skippy!”

As Bella mentors him outside the classroom, the two bond in a herky-jerky non-sexual relationship that deepens until Bella asks Christopher for a very special and controversial boon.

Their stories are not histrionic despite the emotional swells underneath and occasional outbursts. But even when they are trying to suppress or hide themselves, they know they must expose themselves. Their connection grows and their protective armor slips away, allowing us to see inside both participants.

Underneath this story about life and death is the ineffable beauty of, the deep adoration for the power of words as it is molded into the art form of literature.

In that vein, Rapp’s language here eclipses anything else of his I’ve seen, such as the moving Nocturne, the modern Lower Depths-like Finer Noble Gases. In a few places, his glorious words here come as close to evocative poetic prose as you can get without becoming consciously amateurishly flowery and self-indulgent.

Early in, Bella describes a walk for introspective meditation: “There has been early snow, nearly a foot of it, in fact. Records have been broken. One barely remembers the leaves changing. I’m standing in the center of the New Haven Green, a public park near campus. It’s very cold. There is no wind. The naked trees look palsied and arthritic. It’s that hour of the night when even the most mundane objects seem to possess thought. A guilt-ridden park bench. The serpentine wickedness hiding in a lost scarf. “

But it’s Ostrenko and Garsson who land this work that won Mary-Louise Parker a Tony in 2020.

We’ve seen Ostrenko in a score of roles before, but this time she fuses herself inside the role and because the actress uses parts of herself to fuel the creation, she must courageously reveal herself.

Her expressive eyes, her smooth calm but emotion-imbued voice, her body language all possess an eloquence beyond words, or more accurately, embody the words.

Doubtless, it helps a bit that Boca Stage presents in a tiny theater with a shallow stage so that patrons are no more than ten feet from the stage and in some seats closer than across the dinner table. Often, you looking directly into the characters’ faces.

Ostrenko and Armstrong caress the sound of the words not for show, but to embrace their meaning. As Tom Stoppard wrote about words in The Real Thing: “If you get the right ones in the right order, you can nudge the world a bit.”

Rapp, Garsson and Ostrenko mine the droll dry humor throughout of people who take their reverence for words seriously, but don’t want to get caught investing worth in much else.

“God is a man,” Bella says. “He’s selfish and smokes a pipe and looks like a perverted Eighteenth Century French novelist. My God is a fat man with money who can still get it up. His penis is short and stout and stiff as an old book. My God has gamey breath and gout. My God is basically Honoré de Balzac not much else.”

Garsson’s molding is nearly invisible, but reading the script after the production, it became clear that his staging, his work with the actors, his vision of the piece were elemental to its success.

On the design side, the simple set designed by Dustin Hamilton and painted by Cindi Blank Taylor, the subtle soundscape by David Hart, the costumes by Alberto Arroyo all create the environment. But give an ovation to the lighting by veteran Tom Shorrock – who once had a phalanx of equipment at the old Caldwell Theatre — deftly commanding a tenth of that array to underscore the fluid events without calling attention to itself. 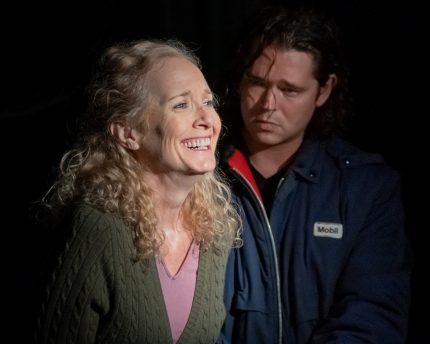 This entry was posted in Performances, Reviews and tagged Adam Rapp, Boca Stage, Jordon Armstrong, Kim Ostrenko, The Sound Inside. Bookmark the permalink.