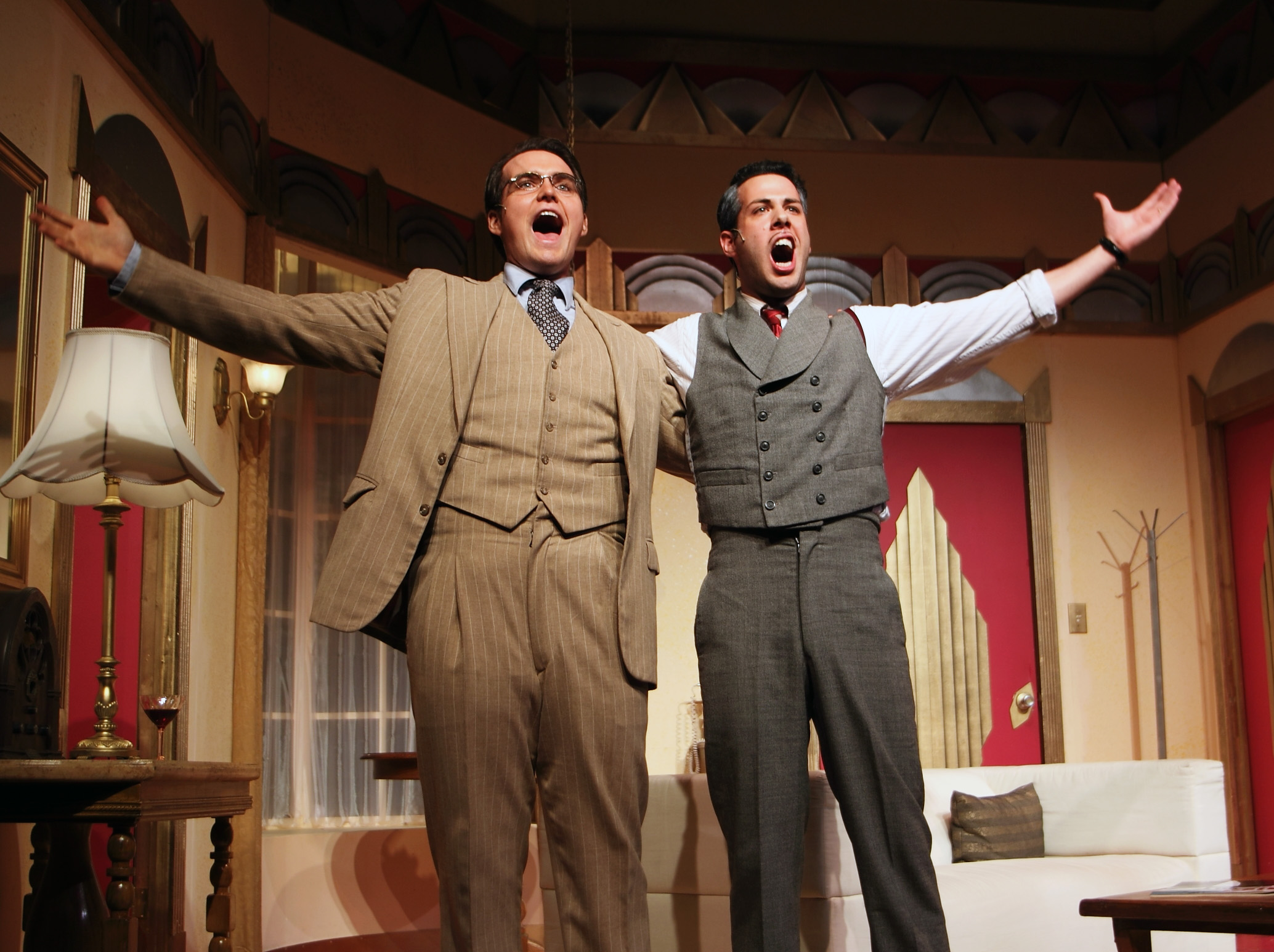 Doors slam, identities are mistaken and laughter ensues in the classic farce Lend Me a Tenor by Ken Ludwig, now getting a delightful production at Broward Stage Door Theater in Coral Springs.

Lend Me a Tenor made its Broadway debut in 1989 and ran for a year, garnering seven Tony nominations and a Best Actor win for Philip Bosco. A revival last year earned three Tony nominations. The play has become a regional theater darling and was notably seen here in 2006 at the Caldwell Theatre in Boca Raton, a production that won the Carbonell Award that year for Best Ensemble.

The show is set in Cleveland in 1934. The Cleveland Opera Company is all-aflutter because the greatest tenor of the day, Tito Merelli, is performing Otello in their big gala that evening.  Saunders, the company manager, is particularly nervous about the evening going off without a hitch, so he orders his mousy assistant Max to babysit Merelli and get him to the theater on time. Max is a milquetoast sort who dreams of singing onstage, not toiling backstage. When Merelli arrives with his jealous wife in tow, it’s clear that marital trouble is in the air.  And after Merelli fails to wake from a pharmaceutical-induced nap, Max has no choice but to go on in his place, to perform a role he just happens to know by heart. Add to the mix a sexpot diva, Max’s girlfriend and a singing bellhop, and the stage is set for a madcap romp

On most levels, the Stage Door production, under the direction of Michael Leeds,  delivers. It starts out slow, but builds momentum. The chaos and the laughter really kick in once the second act is underway, when the show’s pace catches up with the lightning speed plot.

The ensemble excels, but there are standouts.  Janet Weakly is very funny as a high society opera patron dying for a moment alone with Merelli, and Sheira Feuerstein is deliciously over the top as the local opera singer who views Merelli as her ticket out of Cleveland.

But the show belongs to Clay Cartland as Max and Ariel Frenkel as Merelli.  Cartland, fresh off his bravura performance as a narcissistic millionaire in Promethean Theatre’s Song of the Living Dead this past summer, begins Lend Me a Tenor as Clark Kent and over the course of the play morphs in Superman, saving the day and getting the girl. Cartland delivers on both ends of the spectrum.

Frenkel is perfect as the world-weary Merelli. His performance as the befuddled tenor in the second act is delightful and the reason for much of the audience’s laughter. Cartland and Frenkel are especially captivating in the first act, when the tenor gives the aspiring singer a few lessons, resulting in the production’s loveliest moments.

The set, by Ardean Landhuis, is a two-room hotel suite, done up in garish red and gold art deco, which one could see as passing for glamorous in depression-era Cleveland.

Lend Me a Tenor at Broward Stage Door is a dizzying ride well worth taking. 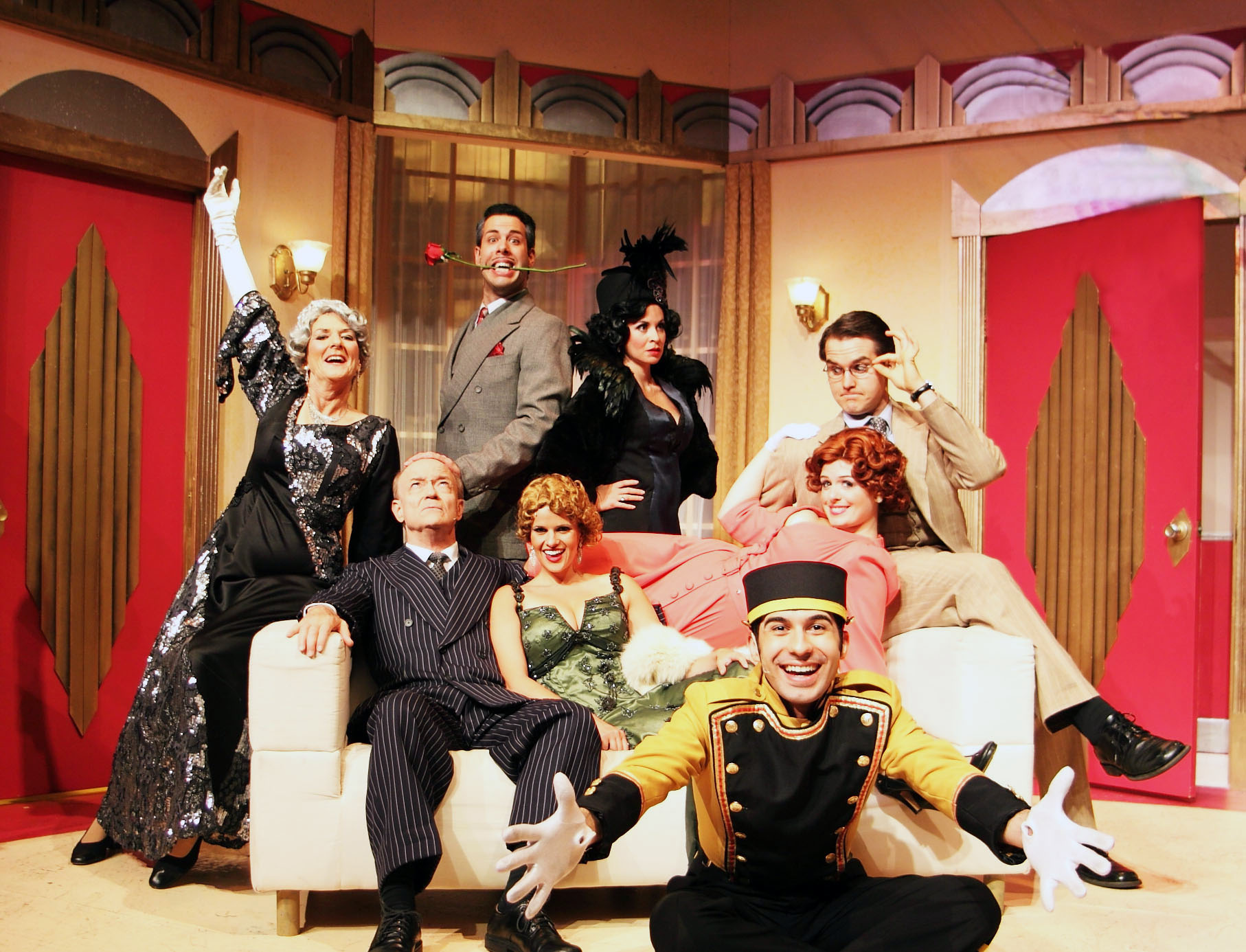 This entry was posted in Performances, Reviews and tagged Clay Cartland, Ken Ludwig, Lend Me A Tenor, Michael Leeds. Bookmark the permalink.