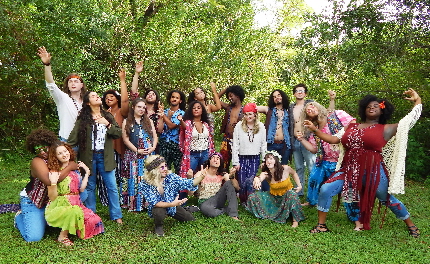 Hair is a weird show, and not because the characters are weird. To the contrary, the flower children of the Vietnam era, which lyricists/book writers Gerome Ragni and James Rado explore with both affection and criticism, have arguably aged more into the mainstream after decades of the liberalization of sex, drugs and rock ‘n’ roll, and the increasing popularity of new age spirituality. All the character of Sheila needs is a wardrobe change, and she’s Marianne Williamson.

No, Hair is strange because of the shambolic structure of the thing, as neither a fully sung-through musical nor a traditional, book-driven story. It all but invented the rock musical when it debuted off-Broadway in 1967, but its theatrical successors in the genre—and, if I may be so bold, Hair’s superior, fleshed-out Milos Forman film adaptation—struck a defter balance.

The show’s charms and its pathos, as well as its disjointed self-indulgence, are present in Lightning Bolt Theatre’s reverently faithful production running through Aug. 4 at West Boca High School. Case in point: The connective tissue linking the production’s first nine songs—from “Aquarius” to “Air”—is virtually nonexistent, lending the atmosphere of a musical revue or counterculture campfire, with the central characters holding court, one at a time, among their bohemian circle of support.

The tunes exude the naughtiness of the formerly controversial, trumpeting the pleasures of illicit drugs, sexual inhibition and stereotype-skewering black pride, their confrontational potency dimming with age. Even with an audience as graying as Lightning Bolt’s opening-weekend matinee crowd, I heard few gasps when Berger (Adrian Machado) stripped down to a loincloth and mooned the audience.

That said, the ribaldry with which Machado, as Hair’s de facto emcee, introduces the show’s energy is spot-on, if less flamboyantly insouciant than Mike Westrich in MNM’s 2016 mounting. As the show progresses, he comes to embody the beating heart of the love-rock generation along with its naïve stasis, channeling the impossible idyll of an eternal present.

So, too, does the rest of director Jessie Hoffman’s cast of millennials accurately conjure the existential crises of the Boomer generation. Fitted in rented costumes that mirror the 2009 Broadway revival, they are a motley crew of largely new faces, 20 members deep, all with promising futures in the South Florida theatre community. A generous director, Hoffman pierces the often-ironclad wall between main cast and ensemble, allowing downstage, spotlit vocal performances from just about everybody.

A few are worth singling out. Daniel Nohrdon, doubling as the production’s choreographer, injects Claude Bukowski with the necessary, and agonizing, doubts and sensitivities that will lead to his fatal conscription to Vietnam. Jeffery Cason Jr., as Hud, is the show’s most exuberant performer, channeling James Brown complete with a show-stopping backflip. Hoffman herself plays Jeanie, radiantly knocked-up and in unrequited love with Claude, imbuing her character with an endearing front couching deep heartache.

But this production’s most novel innovation involves a reduction in casting. For the key scene in which Claude receives his draft notice, rather than dress up a handful of her twentysomething cast members as sanctimonious, finger-wagging adults, Hoffman presents Claude’s elders as robot mannequins constructed from found materials, carried onstage and pantomimed by two members of the ensemble. In lieu of spoken dialogue, their incessant chiding is delivered via monotonous, computerized voice tracks. What better way to convey the generational divide between the woke, flesh-and-blood protestors and, in this case, literally mindless automatons?

But there are missed opportunities, too: The score is also played on tracks, and the presence of a live band would have elevated the urgency of the proceedings. The sound design, coupled with the acoustics of a high school auditorium, leaves much to be desired, with lyrics routinely struggling to be understood. The set, constructed without a credited designer, is merely serviceable, and clearly done on the cheap, evoking its hippie utopia with paper and sidewalk chalk—though you could argue that if the characters decorated it themselves, these may very well have been their only resources, and there is at least one clever sign tacked among the more-familiar antiwar bromides: “Draft Beer, Not Boys.”

Nohrden’s choreography likewise walks a tightrope between the professional and the amateurish, and it’s as difficult to praise as it is to criticize. There’s little sense of the clockwork timing often associated with great choreography; because the characters are high so much of the time, their movements tend to be haphazard, the dancers drifting on vapor trails of LSD and pheromones to their own internal rhythms.

This is especially apparent in the scattershot second act and its central hallucination sequence, which to this sober patron is frankly a waste of time. If it worked on Broadway, more power to it, but even in Lightning Bolt’s truncated version, it comes off as tepid, overlong vaudeville—a juvenile burlesque of creaky caricatures.

The climax, however, is undeniably powerful, from the poignant procession of wordless goodbyes on the eve of Claude’s deployment to the anguish-stricken performance of “Let the Sun Shine In” shortly thereafter.

As for the rest of Act Two? We would never recommend going to the theatre under the influence of a certain product provided, legally, at one of South Florida’s medical dispensaries. But it certainly wouldn’t hurt.