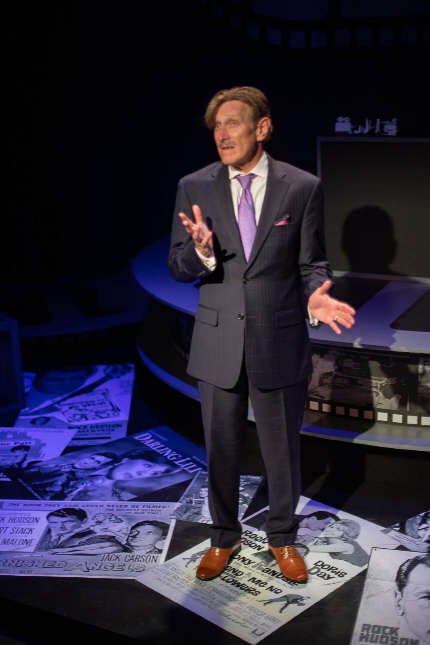 Michael Leeds’ world premiere play, Starmaker, ten years in the making, is getting its debut at Island City Stage. Early last year, it was featured as part of Jan McArt’s new play readings series at Lynn University. Now, here it is fully produced with a script that, while it could use a few tweaks, some nips and tucks, is ready for its close up.

It’s a memory play, of sorts, about the man behind the men (double entendres ensue): hunky male stars of the 1950s, who, while fooling the cameras as straight sex symbols, are hiding their biggest secret: they’re all gay.

Hollywood agent of the 1950s, Henry Leroy Willson (David Edwards) is the Willy Wonka of the Adonis factory, where he churns out beefcakes – men who set the standards for heterosexual hunks of the era. Men want to be them, women want to be with them. They, however, want to be with each other.

Leeds’ Willson is father, mother, teacher and mentor to his creations. Starmaker parades Willson’s talents for grooming guys from around the country to become marquee names, and for his knack in coming up with those names: Merle Johnson Jr., becomes Troy Donahue (Sahid Pabon), Francis Timothy McCown is Rory Calhoun (Samuel Maya), and Arthur Andrew Gelien is transformed into Tab Hunter (Sean Davis).

But, his biggest creation, and, in Leeds’ play, most difficult for Willson both emotionally and professionally is Roy Fitzgerald, whose marquee name Rock Hudson (Clay Cartland) becomes part of American pop culture: “Well, look at you, you’ll never be Rock Hudson,” is one of the many historically accurate scenes Starmaker holds up for one of its many comic bits.

A fact that doesn’t make it into the script is that Hudson was born Roy Harold Scherer, but took the last name of his stepfather, Wallace Fitzgerald, when he was eight years old, partially in defiance of his father leaving the family during the Great Depression. Too much trivia perhaps?

While this is a play about the rise and fall of both Willson and Hudson, Leeds’ character study is Willson. New York actor Edwards as the Roy Cohn-esque Willson imbues the character with multiple layers – the Renaissance man who knows knowledge is power, showing off his prowess by spouting quotes verbatim from literary masters. The script uses the device for Willson to break the fourth wall, and his literary musings somehow always fit in to the situations and challenges that Willson is conveying. Edwards plays Willson as relentless, unstoppable and manipulative, yet with more than a touch of insecurity. He’s the ugly duckling, the man behind the curtain, the Svengali who works at making others beautiful, yet finds himself alone. In a scene where he’s broken and pleading for a paid “trick” to stay with him, there is true desperation in Edwards’ portrayal, and when he entertains his gaggle of boys with his rendition of Mama Rose, there’s a sad poignancy to it.

The casting of Cartland as Hudson is an interestingly, wonderful choice. The versatile South Florida actor is able to find the heart and soul of this character. Cartland never imitates the screen star, and there is no attempt at make up to present a Hudson look-alike. Instead, the focus is on the emotional toll that’s played with genuineness. He’s the suffering movie idol who is caught between how he is expected to appear to the public and his real desires. Thankfully, there is no attempt at an imitation of the screen star. There are movie posters galore on the floor of the set to serve as the identifying element of the real Rock.

The four supporting players, Pabon, Maya, Davis, and the only female in the cast, Jeanine Gangloff Levy, play multiple roles, at times acting as a Greek chorus to Henry’s navigation through his chapters of life. Pabon also doubles as Hudson’s paramour Jack, who is based on multiple lovers in Hudson’s life.

Levy gets some of the best comic moments as Lana Turner, and also Willson’s secretary Phyllis Gates, who becomes Hudson’s wife until they divorce three years after their married. She’s also the time capsule taking us through each era as Grace Slick in the 1960s, then Donna Summer in the 1970s, then getting physical as Olivia Newton John in the 1980s. The campy, comic relief works, yet it almost seems out of place and breaks the cinematic ambiance that the play is wrapped in.

Starmaker doesn’t drown itself in history, although it does bring in facts such as the McCarthy-era Lavender Scare, and FBI director J. Edgar Hoover’s proposed quarantining gays and lesbians. It also deals with Hudson’s diagnosis of AIDS (Acquired Immune Deficiency Syndrome) in a time when AIDS had yet to be publicly acknowledged.

One of the greatest strengths of the script is that keeps its story centered in the eras in which it is set: 50s, 60s, 70s, 80s, while never making forward-looking preaching statements – if you wait for the “look how far gay has come in decades,” you won’t find it here.

And while it has many strengths, one of the weaknesses of Starmaker may be its placement in a Tinseltown time gone by. For a different generation of audience that isn’t familiar with Hudson and the sex symbols of the era, some of Starmaker‘s relevance may be lost. But a younger audience is now to whom this show is meant to have an appeal.

There is also a brief moment of full frontal nudity as Hudson runs off to go skinny dipping. While it plays as a bit gratuitous, it can be argued that it conveys Hudson’s devil-may-care attitude for risktaking. This is culled from a true story where Hudson breaks his collarbone two weeks before shooting an important movie role, and that he was also willing to play with fire that he could get photographed by prying paparazzi who were trying to out him.

The stage space adds to its homage to Hollywood, a three-level set made up of round playing areas that are created to look like film reels. Willson’s office is at the center, elevated, while the stage left lower tier is Hudson’s living quarters. The stage right area is used for various scenes. Scenic and lighting design is by Ardean Landhuis, costumes (and there are many, and they are spot on) are by W. Emil White, and depict the periods, with sound design by David Hart. Projections of the multitude of Hudson headlines when he passes away of newspapers from all over the world are impactful and are by Kevin Black.

While Starmaker focuses on the lives of real people in history, it is a classic beauty and the beast story. A lesson in “to thine own self be true,” the two faces of public and private life. About what it means to have it all, yet have nothing.

The production will no doubt get some script tightening and tinkering as its playwright sees what works in front of an audience. That should get it primed for productions beyond South Florida as it certainly has a universality and solid characters that should give it a shelf life outside of Island City.