Lion King Roars Back To The Arsht As Fresh as Ever 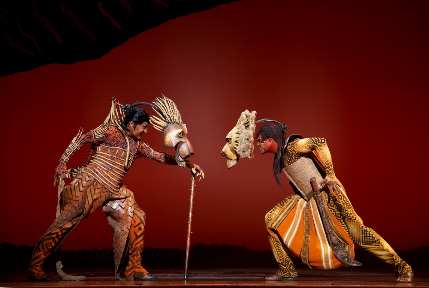 The procession of savannah creatures –magnificent lions, leaping, a lithe leopard, soaring birds and a story-high elephant – strolling up the through aisles and onto a theater stage in the opening scenes of The Lion King is still breathtaking no matter how many times you’ve seen it.

But that tableau of song, story and spectacle from the current tour on its umpteenth visit to South Florida not only still has the power to overwhelm, but makes you yearn for that mouth-dropping awe you felt the first time you were exposed to these theatrical possibilities.

If you haven’t seen the 22-year-old show in a while or you want to take someone who hasn’t seen it, be assured that the national tour at the Arsht Center, just seen at the Kravis Center,  is as fresh and vibrant as ever – something several tours of other shows can’t always claim.

While the crowd at the Kravis was noticeably more diverse than usual for their tours, the one at the Arsht was even noticeably more so. One result was the frequent enthusiastic outbursts of applause and cheers as this Broadway musical evoked African culture in its score, its lyrics, its design and its choreography

The well-oiled production is famous for virtually every gesticulation, inflection and raised eyebrow having been dictated and sternly insisted upon in perpetuity — with one exception. Yet this cast, which has likely been grimacing and screeching each moment on the road for months, still delivers performances that are as polished as wedding silver – yet it never feels that way. The actors, dancers, glorious singers and amazing band communicate a joy in their work.

Perhaps if this is your third or fourth visit, knowing every moment that is coming, the show does tend to grind on a little long, especially with such gooey ballads as “Can You Feel The Love Tonight?” But the energy, imagination, stagecraft, choreography and stunning score is unfailingly entertaining.

Besides the brilliant anthropomorphic physicalization of the performances, this time savor the score which somehow melds the heartfelt and throbbing genres of pop music and African rhythms.

What is different year in and year out are the copious puns to sustain the adults and the regular break-the-fourth-wall pop culture references such as referring to an African tapestry as looking “like a shower curtain from Tar-jay” or “That’s how you beat Angry Birds.”

Director Julie Taymor’s vision that melds costumes, masks and movement still can be thrilling and Garth Fagan’s sinuous choreography remains stunning, especially in the fluid execution of this chorus line. Granted, again, on your fourth or fifth viewing, Taymor was allowed to let her vision go on and on, but it’s hard to argue with the merits of two-story-high giraffes as if seen in a hallucinogenic dream.

As we wrote after its last visit: Taymor who can be forgiven anything, even Spiderman: Will The Last Person Leaving Please Turn Out The Light, so long as she left behind this work.

This entry was posted in Performances, Reviews and tagged Adrienne Arsht Center, Kravis Center for the Performing Arts, The Lion King. Bookmark the permalink.