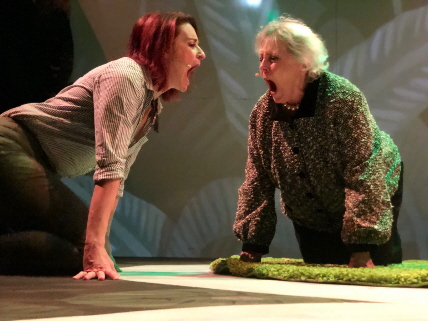 The oft-cited story, perhaps apocryphal, goes that when a New York City newspaper sent a theater critic to the Coconut Grove Playhouse in 1956 to see the first American production of Waiting For Godot, his review said something to the effect that he didn’t understand everything he had just seen, but it sure as hell was something significant.

Some audience members on opening night may have instantly understood how the multiple narrative threads and themes wove together and related to each other. Others, like this critic, struggled throughout the performance and on the ride home to make the connections that were meant to be there and likely were there.

But director Nicole Stodard and her fine trio of actresses have inarguably produced an engrossing emotional and intellectual puzzle to stimulate the heart and mind. Clearly, there are linkages about the yearning for connection, varied attempts at human communication, the limited power of language. But precisely how these elements compare-and-contrast should fuel copious after-show discussions at a neighborhood bar.

The basic premise is that 42-year-old college educator and linguist Brodie (the terrific Sabrina Lynn Gore) discovers in an ultrasound test that the fetus she carries from artificial insemination may or may not be born with serious flaws. Before the test, she thought that she would decide easily to go ahead with the birth or have an abortion. But seeing the moving image of the baby has caused grave doubts. Her lover and graduate assistant Dre (Stephon Duncan) tries in vain to help. Even less help is a neophyte counselor (Duncan) whose lack of experience and inept use of impotent language provides Brodie little concrete information or advice.

Brodie’s current professional project is documenting a Russo-European dialect that is dying out. A key element is recording the elderly refugee Cleva (Carol Sussman) as she enunciates phrases from the nearly extinct tongue. Cleva’s protective daughter (Duncan) is concerned that the project is only upsetting her ailing mother.

To get Brodie to chill out, Dre takes her to a zoo where they watch an ape (brilliantly played by Sussman) who supposedly understands 30 words by seeing colors associated with them. In fact, the ape (who speaks to herself in monologues we can hear) is simply fixated by the simplest of tasks such as inspecting what she is about to eat.

In one of the best written, acted and directed scenes, Duncan provides the incessant calorie-less prattle of myriad zoo visitors as Brodie and the ape physically strive without words to connect by matching each other’s physical movements, inspecting each other, trying to make sense of each other.

The performances under Stodard are wonderfully complex, and Sussman and Duncan create discernably different personas for the multiple characters they play. 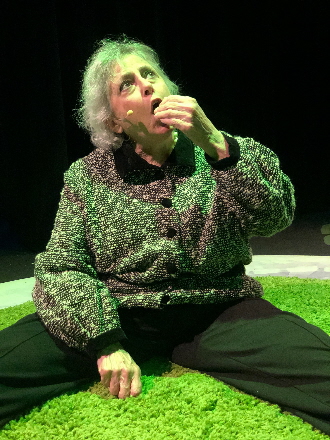 Sussman, who was memorable in Main Street Players’ Marjorie Prime last season, conjures the refugee you might find today in a condo community. Forced to resurrect her rarely used native language, dormant bonds summon up long buried shards of memories of her life overseas. And one scene later, she inhabits the persona of the ape, exuding a profoundly puzzled and fearful expression.

Gore, fresh off the role of the sultry disaffected urbanite in Measure For Measure Theatre’s Murder Ballad, once again exhibits her considerable range. Her Brodie starts off as a relatively confident smartest-person-in-the-room, but becomes increasingly unraveled in her journey.

Stodard deftly stages the movement, sometimes intentionally stylistic, sometimes invisibly. The pacing is contemplative pace which may bother some people or please others.  Further, by having the actors double as stage hands, the scene changes take twice as long as necessary as they also change costumes, slowing the evening. Fortunately, Stodard as co-sound designer with Bree-Anna Obst provides perfectly calibrated moody electro music during the changes.

Madeleine George is the author of numerous works including The (curious case of the) Watson Intelligence, a Pulitzer finalist. Whether the lack of clarity in the analogous connections on display is in her script, which has not received universal praise in other productions, or with Thinking Cap’s production is impossible to say.

But in the end, Stodard and company have once again delivered a thought-provoking and unique theatrical experience that will stick to the inside of your consciousness for some time to come.