Love Is A Battlefield In Casey Dressler’s The Wedding Warrior 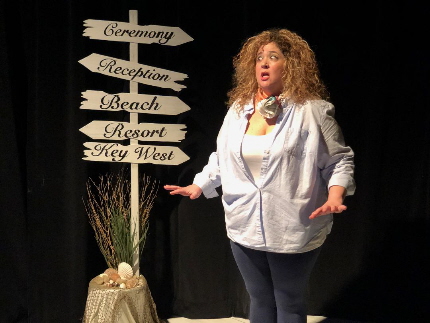 Casey Dressler has been kicking around her one-woman show The Wedding Warrior for five years. She first began performing the show in June 2014, and it’s found a fit at Fringe Festivals  —  Edinburgh Fringe, Chicago, New York, and Fort Lauderdale Fringe Festivals. It’s had runs in New York, and played in 2015 at The Vanguard for just four performances. Now, it’s at The Vanguard in Fort Lauderdale again; this time for a full run.

Dressler plays alter ego Casey, a wedding planner at a Florida Keys resort. She’s passing the torch to a new wedding coordinator who is panicking over the claps of thunder and torrential rain that is going to sideline the wedding and move it indoors.

Yes, it’s a wedding planner’s worst nightmare, but Casey tells her there are more mishaps and mayhem in the job and proceeds to recount one of the worst stories of her planner career. Nothing could compare to the Kunkle wedding, she tells the novice. It’s a segue to introduce a number of memorable characters, with Dressler playing them all.

One of the most daunting challenges in a one-person show with multiple characters is to make each different enough that the audience never confuses one for another. There’s no doubt as to who in this show is who. Dressler has achieved this in the writing, for one. There’s Connie, the resort’s front desk receptionist, a Southern born sixty-something where every other sentence is a homespun expression: “You’re as nervous as a long-tail cat in a room full of rocking chairs,” she drawls.
Betty Steinhorn is the Mama Rose mother of the bride, whose sole mission in the show is to bark orders and create chaos.  Daughter, Jessica, is the bride-to-be, a Valley Girl ditz who asks the wedding planner to check her teeth for lipstick and tells Casey she needs to be part of her bouquet toss.

Characters weave in and out of the show, some making one appearance, while others recur. She accomplishes quite a feat when the audience is so invested in the story and the people that, at one point, the illusion is that there are three characters interacting on stage even though Dressler is solo on stage playing just one of them.
A fan favorite is Manolo, the cigar roller who mixes up which tobacco he has in which pocket is one of the most original. She gives each of them a movement or a characteristic that creates distinction. Mikey, the “I dunno” busboy has a shrug; Manolo rubs his hand over the illusion of a beard.

Other characters include the wedding crasher who is dancing with herself appropriately to Billy Idol’s “Dancing With Myself,” and Sarah, the maid of honor, who has a food intolerance to everything.

There’s the drunk cynic who ends up face down in her piece of wedding cake, who believes fairytale romances are bull. In the golf cart as she’s being given a ride back to her resort room, she trashes the story of Cinderella. Rats making dresses, c’mon really? Earth mother Earthy Berthy is introduced as the final character. She’s the psychic healer and licensed notary who whirls in circles in a late-night infomercial that catches Casey’s eye.

This evolution of The Wedding Warrior has come full circle in some ways with this production. The idea for the show was hatched over cups of coffee shared between Dressler and South Florida actress Elena Maria Garcia. Dressler would recount stories from her days as a wedding coordinator in her home town of Islamorada, knowing there was material in there somewhere for something. Dressler wrote it in early 2014, and in fact, it made its premiere at Garcia’s Bluedog School of Acting in Plantation.

Garcia, who has her own comedy, a one-woman show, ¡FUÁCATA! Or a Latina’s Guide to Surviving the Universe, directs this staging. What that direction adds to the foundation are characters that are more distinct than the first run at The Vanguard, and a better grasp of the comic moments and attention to comic lines so that they pack more punch.

The writing is original, and the script has enough contrast so it doesn’t fall into a trap of one note. A crafted lull is wonderfully placed towards the middle.  Black and white projections (designed by Bree-Anna Obst) – two headshots that appear on the back wall – show a man dressed in a military uniform, and another of a 1940s-esque woman. Billie Holliday begins to play. Connie sits in a chair and recounts the story of her parents and their true love. The story is touching with a surprise comic ending.

The highs are the wedding planner’s battle for the bouquet, (there’s a reprise of that scene, which is just right), and a few other moments when Manolo gets the father of the bride accidentally stoned, and as Casey prepares her “troops” for combat as the wedding is about to begin.

Dressler creates atmosphere through many of her specific actions, such as how she carefully scoops up the train of the bride’s dress, or recounts so descriptively the story of wedding lanterns, in the colors of Mermaid and Guava being whisked away by the wind and drifting down to the beach.

The appeal, too, is in the genuineness in which she constructs each character. The only flaw is that in her keeping pace with the exasperated rush built into the comedy, some of the lines get lost, and are difficult to hear in parts.

The Wedding Warrior is light fare, a romantic comedy romp. It’s all together entertaining. Hopefully, Dressler continues to work to develop the one-act even further. At a little under an hour, it leaves you wanting more.

This entry was posted in Performances, Reviews and tagged Casey Dressler, Elena Maria Garcia, The Vanguard, The Wedding Warrior. Bookmark the permalink.