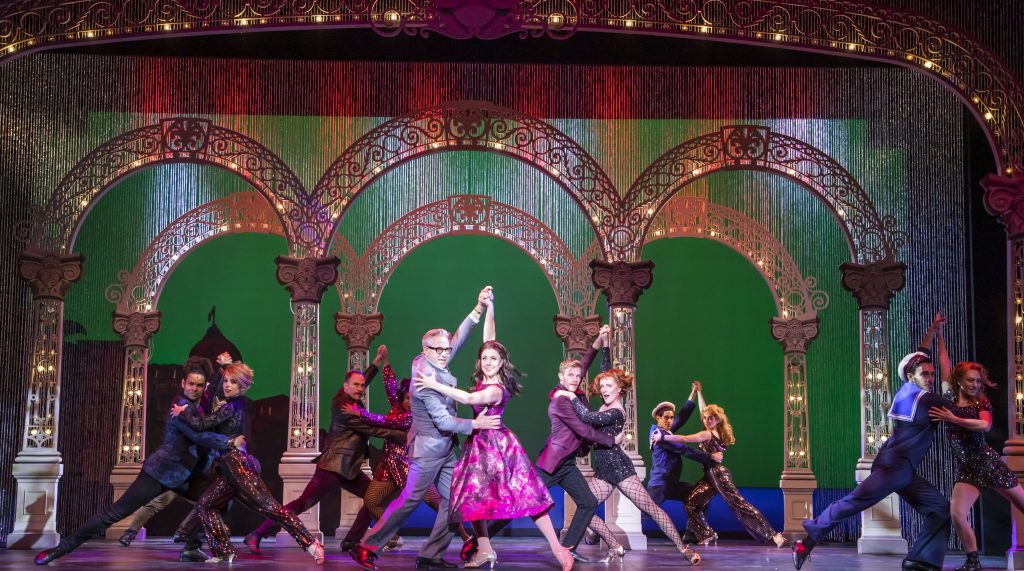 Sometimes all you want out of an evening of theater is not Lear or Burr or Seurat. But just fun. Escapist laughter-laden fun.

Dovetailing beautifully with the delayed grand opening of the Maltz Jupiter Theatre’s newly expanded home –- a Shakespearean saga in itself — the daffy musical Dirty Rotten Scoundrels is a welcome distraction from headlines and deadlines.

The Maltz has pulled out the stops for its first show since March 2020 when it shut down How to Succeed in Business Without Really Trying after one preview – and then stayed shut while it focused on its $36 million building project.

It’s just what your psychiatrist ordered.

In a tony tourist town on the French Riviera, Lawrence Jameson (David Engel) is a devastatingly suave silver fox who successfully cons rich women out of tens of thousands of dollars by claiming to be an exiled prince trying to fund patriots fighting to reclaim his country – and he, of course, seducing the ladies during the appeal.

His well-established routine, aided integrally by the equally corrupt police chief (John Scherer), is upended by the appearance of another con man Freddy (Lukas Poost). He’s out for the same dollars, but his blunt, crass, boorish mien is the precise opposite of Lawrence’s elegant approach. Lawrence is a smooth martini and Freddy is a beer left open on the counter for two days.

Initially, Freddy wants to learn Lawrence’s more sophisticated tricks and apprentices himself. But eventually he wants to break free.

Making it difficult is that Muriel keeps returning in hopes of helping Lawrence’s freedom fighters.

If somehow you don’t know what happens next, we won’t spoil it. But there are unexpected reversals and a lot of unadulterated fun with all the intellectual subtlety of a Saturday Night Live skit. The show is shot through with cute repartee, blue humor and droll winking. At one point, Muriel shows up after intermission even though her story seems to be over. She explains, “I can’t believe I can’t be useful to someone in the second act.” Which of course she is.

A word of warning: If you adore the source material, the 1988 Frank Oz film starring Michael Caine, Steve Martin and the late Glenne Headly (and I do), do not come looking for it.

Other than the broad outlines of the plot and characters (stolen from the 1964 film Bedtime Story with Marlon Brando and David Niven), the creative team here has written a musical comedy slavishly obsessed with the genre’s unique tropes and traditions. Start with the fact that this show doesn’t let 163 seconds go by without breaking into song which may or may not really be needed. Okay, 97 seconds. Don’t believe me? Bring a stopwatch.

A quick example is when Jolene surprises Lawrence with her unshakeable intent to take him home and marry him, her dream takes form in a huge production number, “Oklahoma,” that is hilarious – and which has virtually nothing to do with advancing the plot, character or anything else other than to fill the audience’s hunger for a good ol’ Broadway production number at that point in the show. (Actually, this is a tradition in a hundred musicals that have memorialized the same tactic.)

Characters regularly break into introspective songs or raucous comic numbers. David Yazbeck’s (The Full Monty) score is filled with peppy music that will win you over. His lyrics range from sly wit to utter nonsense to occasionally disappointingly lame.

Representative of all three qualities: When Freddy masquerades as soldier seeking money for a cure for his paralyzed legs (due to a romantic wound not a battle injury), he sings while seducing Christine in a bedroom, “Love is my legs and you are my love. So you are my legs, my love.”

All this has to have kept music director Eric Alsford very busy, but once again he has succeeded guiding the full-throated sound of his band and molding the fine voices of his cast.

Jeffrey Lane’s sometimes by-the-numbers script still has plenty of laugh out loud lines including some cute meta references through the fourth wall. And it has been tweaked a bit for Florida: When Freddy imagines all the rewards of the upcoming big score, he says, “I can finally have lunch at The Breakers.” And then there are the groaners. Anticipating a major problem, Lawrence refers to an auto-da-fe; Freddy responds, “I drive a Fiesta.

Crucial to all this is director/choreographer and Maltz veteran Mark Martino (Crazy For You, Les Misérables) who has staged this rollicking gusto with subtly infused smoothness and sharpness, the gift of decades of experience. Especially notable is his character-differentiated physical comedy suffusing everybody and everything, most obviously Freddy’s loose-limbed physicality.

All the actors dive deep into the mission to make the fun infectious. But the standouts actually are Cody and Wyatt who deliver seemingly uninhibited but quietly skilled comedy gems that echo the dexterous expertise of Carol Burnett and Lucille Ball. Either would make a great Ado Annie.

Appropriately, Engel’s Lawrence inhabits someone born with grace and Poost’s Freddy is vulgarity personified. Amazingly, we never hold it against these unapologetic greedheads that they are stealing people’s money; perhaps we envy their rejection of social mores.

If Engel is restrained liquid charm, Poost chews the scenery, bugs his eyes out, lets his body fly all over the place and twists his hangdog mouth to embody real and feigned astonishment.

As always, the Maltz has some of the best creative staff in the state and beyond: Kirk Bookman’s environmentally fluid lighting, Marty Mets’ copious rimshot sound effects slipped in seamlessly and with crucial precision by stage manager Mark Johnson. There’s Leon Dobkowski’s seeming bottomless closet of gowns, jewels, tuxedos and uber-denim outfits for “Oklahoma.”

And leading the kudo list must be Dan Kuchar’s scenic design of physicalized elegance, garden arches backed by curtains of glass beads and roll-on sets with more detail than some productions’ full stage sets. One advantage of the redesigned stage is the addition of a full fly space – the area above the stage from which backdrops can be dropped down – and Kuchar has taken full advantage.

Is this a “great” musical? No. Is this even one you will remember a couple of years from now? Not likely.

Note: The first week of the three-week run was cancelled in part due to the late scheduling of inspections by the city that were approved eventually. The Maltz leaders hope those people will agree to be seated in the second week of the show.

COVID Protocol: The Maltz is currently observing all precautions including requiring proof of vaccination or recent test at tables outsider the front door, then expecting everyone to wear masks at all times in the lobby and auditorium.