Posted on November 1, 2013 by Bill Hirschman 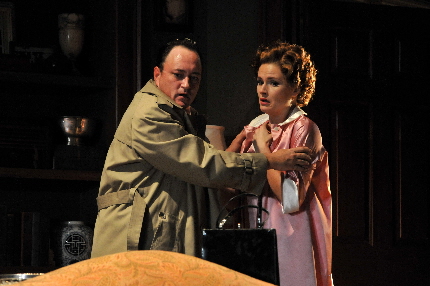 Murder-minded husband Todd Allen Durkin tries to calm his wife Claire Brownell after she kills the man she doesn;t know he hired as a hitman / Photo by Alicia Donelan

If you’re under 60 and wonder what theater was like back when it was as popular as film and far more influential than the upstart television, you can see a prime example in the Maltz Jupiter Theatre’s time machine production of the 1952 potboiler Dial M For Murder.

Younger audiences weaned on more sophisticated and manipulative movie thrillers will notice a distinct lack of electricity or the nail-biting tension that enthralled the public back in the Eisenhower Era. But director J. Barry Lewis gently propels the tale with an inexorable forward motion that never flags and always makes you feel the noose tightening centimeter by centimeter around one character or another.

The suspense is leavened (just to loosen you up for further shocks) by bright bursts of humor. Either Lewis and/or lighting designer Paul Miller came up with a humdinger a few minutes before the climax. It does breaks the illusion of reality with a meta-joke, but it’s so funny that you have to forgive them.

After 60 years, it’s unlikely we can give away any spoilers (Rosebud is a sled, folks). Retired and over-the-hill tennis pro Tony Wendice (Todd Allen Durkin) blackmails a former classmate and current gigolo Capt. Lesgate (Durkin’s frequent stage partner Gregg Weiner) into a plot to murder Wendice’s wife Margot (Claire Brownell) for her money. Margot foils the plot by stabbing Lesgate to death with scissors, but becomes the chief suspect because Wendice has framed Lesgate to look as if he was blackmailing Margot over her affair with American mystery writer Max (Jim Ballard). Chief Inspector Hubbard (Colin McPhillamy) initially makes the case that has Margot awaiting execution, but the tables turn more than once in a series of cat-and-mouse games between various characters.

The minor miracle accomplished by Lewis and the cast is that the script may feel dated, but the production never feels musty. It’s not a museum piece so much as a peek back at how it was done, sort of like watching all-male casts perform Shakespeare at the restored Old Globe Theatre in London. But it is a Swiss watch of construction as webs are spun, backstories are told and secrets are revealed. The only weakness in the script is by comparison: In the famed Alfred Hitchcock film version, the attempted murder is drawn out as the master of suspense would. Here it flies by in perhaps a minute of stage time.

An even more notable feat: Lewis is famous for breaking down complex material and making it comprehensible such as the quantum mechanics in Palm Beach Dramaworks’ Copenhagen. But this marks the first time in nearly half a century of watching or reading this play that I’ve understood the bloody Byzantine business of the crucial switching of the keys, which is far more opaque than fourth order linear differential equations.

Durkin, an actor known for his manic energy and his inventive comedy, persuasively portrays the gone-to-seed tennis pro who wears a genial cheery exterior. The few chilling moments in the show occur when Durkin lets the mask slip and we see the dissolute, morally bankrupt animal underneath.  He does this with a look or a vocal change, once simply by the way his body slows down with his back to the audience. His Wendice never comes across as despicable or coldly calculating as some other actors have made him, but his choices still work.

McPhillamy, who was downright brilliant in last season’s Exit The King at Dramaworks, is the actor most at home in his role. His note perfect Hubbard never comes across as a bumbling plodder despite his tweedy appearance and laid-back manner. Instead, McPhillamy embraces Hubbard’s incisive intellect, only occasionally masked by misdirection.

Brownell, who gave an impressive performance as the spoiled second wife to McPhillamy’s king, is just adequate here. Knott really didn’t write a particularly three-dimensional role for Margot and actresses who have succeeded have infused her with their own charisma. Brownell allows Margot to be pretty much a bland cipher.

Weiner and Ballard are reliable pros virtually incapable of a bad performance, but neither is especially compelling this round as we know they can be. It’s good to see Dan Leonard back in the tiny role of the police officer; someday, directors are going to remember what a terrific performance he gave as the doddering old man in Dramaworks’ The Chairs.

The production values for the play may be the unadulterated triumph of the evening. Aficionados of set design don’t need to check the playbill for the name of the man who seems to have transported this homey well-to-do wood-paneled apartment directly from London.  It is classic Michael Amico. His work is accented with period perfect objects from the mounted rotating globe to the electric floor heater to the silver trophy cups, chosen by Sima Bressler.

Their partner in verisimilitude is Paul Miller who washes the living room with photorealistic tones from the white bright morning light streaming through the garden windows to the weak amber pools of illumination from table lamps failing to dispel the gloom of a darkened room.

Marty Mets has laid down a soundscape of phone rings, soft raindrops after a thunderstorm and other sound effects, but he has them emanate from speakers all over the auditorium, increasing the sense of the audience being inside an environment rather than distanced observers. He has also designed eerie symphonies of disparate sounds like murmurs and atonal chords to keep the audience unsettled while the stagehands alter the set during blackouts.

Geek notes: Dial M For Murder was the first play written by Frederick Knott, universally rejected until he sold it as a BBC-TV script in 1952 (a droll touch since the play tweaks the nose of the new medium several times). The same year, it became a smash on stage in London, followed a few months later by a similar success in New York. Hitchcock and Knott made a few minor changes for the 1954 film version with Ray Milland, Grace Kelly, Bob Cummings and John Williams (the instantly-recognizable British character actor, not the Star Wars composer). Knott only wrote three other plays and only one, Wait Until Dark, was a success, 14 years later. But they became staples of regional and community theaters, keeping Knott financially comfortable until his death in 2002.

This marks the opening of the Maltz’s 11th season and is the first in the newly renovated facility. To read about the changes, click here .  To see a slideshow of photos connected to the renovation, click here.

Dial M For Murder  plays through Nov. 10 at the Maltz Jupiter Theatre, 1001 E. Indiantown Road in Jupiter. Performances at 7:30 p.m. Tuesday-Friday, 8 p.m. Saturday, 2 p.m. Wednesday, Saturday and Sunday. Running time: A shade under two hours including one intermission Tickets are $52-$59, available by calling (561) 575-2223 or visit  jupitertheatre.org.