Memphis The Musical Keeps Rocking The House At The Arsht 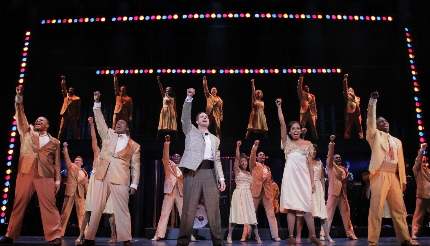 Touring cast at the finale of Memphis / Photo by Paul Kolnik

Say what you will about the joys and shortcomings of Memphis the Musical — starting with exuberant performances and unimpressive lyrics –it has one of the most infallibly infectious finales.

When the cast lines the stage in gold outfits and kicks out the anthem “Don’t let anyone steal your rock ‘n’ roll” and utters those deathless lines of poetry “Na, na, na, na, na, na, na, na, ” it’s a joyous validation for the Boomers that their rebellious embrace of “that music” a half-century ago was right all along. This Broadway Across America tour at the Arsht Center still gets the crowd on its feet long before the dictates of the now-standard South Florida Standing Ovation.

The journey to that moment is a pleasant and often rousing fable that fictionalizes the true story of a ne’er-do-well white disc jockey who pioneers playing “race music” on mainstream radio stations and jumpstarts national acceptance of the emerging genre of rock ‘n’ roll.

The show won four Tony Awards in 2010 including best musical, and composer/lyricist David Bryan (of Bon Jovi fame) and book/lyric writer Joe DiPietro (I Love You, You’re Perfect, Now Change). Admittedly, it was a strange year for musicals in which the competition was Green Day’s American Idiot, Fela! and Million Dollar Quartet. Based on an idea by producer George W. George, the show evolved through several regional theaters over several years before coming to New York under director Christopher Ashley and choreographer Sergio Trujillo.

The story about Huey Calhoun’s promotion of R&B parallels the romance between the unvarnished redneck Huey and the sultry black songstress Felicia. Tracking their considerable problems conducting an interracial affair, Memphis directly confronts the racism of the 1950s. But it Disneyfies the healing power of music in which the races find common ground and some grudging understanding. Yes, rhythm and blues did erode societal barriers, but if only it had been as simple as playing rock music to get teens of both races jumping rope together on the playground. Perhaps that reflects the heedless enthusiasm of Huey who seems ignorant of the consequences of what he’s doing. Someone could and does get seriously hurt pursuing what he does.

Essential to a successful production of Memphis is the casting of the two leads and the production has had phenomenal luck finding performer after performer to succeed each other in these roles that require not just strong singing chops but scorching charisma.

This round, Huey is played by Bryan Fenkart who was a stand-by in the Broadway production. Sporting a molasses drawl, Fenkart exudes the blinding and blinded enthusiasm of this illiterate social misfit who finally finds something he’s good at. Fenkart doesn’t do much differently than his predecessors who created a template of a lovable and loving man never quite comfortable in his own body let alone the world he was born into, but Fenkart does it very well. For all his hell-bent propulsive ambition, Fenkart’s Huey is painfully aware of his limitations that will result in a modest future and cost his relationship with the rising star Felicia. He’s especially effective displaying Huey’s awkward body language that echoes a gangly swamp crane trying to find his legs after a three-day drunk. He also has Huey’s naiveté that is both endearing and will prove his fatal flaw.

Felicia is normally played by Felicia Boswell, but on Tuesday, understudy Kelcy Griffin stepped in. If someone as strong as Griffin is the second-string, we can’t imagine what Boswell must be like. Besides being ravishingly beautiful, Griffin caressed every song with a voice of molten caramel, alternately capable of tenderness and fire. She communicated Felicia’s practical wariness of a relationship with Huey, as well as made credible her desire to choose career over romance.

Admittedly, the two vibrant actors didn’t exhibit much chemistry together Tuesday, but we’ve never seen much chemistry among any of the pairings in previous outings.

The rest of the cast is adequate, notably Sondheim veteran William Parry as Huey’s boss at the radio station and Julie Johnson as Huey’s washed out mother who shines in a pointless but roof raising number “Change Don’t Come Easy.”

Another major asset is Trujillo’s period choreography executed by a troupe that effortlessly glides, slides and spins.

Bryan’s original score is such an inspired encapsulation of early rock and its roots in gospel music that you’d think many of the tunes were really B-sides you missed growing up.

The words by DiPietro and Bryan are pretty bland, even coming from the mouths of intentionally unsophisticated characters. Fortunately, you can’t understand them when more than two people are singing, due to a lack of enunciation and poor sound mixing. You want to make an appointment with your audiologist until you remember that the problem varies from musical to musical, and that the Florida Grand Opera has no such problem using no amplification at all! Perhaps that last crack is unfair, but it does make you wonder what’s going on during sound checks. Maybe FGO could lend visitors their supertitle screens.

Side note: Like most entries in Broadway Across America’s tours in Miami,   Memphis is only at the Arsht for a week. We don’t know how well the shows are selling, so the economics may be prohibitive. But we wish shows would settle in for a longer run.

For promotional videos including large chunks of the production, and photos, click here.

This entry was posted in Performances, Reviews and tagged Broadway Across Miami, David Bryan, Joe DiPietro, Memphis. Bookmark the permalink.